I’m OK with the resolution of the terrain as it stands. I just hope they can sort out the colour differences so you don’t suddenly fly over an area that’s 10 shades lighter or half a field is brown and the other half deep green.
Perhaps I’m being too picky, my first flight sim was on the Commodore 64, a split green and blue screen and a black wavy line for the mountains

If BuffyFoster is correct and Blackshark is doing the colour matching then hopefully in time it will look better without any Bing updates.

New photogrammetry data for Japan on the left. Previous autogen & OSM building data on the right by BlackShark.Ai.

Might want to consider a tiny bit of colour correction on rooftops and building materials to escape that green-tinge we see globally so objects visually blend together better. Not just a matter of photogrammetry having day-lit baked lighting data in the textures but also partially that existing building materials are a touch bit drab.

Photogrammy transition is usually accompanied by a colour change. An example can be seen here, which clearly shows the outline of the Photogrammy region:

I did a flight from Montreal City to Quebec City, and here are the textures of Quebec City and it’s the same problem for Montreal city., I use ‘‘ultra’’ settings. It’s been happening since I installed the new update, [Microsoft Flight Simulator 2020-10-03 14_21_43] And the graphics quality of the game has dropped since there are updates, that’s my opinion See you 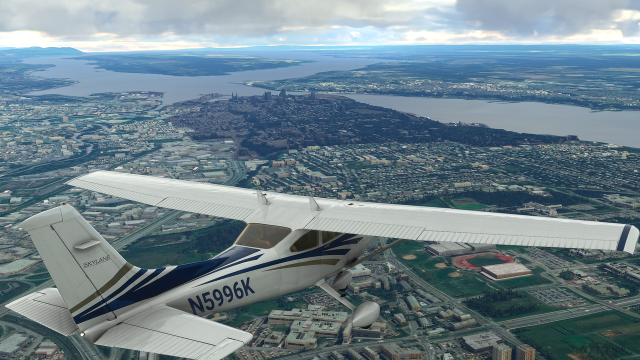 The transition is jarring. Is it possible for the sim to automatically colour correct the transition to match the surrounding terrain?

For your information, this problem appeared with the last update and it would be nice if it could be fixed

Here is the city center of Montreal with the last patches… and the textures have changed also they are less beautiful than before. 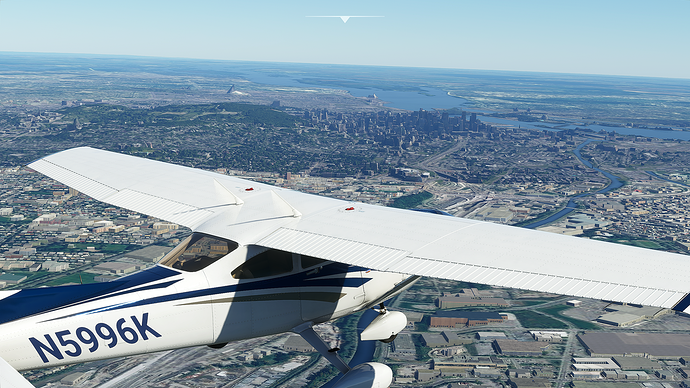 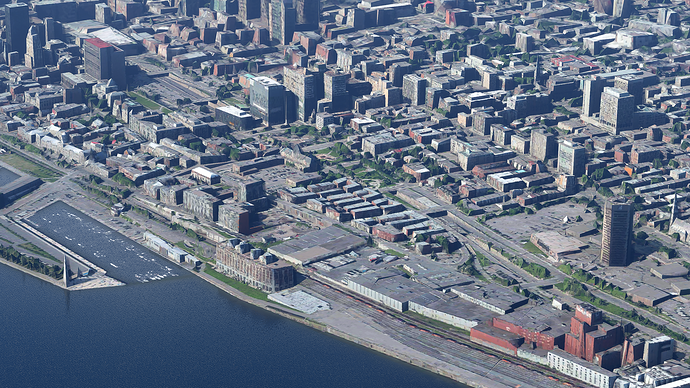 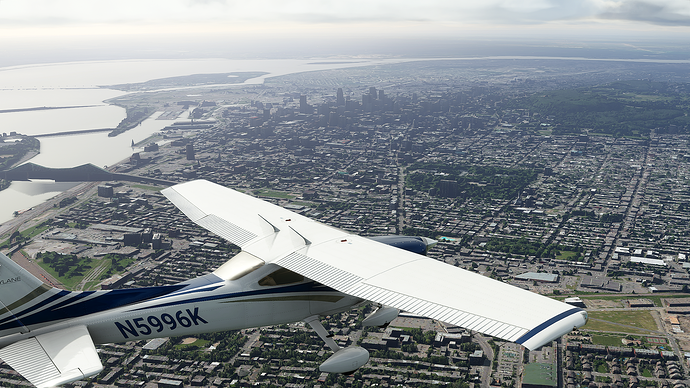 I play in Ultra since August 18th

Slightly different thing here - happened yeaterday (19th October) but only at one place. The south west corner of The isle Of Man near Ronaldsway airport EGNS. Other flights in UK - as normal - no problems.
It was a ‘rolling discoluration’ of either extra green or that purple tint. The phenomenon moved with my aircraft - affecting those squares near it (all round) but faded away as I left the area for the centre of the island and came back on returning.
So it was a temporary colour change in the vicinity of the aircraft and a return to normal behind it.
Anyone else seen this? 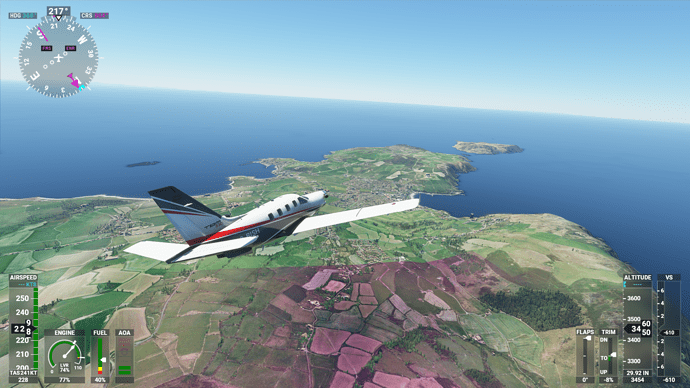 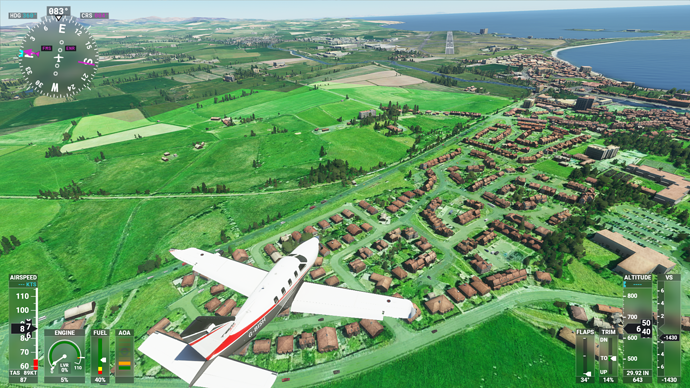 The phenomenon moved with my aircraft

It happens in normal mode and I tried it again yesterday evening - same thing - confirmed by another flier with a different aircraft (I also tried different ones).
I have not noticed it anywhere else in UK/Ireland - just close to Ronaldsway and to the west of it.
Also the same areas have the same colours - bright green near the airport and purple on the opposite coast (west of it).

I just tested this area. I also get the darker green populating in about 800 to 1000 ft AGL. Over 2000 feet they start to go back into the “normal” green terrain (screen capture in game 2K monitor).

Also, the purple… those I get too when approaching the hills (screen capture from video 1K).

I’ve actually never experienced this before. Weird how it pulls in/out those dark green tiles and the purple for the hills.

YEs I forgot to mention that when we tried it last night it was only below those heights. I will try reporting it via Zendesk.

I’ll report that too.

I’ve actually never experienced this before. Weird how it pulls in/out those dark green tiles and the purple for the hills.

I see this also. Considering it moves with you, I wonder if the streaming is using two different data sets (hence two colors) for two different LODs?

From what I see, that is exactly what it’s doing. You described it well.

I’m glad you posted this (I voted and made a Zendesk report) because it was driving me nuts trying to figure out what’s going on. Most of the posts re: photogrammetry, LOD, and such focus on melted buildings and whatnot and I couldn’t really find anyone mentioning this weird brown/grey dark patch over the photogrammetry cities.

I got a medium-high spec computer, 2560x1080 @ 70Hz, run mostly HIGH settings with Object and Terrain LODs set to 200, no scenery mods. I got gigabit internet, confirmed that Xbox Networking is happy, and inside MSFS 2020 itself I confirmed that Bing Data and Photogrammetry are turned on and using data. Rolling cache disabled.

It’s happened to me in Calgary (see attached) and Tokyo, among others. Tokyo is especially a bummer because Japan is such a featured item. 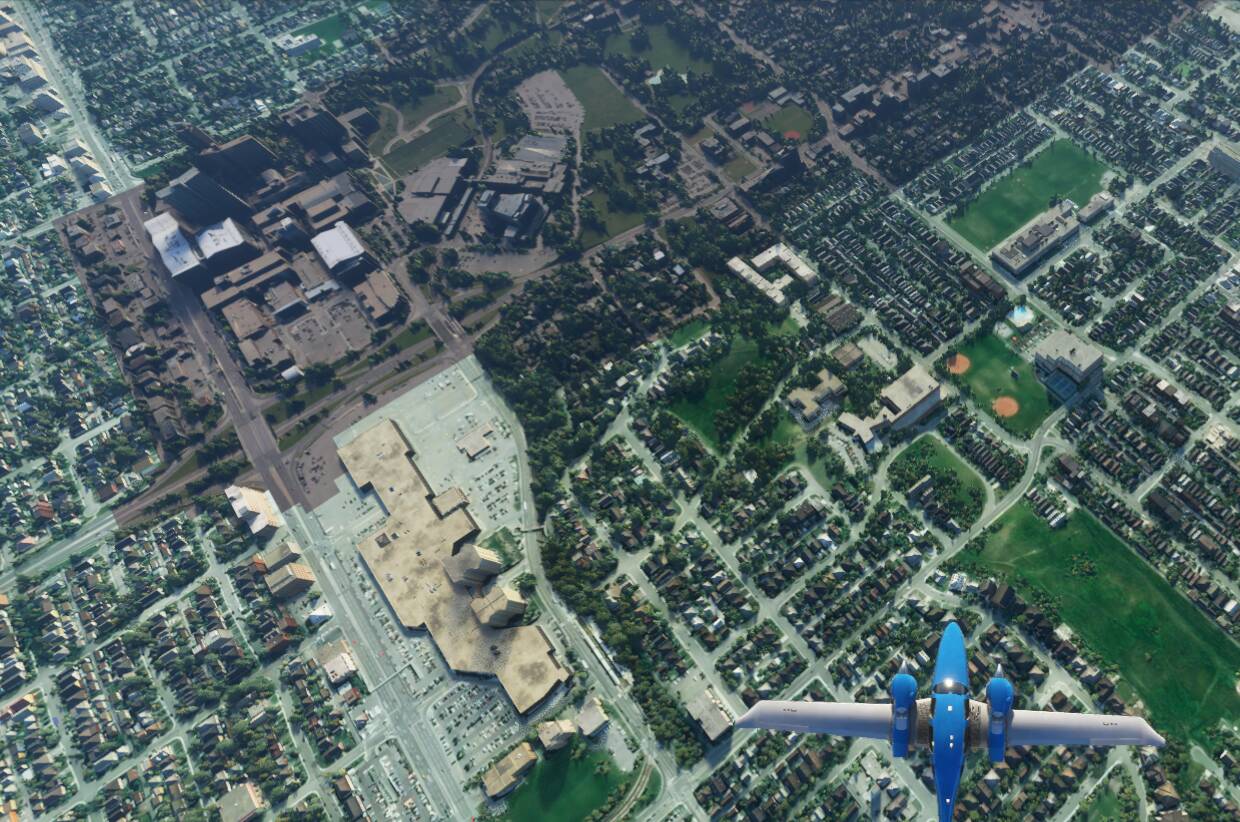 Sorry for the double post but I just took a look at Calgary on Bing and it also shows weird brown blotches (far left) and a harsh transition from brown to green (far right).

I guess now that I know this is a problem with Bing, I can stop hunting around for solutions specific to MSFS.

Thanks for posting. I do think it’s the data from bing rather than anything “in game” as it were or settings related. Hopefully they can do a bit of blending or somehow apply some “brightness” to the PG. If you are only seeing PG in view, then it looks fine, but against the lighter background scenery it definitely doesn’t look great

There is also a problem with cloud shadows and even the clouds themselves in the ground texture. 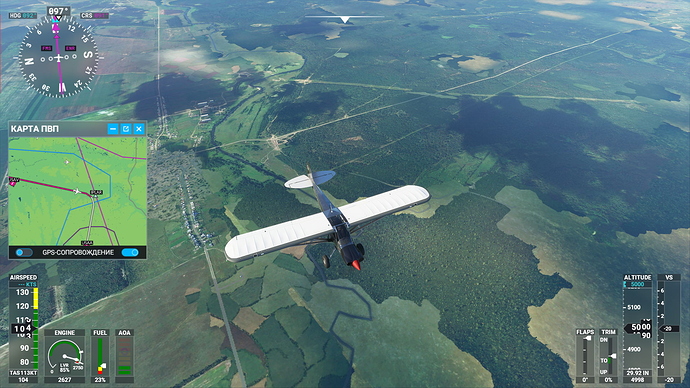 Greenish hue is clearly seen in this transition zone between the downloaded cache and the regular (photogrammetry) scenery. Hopefully the roads will look less ‘mossy’ in the future updates…
Shows the value of downloaded cache!!! 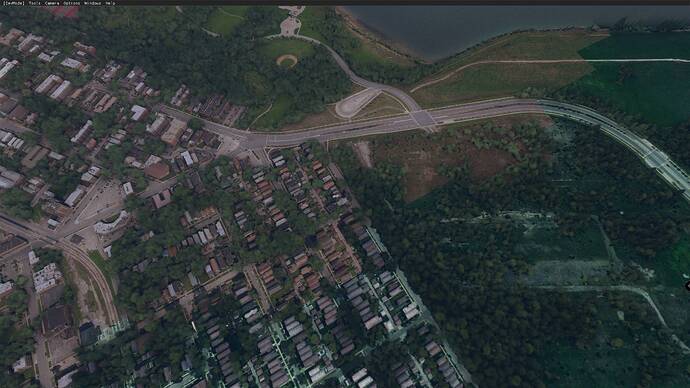 This is the south side of Chicago near the lake