Improve Visibility For Multiplayer Aircraft So They Don't Disappear

I’m part of a group that flies multiplayer formation constantly. I was really disappointed to discover that multiplayer aircraft have a number of issues with visibility in MSFS.

Aircraft are only visible within about 1,000 feet, if that. Beyond that range you can only see the tag (if it’s turned on) and the tag doesn’t even show the distance to the player! Very unhelpful and very difficult to rejoin on someone as they suddenly snap into view only when you are on top of them.

Once in formation, the other aircraft begin to fade away if you get within about 25 feet of them. That is no good for the close formation we usually do.

I am really hoping that a workaround can be found (maybe similar to the small object radius fix in FSX) or put into place with a future update! 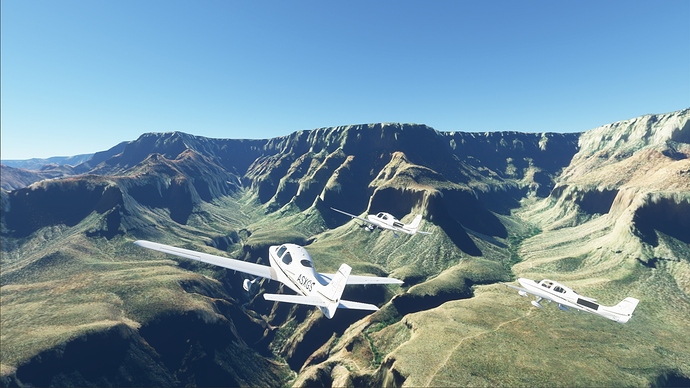 The same problem here. We was flown yesterday in Formation and the feeling was realy poor if the other Airplane ervery 5 seconds fade out.
Long time ago in FSX there was a camera.cfg with a entry: clippingMode =0/1 this fix the problem in FSX. Maybe is there in MSFS a similar entry as a workaround?

Yeah there is also the problem that if too many players are in one spot not every plane is shown. We had this problem during some ATC Events where too many planes where on the ground

I noticed that with a large plane the other planes are faded out further away than with a small plane.
this could be the reason why you haven’t seen some planes at all.

Yeah the reason was that we were about 50 planes at the Ground at KOSH for an airshow event. All being GA planes

Hi there, an option to don’t see through close planes would be nice, it’s pretty annoying for formation flight.

Also even if two players are in the same group they are not sure to play together (on same server).

The draw distance for both ‘far’ and close planes is very irritating when trying to fly as a group. We really need the option to change the behavior for showing other aircraft.

I am also having many issues with not seeing any other players despite being online, on the same server. We can see each other on the world map and even spawn on each other’s position, but once I join in there is simply no multiplayer traffic. It’s not my settings - after ending and restarting my flight several times they usually show up. Last night I spent 30 minutes trying to see my friend before giving up and quitting.

I feel exactly the same, very frustrating to join one player, even more if you can’t fly close

Honestly I pretty much only use flight sim to fly in formation with friends. Until we get a fix for this, it’s just a scenery simulator for me

Approve, this see throught thing must be removed or mad as an option for multiplayer and draw distance increased.

Exactly, like for landing gear for other plane the lod change is too close, it’s a little bit weird while waiting at gates to see other plane land without gear, and seen it pop once it being closer.

Is there a way to disable other planes from ghosting out or disappearing when you fly in close proximity to them?

Anyone found a solution for this? I’m doing close flying with the MB-339 in VR and it really sucks to see the other plane disappear which then causes me to lose my orientation in relation to it

It’s a pity, since if you do close formation flying with a friend, other plane fades out as soon as quite close…this really seems nonsense.

I’ve of course tried to set damage/crash to OFF, AI Off, multiplayer set to Group Only…but no changings.

Any method to remove and forget this odd ridicolous feature?

They could maybe make that protective bubble a little smaller, as they seem to fade out before you actually touch.

Yes, but I keep believing that this protecting bubble is nonsense.
Why, at tleast in in VR, we can enter with the plane into an airport passenger bus, or into a car or a lorry…but as soon as approaching another plane, it fades out?!

Eventually it should be the opposite…

Select bigger planes, so the distance between the two aircraft before disappearing would “seem” closer than it would if you were to fly smaller aircraft.

…it seems that even with similar dimensions’ planes, distance for disappearing is anyway different with some of them…

I flew nose to tail on the A320 with a friend months ago. As long as the nose and tail don’t touch, neither of us will disappear.