So I’m just curious if anyone else is having this “issue”… I don’t necessarily think it’s a bug, but is definitely annoying. Let me give you flight as an example:

Last night I loaded up at Allegheny County (KAGC) in the Cessna 208, knowing that it was a large snowstorm outside.

Here was a screenshot of when I first loaded up: 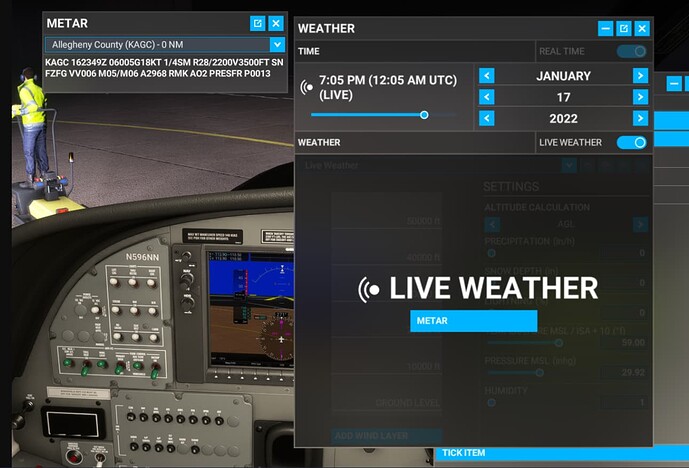 As you can see, the live weather is enabled, and METAR shows correct. If you look, though, there is no snow on the ground and it isn’t snowing. Also to note Temps on the aircraft showed incorrect (around 30C).

At first I thought it was a bug and was going to report it as such, but a little bit later (upon taxi to the runway) all of a sudden the weather changed, and now showed correct. Still not snowing, but the ground covered in it and the temps correct.

I took off and flew around Pittsburgh, eventually settling to land Runway 28L at KPIT. Visibility definitely poor. On approach to 28L and short final, all of a sudden I lost sight of the runway, and out of no where the snow just started falling hard. I don’t have any pics of those moments (sadly didn’t take any).

During all of the flight, I stayed fairly level at 3,000 feet.

Anyone else have similar issues with the weather loading in super slow?

Looks like you were flying during the daily recurring live weather outage, between 23:00-00:12z

I’m guessing it loaded in as you were as you were taxiing to the runway it must have past 00:12z?

Oh wow that’s it then! I started flying somewhere between 6:30 to 7PM eastern. So right at that timeframe.