Is it correct to say MSFS graphic quality is limited to what Xbox can do?

Why the constant down on what SX doe’s? We know PC’s are nearly infinity expandible, this harks bark to the whole ‘flavour’ aspect of this thread that i commented on earlier.

I’d love on my SX to plug in a new gpu or at a whim… add an enormous amount of memory.

Sounds to me that somebody resents a pleb with limited funds having the ordacity to enjoy a program as that person does… as a fraction of his hardware price.
Toxic.

But here’s a tip, it’s a good spot for the rolling cache.
At least it’s now not completely useless.

The rolling cache is only good for caching photogrammetry and will have nothing to do with VRAM, AFAIK.

If you move the rolling cache to the remaining, useless Vram, yes.

I think there is probably a high likely hood that next year we might see a new “Pro” version of the Xbox announced / released.

This is a Microsoft Exclusive title and I do imagine Microsoft would want this running well on their system.

We can only guess what the specs might be, I’d probably assume a minimum of 24gb of Ram and maybe 20 odd Tflops. They do love talking about Tflops… maybe a Cpu boost to 4.2ghz.

I mean this is all speculation, but i think those specs would greatly help both the Xbox and PC community alike as far as this Sim goes.

In answerr to the OPs question, the answer is “no”.

See this in particular, which makes it very clear:

And every dev Q&A since the xbox announcement makes this clear.

And the PC version has VR

It’s not even a discussion really

I don’t quite know what you mean by “cloud depiction” - perhaps you’re referring to the quality of clouds - but the Series X version looks beyond amazing IMO. Almost on par with high end PCs I would say…almost.

Clouds are resource hungry and even cause frame drops on PC depending on what kind of cloud formations you have in the sky and the amount of scenery being rendered around your plane - that is, unless you’re packing a bazooka of a setup like a 3090 coupled with a blazing fast CPU and lots of RAM.

For the most part, my game runs at a steady 30fps with stutters here and there. I think the day they resolve stutters completely everybody will be so much happier

There’s no pro system coming next year although there will be a hardware revision which means less power consumption, more efficient components and less heat generation. That’s about all you can expect.

We’ve barely seen any native true current gen games on the Series X - what makes you say they will release more powerful hardware? SX has more than enough juice but there’s plenty of room for optimizations. Plenty…

That probably represents a higher PC specification than the majority of PC users have so its simply false to say that the Xbox itself is soley resposible.

Asobo/Microsoft have a commitment to make this sim play on both console and on a range of PC hardware.

A PC user who is still rocking a 1080Ti or 2070 has a PC that will underperform relative to an Xbox Series X. This is even more true if they still have their games installed on a mechanical HDD.

So the real question is, ‘Are Asobo developing this sim to be compatible with as much hardware as possible, rather than focusing on only the highest end PC users?’.

The answer is obviously that is what they are doing, and it’s the correct decision.

I say it because it was year 3 with the Xbox One that the One X was announced and subsequently released within 12 months.

And yes there is no real current “Next Gen” content out yet, and the reason really for that is because the Series X despite being rather powerful still doesn’t have the horsepower to run “Next Gen” features like real time Ray Tracing in any meaningful Fps / Resolution etc.

So in reality even though this is almost year 3 of “Next Gen” all we’re getting is still the current generation of games with a slightly higher fidelity in 4k.

FS2020 to me is a next gen title, and on Xbox we definitely have a horsepower issue with the memory at the very least.

Indiafoxtecho have had lots of issues getting the F-35 to meet the memory requirements of the series X, and have now resorted to an entirely separate build for the Xbox. This in short is not sustainable, tedious and time consuming for a small third party team. and it will absolutely affect the type of content we see appearing on the marketplace if not addressed.

Microsoft need to do something without a doubt.
The console has sufficient power for FS2020 for now, just not the Memory.

Edit* lets not forget the Series S, that thing is going to be the real handbrake…

I feel for anyone who actually believes this to be true.
Quite ironic how many SX users here are dissatisfied with MSFS performance and are hoping for an even more powerful “pro” XBox console to drop if the Series X could simply outperform the cards mentioned above.

Amazing how many folks greatly underestimate the ironed out mature driver established 1080ti.

There are definitely issues with the Software that simply throwing money at your Pc won’t resolve.

Bugs in SU9 are causing some of that, and yes my i9 3090 setup is feeling that. I had to drop TLOD from 400 to 300 to get the same performance on the ground, at larger airports at least.

You’re a bit of a clown, plenty of I9, 3900ti people complaining about the same issues Xbox users are.

There are definitely issues with the Software that simply throwing money at your Pc won’t resolve.

Show me plenty of i9/3090ti people complaining about the same issues Xbox users are having…we’ll wait.

I love how PC gamers are so quick to blame Xbox for everything… I’ve been an PC simmer for 20 years and no matter what hardware you throw at your PC it will struggle to run FS2020 in exactly the same areas as the Xbox version does.

This is also another false generalization you can’t back up with any solid facts.

Clouds are resource hungry and even cause frame drops on PC depending on what kind of cloud formations you have in the sky and the amount of scenery being rendered around your plane - that is, unless you’re packing a bazooka of a setup like a 3090 coupled with a blazing fast CPU and lots of RAM.

This was the case w/ the 2070 Super I had, but since the 3080Ti went in no weather ever comes close to threatening Vsync to 30fps which is my preferred setting given this hardware. I’m CPU limited when not configured optimally, and that is addressed by dialing back Terrain-LOD as needed and by doing so can go in and out of any airport in any weather in any plane I use which includes the B78X, AS CRJ700, and at some point the PMDG 737-800.

For someone who’s been a PC simmer for 20 years, where do you come up with such broad generalizations?

I have an i9 and 3090 and you can check my post history to see I’ve had issues since SU9, specifically having to reduce my Terrain LOD to 150 and disable AI traffic to get back to the performance I had in SU8. Granted, I am flying in VR though.

This game has always been hard to run for myriad reasons.

Hmm…Just curious. Do you have multiplayer turned on? I haven’t used it in months, but when I consider why some have issues and some don’t, that’s one of the things that makes me wonder. For those with it, I’d imagine your rigs have to render your flight as well as the jets and spaceships flying at crazy speeds around you. Without that extra work, would things be smoother? I fly with it off and I use the Aerosoft live traffic mod instead. I’ve found my experience to be much better since the change and purchase.

No, never used multiplayer, too antisocial for that haha.

If it’s still daylight outside when I get to sim I will use live weather, but if I don’t get to fly until it’s dark I’ll use few clouds preset and set it for the afternoon.

I usually use AI traffic with high variety, although having to scale it back since SU9.

Clouds in live weather seem to be quite impactful.

My feeling is its due to the extra weather/prop simulations they added in SU9 putting more pressure on the main thread. They probably arent’ worried about it because they think the port to DirectX12 will resolve it, so it’s just a temporary frustration. At least, that’s what my glass half full perspective is.

Regarding you using Aerosoft Live traffic, I wonder if because that’s a third party add on, it uses a different core and so your not hitting the main thread so hard?

There’s a simmer that posts great vids on graphics settings for the sim. I followed his instructions to the letter and have my NVIDIA settings customized for MSFS like this. There’s something about the Clamp setting that helps with stutters. I’m still trying to understand it all. 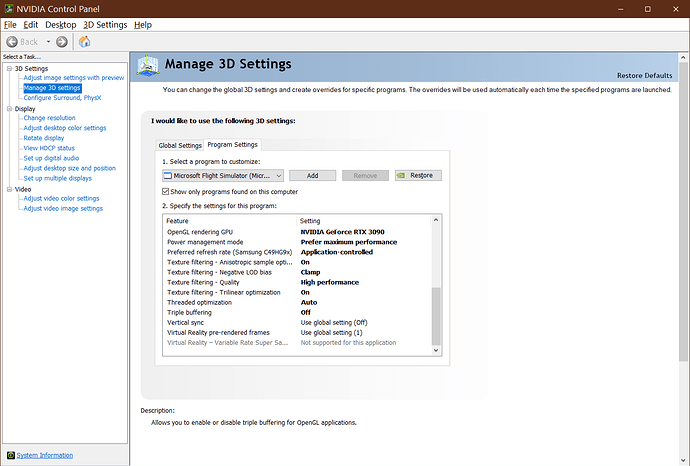 I have it on clamp as well, I think it does help in VR. Overall, I’ve been really happy with my performance the last few months, it’s just dipped relative to SU8 with SU9.

I would love to know from someobody knowledeable whether third party add ons like Aerosoft Live traffic help becuase they run on a different core, and that for those of us with more than 8 cores we can boost our performance by buying third party add ons to manage tasks that the main thread then doesn’t have to?

In that way, Aerosoft Live Traffic would be totally worth it to me, as I’d essentially be buying a cheap performance upgrade.

I have no idea if this is true however or just my simplistic understanding of how this might work.

It would be great if Mbucchia or Captain Lucky could comment.