Issues seem to be getting resolved?

I’ve opened several Zendesk items with MS/Asobo and to my surprise, some have been labeled as “Solved” already. I wonder if that means that the issue has been solved in the upcoming patch??? 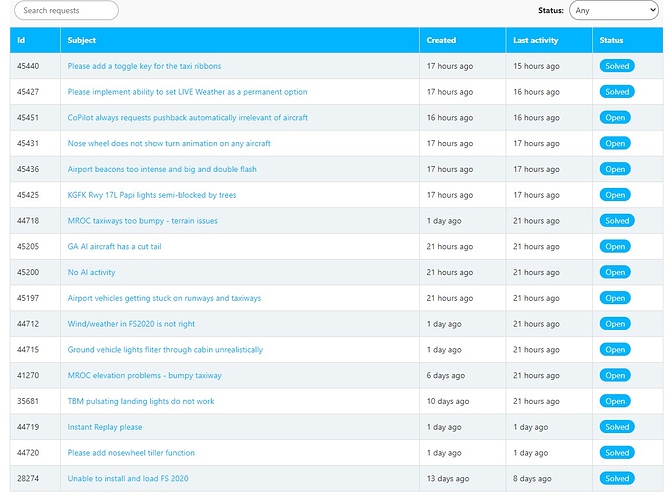 No that just means your ticket has been looked at.

Not even 2 weeks since release it’s going to take a little longer for them to fix all the issues. Let’s just report and give them time they need.

In the end, nothing related to the issue being solved …

Edit: Maybe I’m wrong about this

Ah ok thanks for the clarification! +1

Then click on your profile in the upper right, and look at your activity.

solved means they have fixed it

No, “Solved” in Zendesk means just this:

Our team has recorded the bug in our internal bug and issue tracker. Please note this does not mean you will see the bug fixed in the next update, but has been recorded and prioritized accordingly.

Exactly as I said…

If police forces around the world took the same approach every crime ever reported would be “solved”, wouldn’t that be marvelous!

Bizarre use of the english language!

Exactly as I said…

With the tiny difference that there may never be a fix for a “solved” bug if it’s sufficiently unimportant or hard to fix.

I doubt it. My ticket is also marked solved with a response that is nothing close to do with my actual request.