Just purchased! Thanks for the discount, guys! Looking forward to flying her in a bit.

Having flown it for a bit, I can say it is very well modeled vs a real life warrior (both in handling and flight characteristics, as well as interior and functional modeling)!

This one will mean a lot to many people

Exciting - dowloading it now! Can’t wait to see how it flies…

Bought it! Took it for a quick spin. I like it, just as I like the other just flight products. I have only one question/beef. Just like the other Pipers by just flight, it seems to require a lot less right rudder in climbs (full power, a little less than 10 degrees pitch up) than what I’m used to in the real aircraft. What do others think? Is p-factor fully modelled?

All sounds good! With regards to the priming - is this functional? I’ve never encountered an aircraft in MSFS other than the DC-6 that has trouble starting. All aircraft seem start first time, everytime no matter the OAT or oil temp etc. Even if they feature a primer I’ve never had to use it, even in cold weather. The same with turbo’d engines, no amount of full throttle flying will break anything even if manifold pressures are off the scale.

Just interested to see if this is just MSFS simplifying engines or if they can be something you need to look after. The DC-6 proves it is possible so maybe GA engines are just a lot more bulletproof than I imagined?

Looking forward to flying the Warrior and thanks for the discount! You guys know how to keep your customers happy!

Could someone kindly outline the GPS/AP functionality that comes with the Warrior?
ie, will it track the magenta line, (NAV), from a flight plan loaded in MSFS?
Also, can you set a VS or do you hand fly it to the cruising altitude you want then hit an ALT HOLD button?
Thanks
TG

Yes. Except in the the Warrior VS is set by using the trim wheel, and adjusting as required.

So far, I love it. Engine sounds are very good. Flight model seems about right, but haven’t spent a lot of time with it yet. This is the only plane I have for msfs that I actual flew irl, (got my ppl in a warrior, long time ago) so its quickly becoming my favorite in the sim, despite its slow speed.

Cant seem to get the stall warning sounds to come on. only for a split sec did I hear it. Anyone else have that issue?

The aircraft doesn´t start when I keep it on the “start” position by using the yoke control, I have to select “both” on the magnetos and then put the control on “start” by clicking and holding with the mouse.

I have that issue with my warrior and the Saitek switch box.

This occurs a lot with addon aircraft and external devices. it is because the external switch sends a pulse not a continuous signal.

It can be fixed by modifying the starter stats in engine.cfg, basically give it more torque and have it last longer. Find a setting that starts the engine without it turning on like a ceiling fan. You will get a slightly less realistic start but your external switch will work.

These parameters are the ones to play with:

A random quick flight in the new warrior: 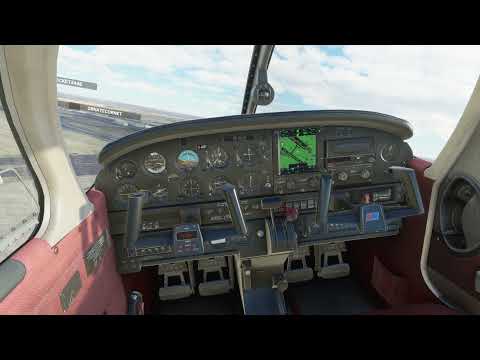 Will this be a good addon for practice? We have the Warrior III at our University.

Could someone kindly outline the GPS/AP functionality that comes with the Warrior?
ie, will it track the magenta line, (NAV), from a flight plan loaded in MSFS?

I have not played with the AP fitted to the warrior yet but generally Just Flight aircraft will track the magenta Line if your source is GPS subject to a few Provisos:

Will this be a good addon for practice? We have the Warrior III at our University.

Sounds like exactly what they said.Thanks for the headsup.

I would change that to — unsupervised flight sim time while training = Be aware of the pitfalls.

As a student, you’ll immediately notice the differences if you have any sense about you. I used FS95 while I was training, and it was obvious where there were differences, but it was still useful. Granted, I’ve been into aviation my whole life, and am a mechanical engineer and a hockey player, so I’m mechanically adept and athletically inclined to be aware of my surroundings, but, I don’t think I’m special.

I totally agree that your instructor should be aware of your skills, but, you’re just as likely to develop bad habits simming or not. I don’t think there’s anything special there either. He doesn’t need to be looking over your shoulder every time you sim. It would help to tell him you’re using the sim.

Hopefully you’re able to fly for real at least twice a week in training.

So, yes, this is useful for practicing in. Especially your preflight, flight planning, cross-country flying and learning your surroundings, what it’s like to approach an airport, setting up the plane for proper speeds in the various phases.

One thing that is most important. It is SUPER easy to skip steps in the sim. That is one thing you ABSOLUTELY have to avoid! If you’re going to practice in the sim, do EVERY… SINGLE… step you would do in the real flying. Also, all the tasks you have to do in a flight are “easier” in the sim. When I was getting back in to flying 6 months ago after a 20 year layoff, the most important thing I had to relearn was not getting “behind” the aircraft. Talking to ATC as you’re setting up each phase, integrating into a pattern full of aircraft and being asked, for instance, to extend a leg and things like that, so, you’re not only managing your speed and altitude and direction, but being aware of other planes in the pattern and listening to ATC. That’s not the easiest thing to duplicate in the sim.

So do every step of every checklist you have. At least learn that.

Just flew this aircraft TJVQ-TJSJ. Nothing short of amazing, as usual with these guys. REALLY enjoyed it from start to finish. Different enough from my Arrows to make it worth it! Highly recommended.

It does have a clickspot for ALT HOLD if you so desire.