Anyone else have issues when disengaging the autopilot that no matter where the trim wheel is set, the plane pitches over? It’s easy to plant the thing into the dirt if you do not respond quick enough.

Honeycomb Bravo mapped to Simhanger’s YT setup guide, never had any issue as described, if anything I’d it’s been excellent. SWS have a active Discord channel and are very responsive.

Yes, I do. Annoying.

I have read that you have to disengage the autopilot before you apply full flaps.

The Kodiak models the auto-trim flaps compensation of the real aircraft. If you deploy or retract flaps with auto-pilot off you see the trim wheel rotate to compensate automatically.

In our aircraft engaging flaps with autopilot enabled has no effect at the time, but later on turning off the autopilot causes the trim wheel to spin and pitch attitude to change, just like would happen if you had applied flaps.

I have no idea if this is realistic behaviour.

Perhaps that is part of your issue.

A fix for this issue was promised a long time ago, but the developer seems to have forgotten all about it.

It is not obvious whether the delayed nose down trim compensation that occurs after AP is turned off (when flaps were deployed with AP still engaged) is actually an “issue” or whether the real aircraft actually does that.

TBH it seems unlikely to be realistic behaviour to me, but you would need a real life Kodiak pilot to confirm one way or the other.

I’ve never flown a real plane with such characteristics and it would seem to me that there would be a massive death toll if it were in the design. The plane in the sim seems to be reverting back to the take-off trim setting. Double clicking the AP button resets it so this is a Asobo or developer problem. Finally, what other plane does this in the sim?

Did you contact SWS on their Discord channel? They are very responsive.

Here’s what Alex had to say about this when i asked about it a while ago back when the aircraft was first released:

" @ScarsStitches it seems that MSFS autopilot has a trim of his own. So when you turn off the AP, trim jumps back to what you had before you turned it on. This isn’t realistic and we and a couple other devs have reported it to Asobo -I don’t know if it has been fixed since.

If you want to check, when cruising set your aircraft trim for roll right and pitch down (example). Turn in the AP and let it level her. Then turn off and see If she stays level or goes down and right."

And when i asked about it again a couple months ago: 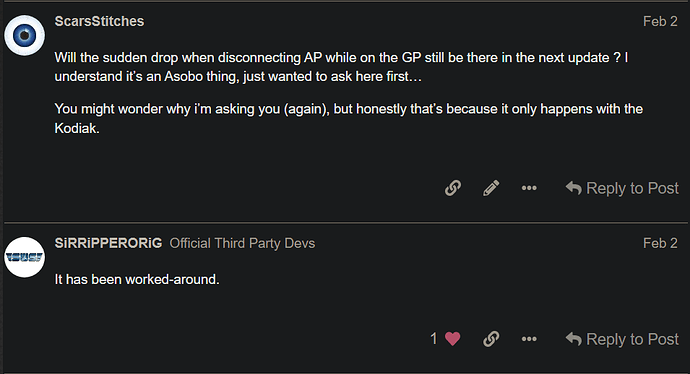 Been reported to the Kodiak people weeks ago, they are supposed to have a fix for it, but so far nothing,

“WORKED AROUND” to me sounds like a temporary fix is in place. In other words, no it’s not fixed but if you make these changes to your sim, it kinda works.

I have no idea why this significant bug isn’t fixed yet.

I gather it is a workaround because the bug is part of how the sim AP works which only Asobo can fix, so all the Kodiak devs can do is work around it.

No it’s not how the sim ap works, because no other plane shows this behavior. Can we please stop with the excuses and fix the problem?

This is a great plane however it is also business as usual. We all purchase something that is flawed in one way or another, not ready for release or at a lower standard than advertised.