This is good news: SimWorks Studios is working on a Quest Kodiak. See their FB.

Yay! Thought Lionheart would be on this but nothing happening with them.

Nothing against Lionheart, but SimWorks has the official license from Daher for this model, so THEIRS is one I am interested in more. They are also a bit more knowledgeable about MSFS aircraft development than Lionheart at this point (Lionheart is struggling on a couple of fronts in terms of differences for MSFS: avionics and gauges primarily)…

Lionhearted already have a plane released, I think, though I haven’t tried it. I heard it had performance issues. It’s the Trinidad I believe.

Trinidad was rough at launch, but Bill has been great about pushing out updates and it’s neck and neck with Carenado’s Mooney for me with Carenado ahead in polish, but the Trinidad having much more character.

I’m interested in picking this up from both SimWorks and Lionheart - if it’s anything like the Arrow situation with JustFlight and Carenado they’ll be something that appeals to you about each of them.

I’ll take that as a good recommendation so this will be my next Payware. Looking forward to it.

Yes, Bill is pretty good about updating and has improved the Trinidad a lot. He is STILL working on updating old gauges though… And I could do without religious propaganda shoved into every user manual.

You guys are serious??

they really did that?

Yeah. They are known for that. Every manual has a dedicated page about how everything is because of JC and how you should repent and all that stuff. Full page heavy-handed Bible thump. Mandatory. It’s the biggest cringe factor about Lionheart aircraft.

John Cleese would be flattered.

Yup. Here’s the full caboodle for anyone interested. A real bible-thump indeed. 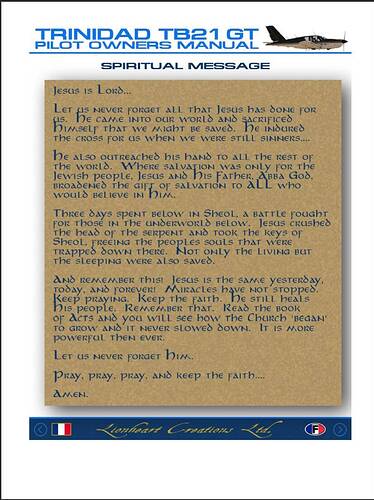 Wow. I don’t remember that in the original Lionheart Kodiak from FSX…

Yeah, I was looking for that. If anyone wants to discourage atheists like myself, it’s a good way to do it. Now, that being said, this is getting off-topic.