@pccoder , something happened with this thread, i think someone may have gotten banned and their posts removed, hence my reply to seemingly nothing, lol.
the mod is called Uwa light mod pack and can be downloaded from the following link:

Lighting fixes/updates for all Turboprops Turboprops

Hey everyone, Some may have seen me post about it in various threads, but - I have now completed lighting fixes for all Turboprops - TBM, KingAir, and C208. You can see the landing lights from the cockpit, strobes reflect inside clouds, etc. All changes are exclusive to each airplane, so no global files get overwritten. See the readme files for details. Hope you like it!

Thanks so much. Looks like that will work fine. Thanks again.

It’s next to impossible to taxi during night thanks to poor lights. They are duller than pocket flashlights, and the reason why I avoid night flights.

To illustrate the severity of this problem, here’s a picture with a CJ4 and tow tug, and you would think that the CJ4 would outshine the little tugger, but apparently not.

I know there’s a community fix for this (haven’t tried it yet, but I will), but this shouldn’t be that difficult for Asobo to fix in the next update.

The lights aren’t really lights, more like brightened textures. The only ones throwing light are the street bulbs and the caddy.

I distinctly remember taxiing at an airport in X-Plane, at night, in the Thranda Kodiak (which I hope one day will make its way to this sim!), and had parked up to clean up the aircraft. I noticed in the distance, maybe a 100 or more metres away, a large building that was illuminated while the others were not.

I then realised I had left both my taxi as well as landing lights on. I turned them off, and everything ahead went dark. The lights on the Kodiak are like searchlights! The kind of thing you might want on approach. I also remember coming in to land on runway 30 at Hoskins in PNG, low over the trees, and they comfortably light up everything below for quite some distance.

You just don’t get that in this sim, so I will certainly look at that mod, and see what it offers.

Thanks, this mod seems a bit easier to install than the ones I found earlier.

I made a change to the default LIGHT_ASOBO_Landing and LIGHT_ASOBO_Taxi, but they have a bug in their processing system that screws up the importing of certain light factors for volumetrics…the values can be 0.000001 to 1, yet it’s interpreted as either 0 or 1, yet its the most important of 2 numbers to get right for a balanced effect…I can load the dev mode and change the values in the game, but the lights get reset back to the wrong interpretations at key events, so I gave up on it. I filed a zendesk report to fix the processing of the legacy .fx files, yet since they’re implementing a new system that has yet to see the light of day functionally, it’s a rock and hard place for now…i just have the larger splashes without volumetrics for now…

Hi,
sorry that I wonder about the external lights of the FS 2020 aircraft. It seems that this is a problem with all types (props, turboprops, jets and airliners):
If you look to a real aircraft the lights (Navs, beacons, strobes, taxilights and landing lights) are much brighter than used in FS 2020. I really miss the bright “shining” of the lights. They should be seen in a longer distance to the aircraft - but they don’t. Do you agree that a light should be much better shown as a simple white or colored dot?
In addition: all the “rotary beacons” on aircraft or on vehicles are none! They don’t rotate as a dark candle but have a bright reflection on surfaces nearby. I think they should really rotate and the brightest point should be the bulb and not the reflections.
It would be a great idea to make a correction in the next updates.

Asobo, can we please fix the taxi lights already? Topic upvoted and brought back from the dead.

My 1978 Corolla has better headlights than the landing and taxi lights in all FS2020 aircraft. I can’t see anything when taxiing unless it’s 3 feet in front of me. It’s ridiculous. The mod mentioned above seems to have some side effects.

Real life King Air. The one on the right has a lighting upgrade but the stock one has already massively better lights than what we get: 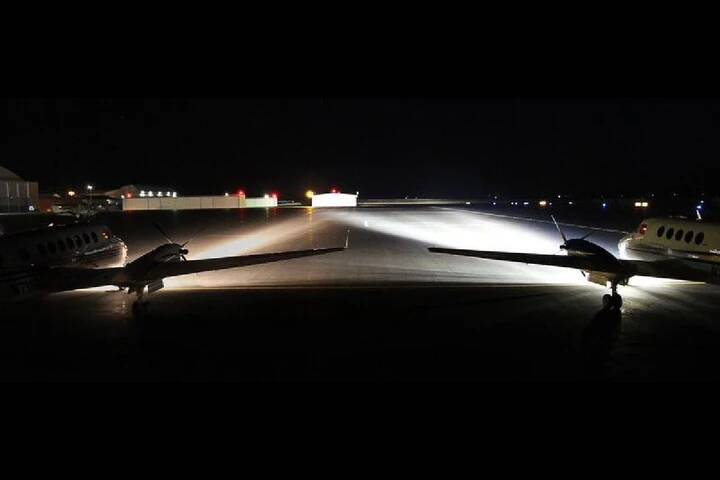 I understand there are fixes for these terribly useless landing and taxi lights, but how about ASOBO directly addressing this?

Is there a fix for all default aircraft? If so, how?

Lights in the Beech Baron or any of the premium aircraft. We paid extra for these and can’t taxi them at night or see the runway when landing at night. It’s been 9 months. If I had bought them from the Marketplace I’d be trying to get my money back. “Come On Man!”
We could also add “Weight and Balance”

Fast forward to August 2021, and I’m also having issues with landing lights not showing up or not being nearly bright enough to be of any use, especially from the cockpit view. In external view they’re there but also very dim. Please fix Asobo!! It’s been a year!!

completely in the dark trying to taxi with the Cirrus SR22 with landing lights on.
very dark. not safe.

Taxi, landing and airport lighting is too dim on all planes for me. Looks like I’m not the only one with these problems.

The unlocked planes can at least be modded. The excellent C208-mod, for example.

I have to agree this one has been over look for far to long.
Why spend so much time on updating a world that is xxxx times better the FSX.
Please spend more time on fixing the bugs and other problems that are still in the Sim.

Taxiing/landing anything without synthetic vision at night is just confusing when you can barely see what’s right in front of you. Too often I find myself accidentally off-roading…

After flying the FA-18 at night and seeing the pitiful landing light I had to make a post. Please Asobo can you PLEASE brighten the landing/taxi lights on the default aircraft? I’m on Xbox so don’t bother telling me to download a lighting mod.

I enjoy flying at night but I don’t enjoy it when the lights don’t even illuminate the ground past the aircraft nose.