Agree with you completely, scenery is excellent. I’m playing Microsoft Flight Simulator, not Microsoft Walking Around On The Ground Simulator.

Helicopters don’t. And on city/street level scenery I can agree with you, however the tree issues start well beyond that distance ! In above rainforest picture, the prominent pixelated treetop spoiling my screenshot was about 200-300 feet away. With trees, the issues also show when you are on 2500 Feet and look around. You will see some type of circular boundary, beyond that boundary there are no trees, because of the tree distance issue. They keep the short distance in, for performance reasons. With the 27-Juli update it will be solved, it was promised.

Photogrammetry is a different story. In this case making compromises is not avoidable. I’s just fly(high)over scenery. Things like tree trunk blocks could be probably cured with Ai geometry flattening.

It’s weird that they let you taxi and park in Flight Simulator as the name suggests you only do flying. Because then the quality of the graphics while taxiing and parking might actually matter. And it’s totally bizarre that people might actually like to take a look around and appreciate the places they’ve flown to. Well, good thing they didn’t market this as a bush flying game where you could land off field and on airstrips close to trees.

You want realistic vegetation? You can not do better than this: https://secure.simmarket.com/-habashi-4-season-pack_free-lod-for-msfs.phtml#reviews For those dissing those of us who fly low and see the World, MSFS 2020 is a Total World , not just for flying at 30,000 feet flipping switches for 7 hours and spending a few minutes a day landing and taking off. MS clearly has much more in mind to use this as a base for any kind of “game” they want. Want a FPS? Just add guys and guns. Want a role player? Add a few guys/gals and a scenario or 2 that look like (in the program) a Bush Flight. Lots more, too. If this were “just” a way to learn how to fly some random plane you choose, why are there no “study level” planes? Don’t get me wrong, I love flying, but rarely higher than 1k Ft. and flying the Mach Loop in Wales at 320 ft. is a blast.

I think vegetations in MSFS are smartly designed to look 3D but only consume as much as 2D trees. Otherwise there’s no way they could effectively render thousands of trees without heavily impacting the performance

Well let’s hope that is the case. Actually I think it won’t be that easy to solve the leaf shape. @MegaRiceBall734 may be right, that trees are actually 2D texture-like objects. I did several SDK experiments lately with a cactus shape (3D mesh) I found online. A solid mesh, low-poly, no separate needles, but still a mesh. If I put 500 of these in a field, my frame rate went down 30-50%. Trees at mid-distance cannot be 3D-meshes, they have to trick them, probably that happens in a GPU shader. If you get nearer, you see pixels. That pixelation can be solved, as well as pixelation for tree shadows in water.

The LODs can be a mix of 2D and 3D. 2D when further away, and then it only loads the mesh in once you’re super close. Not saying making great looking trees is trivial, but the fix for this is straightforward.

Y’all complain about any darn thing

The LODs can be a mix of 2D and 3D. 2D when further away, and then it only loads the mesh in once you’re super close. Not saying making great looking trees is trivial, but the fix for this is straightforward

In principle yes ! Challenge is: how would that transition be blended… you change the object while you approach it ? how to avoid jumps on short distance… remember the Nordic mountain tops, popping out. You don’t want to see flickering changes… When you want to avoid flickering issues, you could change only the trees at the forest boundaries… and perform the transition from 2d to 3d on quite large distance…

You could just fade in the transitions. Probably lots of ways to do it.

When my idea about the current trees is right, they are generated in the GPU… then the GPU should be able to take that as a “skeleton” and wrap some real 3d geometry around it, on approach. But I don’t know if that change can be done gradually.

Sure it can, the highest resolution LOD is loaded in, but not displayed. Then they use a transitional method, like a fade-in to slowly make it visible. Most of this can be done on the GPU with a shader so you wouldn’t have to further tax the already busy CPU and main thread.

I don’t think there are any serious technical limitations with making the trees nicer. It’s just work Asobo doesn’t have time to get around to.

Yes, when all this XBox noise is over… and Asobo/MS have proper time for a good DX-12_1 version, chance is all these issues will disappear. (or… FpS choices need not be made !)

With DX-12_1, you’ll be able to use bundles for trees. Suppose you’d load 70 different trees into the GPU and “beam them into the scenery” using bundles. Looking at the forest, you’ll see all different trees, but actually there are 70 different ones. With bundles (preset command lists) it may be possible to render actual 3d trees… and all issues with the current stylized trees will disappear, and tree shadows go solid…

3d trees smoothly blended in: This is what Outerra does. Outerra is a world simulator with procedural ground detail, in the works for years but still alpha. In the free demo you can fly a Cessna. Outerra.com. I followed the project since 2013.

sorry but no building is detailed.

There’s a large disparity in the detail and resolution between vegetation and buildings. 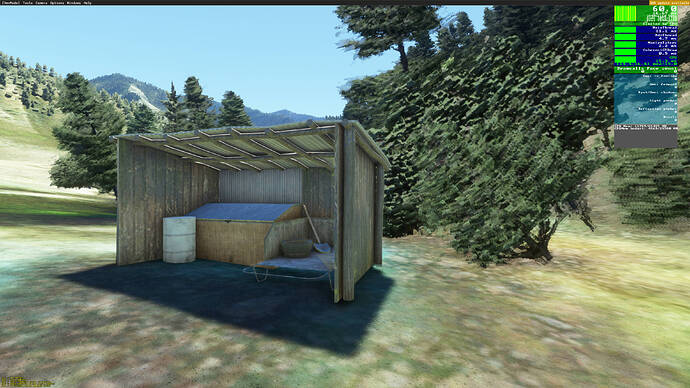 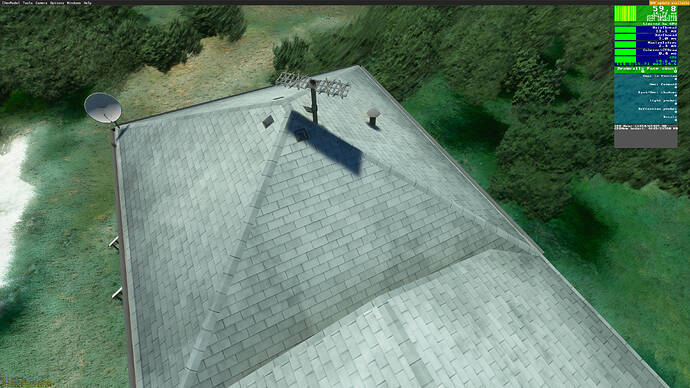 I think the trees are passable and this shouldn’t be super high on the priority list, but there’s definitely room for improvement here.

For example, the wind simply rotates the trees about their center (rather than bending them or skewing them at the base). In a strong wind it looks unnatural, and can actually cause the trunk of the tree to rotate out of the ground.

This topic should be revisited by Asobo at some point if one of the goals of the game is creating an immersive environment around the airplane when on the ground.

The switch to that level of detail would be really obvious every time it happens because you are so close.

The trees in MSFS are actually really well done. A really nice balancing act. Anybody who ever spent time in real time rendering knows this. Even with dithered LODs you would notice the switch to a full 3D model. And using full 3D models earlier when not on ground would gripple the framerate to no end.

Chapeau to the tree solution that they came up with. Perfectly done.

The transitions are already quite noticeable. The trees fade in and out constantly between angles and distances. They pop in the distance.

They certainly could make high performance trees that look better. Many other titles have even in open world environments at long distances. It’s just a matter available time and effort, not technical limitations.