Hey, i cant find the Leaning for Climb or Cruise for the Piper Seneca V.

I dont understand this performance table…It Says Mixture Full Rich, but i never get that High when i dont lean the Engine (Get the Mixture back) 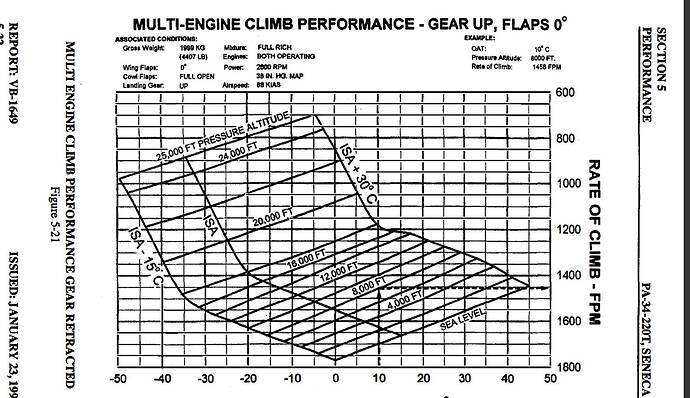 The Seneca V is a turbo charged aircraft. The turbo chargers help to maintain MAP. Piper recommends for best performance, anything over fast cruise setting (30" @ 2500 RPM) requires FULL RICH mixture. I am not sure how well the Seneca is modelled in that regard and I would guess it is modelling a normally aspirated engine that would require leaning.

The POH recommends you lean based on peak TIT. Keep in mind that the max TIT is 1650. Again the POH will allow temps above 1650 (max 1700) for a max of 60 sec for the purpose of determining peak. (This should be used judiciously as the failure temperature of the blades in the turbo is 1650.)

thanks, but i still dont understand , i cant go full rich when i fly higher cause then the engine will eventually cut off.

I am not sure how well the Seneca is modelled in that regard and I would guess it is modelling a normally aspirated engine that would require leaning.

Apparently you did not actually read my post. You just skimmed it.

This would not be the only aircraft in a simulator that does not have all it’s systems properly modelled. If you are finding a significant loss of power as altitude increases, then obviously the designer of your Seneca failed to implement the turbochargers. So go to paragraph two in my first post where I provided the proper leaning procedure.

My Question is not depending on this plane. Other performance Charts from other Aircraft tell my the same. I have a problem understanding this Charts. And it begins with Mixture Full Rich. Nothing to do with MFSF 2020 at all.

i cant do Mixture Full rich when i fly high all the time. i have to lean to gain altitude, cause the Air density gets lower and i must adjust the fuel.

So why does the chart tell me to lean the mixture full rich.

So why does the chart tell me to lean the mixture full rich.

Because you are using real world charts and flying in a simulator that is not modelling turbochargers.

You can use a real world POH on a real world airplane. You can TRY to use with a simulated airplane but unless you paid $150+ for that airplane, (that’s airplane not sim), then you will likely find yourself confused more often than not.

Lean for best power and use the POH as a guide.

So you tell me in a real Airplane i can jump in this Seneca V. Start, Go to FL200 with Mixture Full and no Problem?

Pilot Operating Handbook. That is where the graph comes from.

Generally speaking, the manufacturer usually has a pretty good handle on the best way to operate an aircraft. If they say go rich, I go rich.

The turbocharged Baron, which also has Continental engines, is the same way. Full rich until you level off up at altitude.

As you climb above the turbochargers “critical altitude” (around 18,000’) the fuel control unit will meter the fuel flow down as necessary - even with the mixture still at full rich. But the normally aspirated / non turbocharged Baron you lean it as you climb. The G1000 makes it super easy, as you just match the fuel flow to the cyan markers.

Nice, thanks@all. Now i know that the Carenado Piper Seneca V is indeed very wrong in the SIM.

The GA Aircraft i Fly in the Sim always needed Leaning to Climb. Baron, Cessna for example.

I Check out the Forum about this mistake.

The wrong mixture simulation is already there since (at least) FSX and it affects all piston engined aircraft.

Yea, well its not a sim its an xbox game i guess.

No. It’s not an xbox game. Asobo apparently simply used quite a few items from FSX.

I doubt Asobo will address it until they add a default turbocharged piston, but it couldn’t hurt to vote on this bug report: Inaccurate Mixture Behavior on Turbocharged Piston Engines

Tacking on to this, @EvgeniyFurtim, in the thread he linked, there is actually a little mod that the OP made that solves the mixture problem if you have a hardware mixture lever. He’s made a version for the Turbo Arrow, Seneca V, and Rob Young’s Turbo Bonanza mod. It works fantastic and totally fixed the turbocharged experience for me. It may not work that well if you don’t have a hardware mixture axis though because automatically moves the virtual mixture levers in game.