Can anybody that has the LVFR payware airports of LEMD and LEBL confirm if everything is working and looks good with new WU?

Don’t want to buy it if it doesn’t work with latest WU.

I don’t know if this helps but I purchased MK Studios’ LPPT and LPPR right after the update and working well.

You can purchase one and see if it works, worst case it doesn’t but they’ll update it soon.

There is a note in their forums that everything works correctly. I have LEBL and I noticed that there are two W Barcelona hotels merged together, but did not notice any other issues.

I have several Payware airports that reside within the WU-8 area and all of them are working flawlessly. I have both of LVFR’s Madrid airports and I am not experiencing any abnormal aberrations. So…

LEBL has some double POIs, and also runway numbers have to be updated fron 07/25 to 06/24… Current AIRAC has the new data, but the airport not so you can only use runway 02/20 right now. Same goes for the default airport btw.

I have LEBL and it looked fine last night in WU8. if there were some double POIs I missed them, (too busy looking at the great photogrammetry in the City), the airport is excellent other than the previously mentioned change to the runway numbers and AIRAC that haven’t been updated. Maybe they will be at some stage. Beautiful airport though. I don’t have LEMD as there was a LEMD in the Premium version of FS already.

Are all ILS designations in the world map (route planning) correct for you (LEBL from LVFR)? only the rw 2 is displayed correctly for me. all others are just ils-z, ilst-y etc. without rw.

It’s stated in the LVFR forums that they will update LEBL within the next weeks and change the runway indications and remove double POI’s.
Until then you can still use it with WU8, but have to enter STAR/SID/Approach manually.

oh man and again a workaround … thanks for the information.

I have been searching this statement from LVFR across their forums and I could not find it…
Where it is?
Thanks,

For the duplicate POIs we can wait but not for the missing SID/STARS. Any workaround to tweak airport metadata?

Not anywhere close to my PC right now…I also have the payware A Coruna.
Is there a new entry in content manager for the MS/Asobo A Coruna, so is it easy to delete?
Or is it necessary to edit some files in the sim? (I would hate that)

No, very easy, i have learnt it Yesterday, just read
the last LECO post in the forum and you will have the answer how to do it

Hello everybody. My LECO Addon airport that was great is ruined with the new updates… I have Noticed more ctds since previous SU and now Addon is broken… I am quite disapointing to throw my money away like this at each update… I have writen to the Addon editor to inform them Does anyone know this same issue ?

Just be reminded that not every default MS/Asobo can be deleted: on XBox I could delete the default A Coruna but unfortunately not for example the default EDDS (Stuttgart) airport.

You should delete content.xml and restart the sim (if you own the pc version). I noticed that after world update 8 (after every world update as a matter of fact), new entries are written after your community addons. For instance LECO entry is after your payware version. After restarting, the sim will rebuild content.xml in the correct order. If you want to disable default LECO open content.xml with notepad and change this:
Package name=“microsoft-airport-leco-a-coruna” active=“true”
to this:
Package name=“microsoft-airport-leco-a-coruna” active=“false”
and save.

content.xml can be found here:

Hello,
Moved to Third Party Addon Discussion. Anything from third-parties should be discussed here.

LatinVFR CEO says this one in support forums: 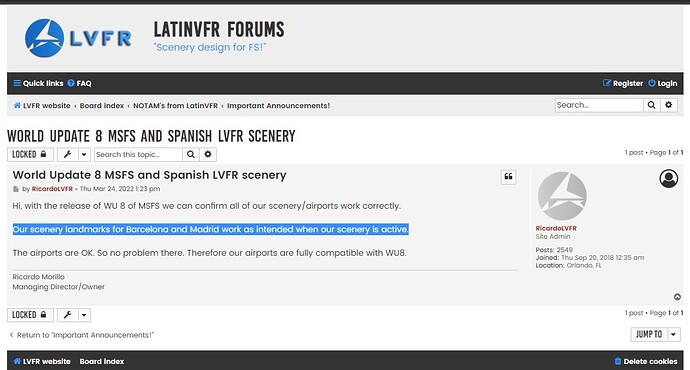 But that is TOTALLY far from what is happening with the WU8 update.

By themselves, additional Latin VFR POIs of this airport/scenario (MAdrid LEMD Barajas) are of very poor quality. Ridiculous PBR textures that do not resemble reality and destroy the photogrammetry and the real image of the buildings. An example is the Torre Cepsa Cepsa and the Tower of the Ministry of Economy and Hacienda. 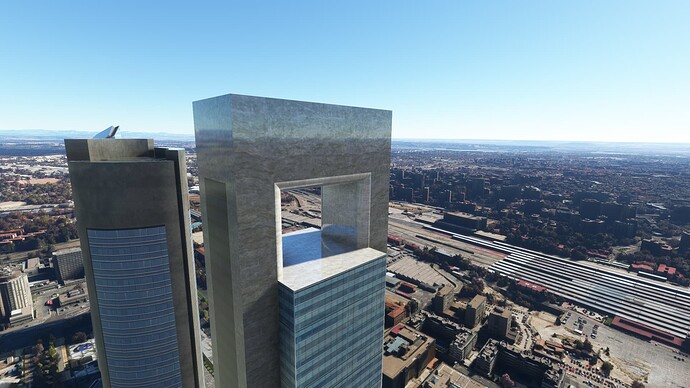 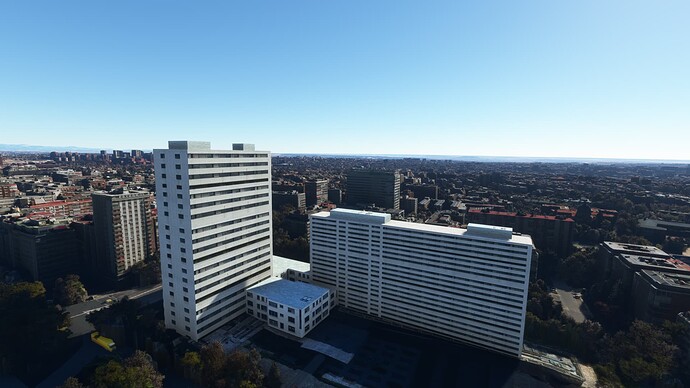 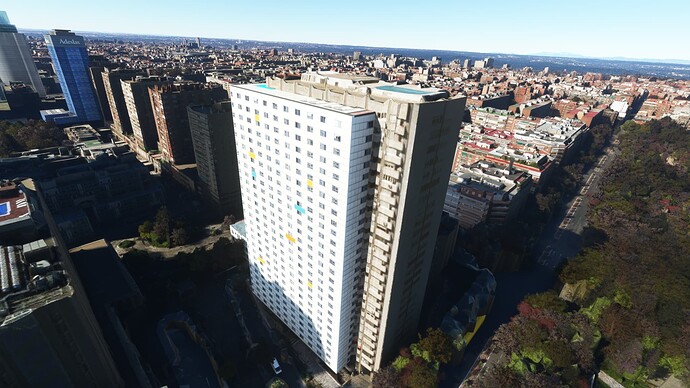 Torre Picasso aspect is a JOKE. 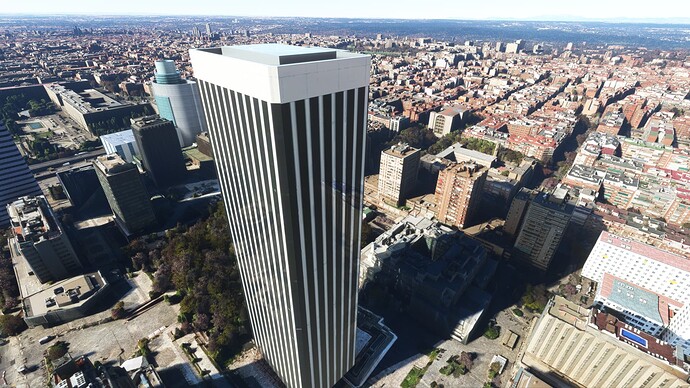 But now, this is also happening: Asobo’s Santiago Bernabéu looks like a kangaroo that has the LVFR POI in its bag. 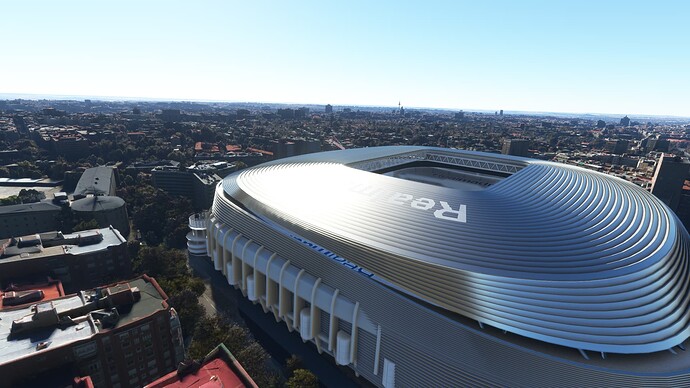 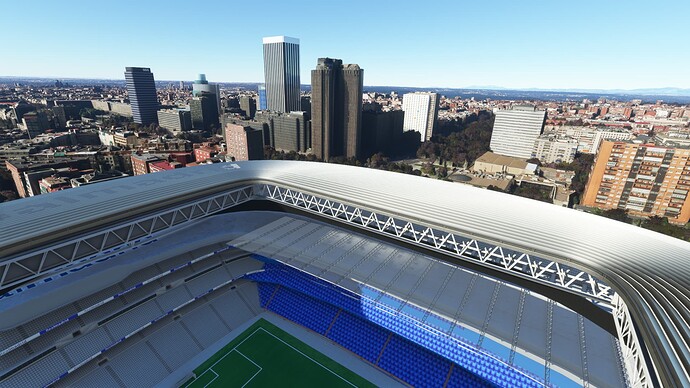 Torre Picasso looks like a transparent ballistic missile taking off. 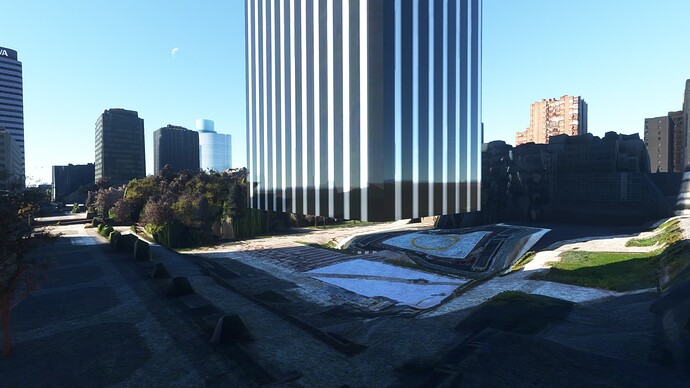 The BBVA Tower looks like the Hotel Mapfre in Barcelona. If JFrancisco Javier Saiz de Oiza (Architech) were alive, surely he would go to XPlane so as not to see his building humiliated by him. 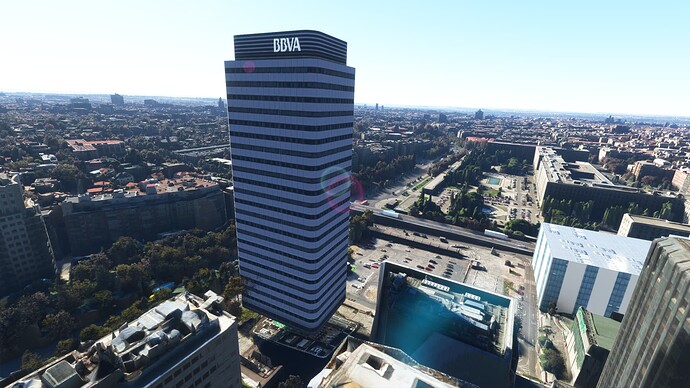 And the Retirement Monument, which Asobo/Gaya have worked on down to the smallest detail, appears like this at the moment: 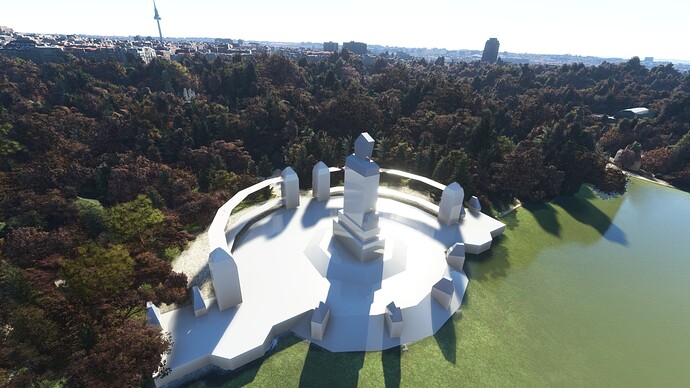 Please Ricardo: Simply DEACTIVATE forever additional POIS of the Madrid-Barajas Airport. We don’t ask you for additional work, just that you do not make it impossible to fly VFR (with open eyes) over Madrid with your airport activated, which on the other hand is highly recommended and greatly improves the Asobo Airport made by hand.

Is it possible to report those glitches on LVFR forum as well? According to Ricardo LEMD should work fine but it’s not true.

Latin POIs have very poor quality. Could it be that LatinVFR has made a direct port of the POIs from another simulator like Prepar3D? 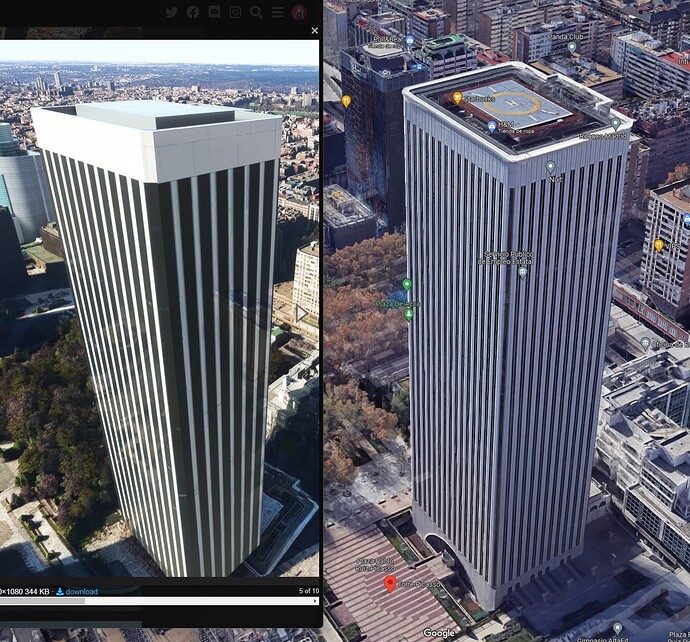