I am not your buddy. That is exactly what I was talking about, planes injected by VATSIM.
I agree the bug should be prioritized, yet, while in IFR you will be spaced by a controller or in UNICOM, it is not by any means a gamebreaking issue that would stop you from flying in VATSIM as you state in the very title of the topic.

Of course, if you choose to not use it, you have the right to do so, but having no lights in sight is usual in case of approaches in low or 0 visibility, in IFR it should not pose a problem, only in night VFR should it become a real issue.

Unless things have changed since I last looked, flying VFR at night is legal in the USA with a night rating.

You don’t even need a night rating in the US, there’s no such thing.

You are right. I had forgotten how lax the night requirements are. The one mandate in the US is that all private pilot students must have night training before they can get their license. In that sense the private pilot license is its own VFR night rating.

Here is an interesting article on the subject.

ModelMatchingMagic on flightsim.to is pretty nifty. However personally I do not like having tonnes of liveries installed so I just gave up on it for now and just use the default.

I see. So we avoid the issue and act like it doesn’t exist.

I see you’re just interested in arguing. Have at it. But not with me. Bye.

Download a little mod to fix the lights ? No, I will wait until most of the errors are fixed in the core sim program. Maybe that is why I never have any CTD’s…I have NO (Zero) Addons.

Relax friend. It was a simple reply and you read into that too much. I’m only trying to say, the problem doesn’t go away because you ignore it, or in this case tell ATC, negative. It’s a bug, and needs to be fixed.

OP - this is a known bug and please vote on the thread (hundreds of other votes are already on it).

Please use this thread to vote on this already reported bug.

I didn’t say to ignore the problem and I didn’t deny there is a bug. I’m a real world pilot. Other aircraft are extremely difficult to see even if you know where to look. When ATC calls out traffic to you in a busy terminal environment, you have two choices:

“N1234B has the traffic in sight.” In which case YOU are responsible for traffic avoidance even if you’re on an IFR flight plan. You have relieved ATC of the responsibility of traffic separation.

Or, you take a quick look and say, “Negative contact,” in which case, provided that you are either on an IFR flight plan or in a terminal area, ATC will continue to keep an eye on that traffic for you.

So far from ignoring the problem, what I’m saying is that “negative contact” is arguably the proper response.

I understand the bug exists. You can either let it ruin your day or just use a real world technique to work your way around it for the time being. Your call.

One small issue with that (when working at all) is that ATC cannot redirect Live AI so you will have unrealistic incursions as Live AI are notoriously bad at right of way and IFR spacing.

This is what VFR at night looks like on PilotEdge as well. See if you can spot the heavy that just flew right by me. Scared me, I wasn’t on flight following, and I suppose nordo drones aren’t actively vectored around VFR aircraft… I was just contacting SOCAL approach when this happened. CRAZY! There are lights on aircraft for a reason!

Also, it’d be nice if the airports had better lighting… landing at some of these fields at night is spooky because you taxi to the ramp and it’s completely pitch black and then you turn and there is a linesman standing RIGHT THERE in the dark! lol. 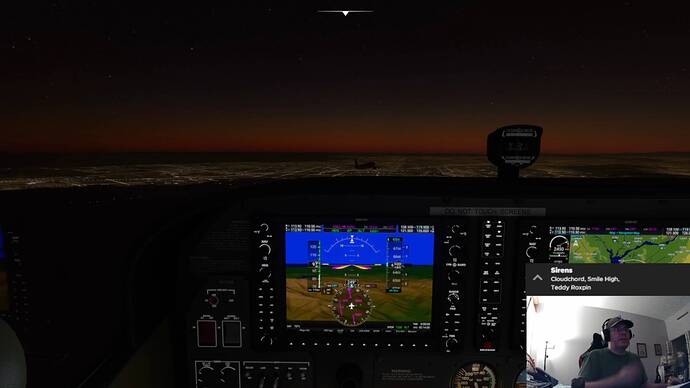 Maybe this mod could help at some places.

✓ Airports Lights is a Microsoft Flight Simulator 2020 mod created by Andres3D. Download for free to enhance your experience in MSFS 2020.

Yes but if conditions at an airfield are VFR, a controller may assign a visual approach procedure and ask if you have traffic in sight, and (assuming you confirm them in sight) ask you to follow them. Of course, without working strobes at night, this is impossible, and the best you can do is say that you don’t have the traffic, which is a real shame when traffic is right off your nose at 4 miles in perfect VMC.