I am having an issue with stuttering and very low FPS in bigger cities. The GPU (RTX2060) seems to be doing just fine and not really working that hard. My CPU on the other hand is a different story. I have a decent one i5 9600K. I am running what MSFS defaulted me to for graphics which is High End. Ive turned on the FPS monitor in developer and what im getting is less than 15FPS with “Limited by MainThread” Anyone have ideas?

Can you post a screenshot of the entire output, the breakdown of time spent is potentially helpful.

One thing will always be a limit, that doesn’t mean you have stutters or bad fps by default.

If you spend a large amount of time per frame on something else it might not be just the main thread at fault.

From what limited understanding I have right now, it’s possible other threads need to execute work but ultimately return results back to main thread which can increase the time where main just hangs.

So one this is for sure, I definately have low FPS and stutters

Definitely the main thread and no indication I can glance on what’s causing it.

“Limited by MainThread” seems to be a common problem. There are many posts on reddit.com regarding this issue (e.g. https://www.reddit.com/r/flightsim/comments/ibopdw/fps_issues_caused_by_mainthread/ ).

So the question is how to unlimit the hardware…

…btw: my dev mode panel looks exactly the same as Jokerslover’s does.

I am yes. I was actually thinking that. Could the HDD be too slow

Yes, in my experience the HDD was the cause of “Limited by MainThread”. I used to install on the hdd and then moved to the SSD but it was still using HDD sources viewing the task manager. I uninstalled and reinstalled on the SSD and now it goes much better and no longer uses the HDD.

Yea, compared to my rig, the rrdthread is very slow. So that makes sense esp given the amount of memory you have. You can try reducing texture resolution to keep the read rate down, but really get an ssd

Well im going to have to buy a new ssd. The one I have wont be big enough

I have the exact same issue but the game is installed on the SSD?

Are u using the rolling cache? Is that one on an hdd?

Are you using a SATA SSD ?

Same issue might not always be same cause sadly… It could be other factors contributing to stutter. Can you also post a screenshot of the dev FPS panel when you experience this?

I can do better than that… 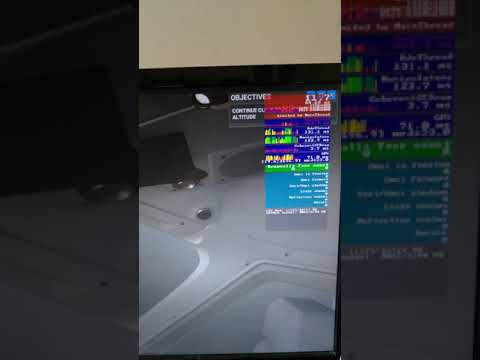 Game and rolling cache are installed on a NVME SSD on my PC.

Previously, when I had the weird “hybrid” situation (the sim moved to the SSD but still using the HDD resources) I had about 5-7 fps.
When I did a clean reinstall on the SSD I experience about 25-30 fps. Full live (with no cache I think?)
I think the SSD is not limiting the FPS, now shows “Limited by GPU” and usage of SSS is no more than 10%

Wow that’s impressive. See how the rdrthread just spikes like crazy?
You could check in task.manager under performance and see if your ssd usage is also spiking which might be related.

I also noticed that with AI photogrammetry it’s takes a while to populate that cache and get a lot of stuttering for a while before it calms down.

Worth trying to disable rolling cache. It could be the read demand exceeds the SATA bandwidth 6gbits esp if you have more drives on the same bus and they are used at the same time.

I’m surprised this is so bad tho…

Okay, here’s a graphic from AMD showin’ the different workload of DX11 and DX12 on an 8-Core CPU. So I think the API is our basic problem. 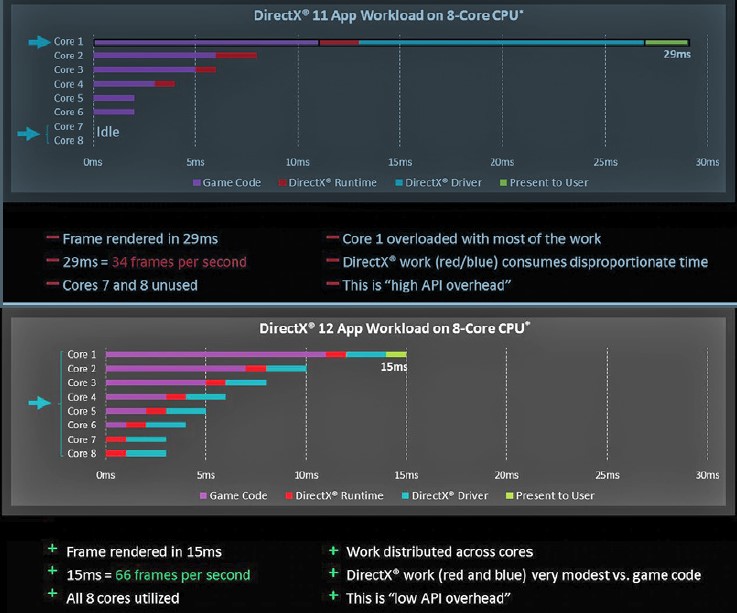 Before SU5 I was always limited by GPU (Dev Mode FPS counter presents the same) as it’s quite normal that my RTX 3070 is not enough for 4K@100.

After the update with the exact same settings and config I’m still limited by %100 GPU usage by the values but Dev Mode FPS counter shows “Limited by Mainthread PC”.

It looks a bit weird to me. Anyone experiences the same ?

By the way I didn’t get any noticable gain with SU5. Is thant normal ? I see lots of people are sharing their doubled FPS’s ?!