The live weather is not pulling through current data.

The world map now for some days is showing outdated cloud cover, of around 48+ hours old. This also seems to be impacting the upper winds which are also incorrect these past few days, again by more than 48 hours + old.

This issue is happening in both stable and beta builds.

Below is a comparison from this morning, as you can see the cloud cover is not correct and is some days old compared to current:

And here is a current comparison:

As you can see the cloud cover is not correct. Winds aloft this past few days have also been way off, often differing in both direction and speed, by as much as 60+ knots difference to what they should have been.

MSFS does not have the ability to display historical weather, so I doubt that is what you are seeing.
Other than the pic, what are the actual reported conditions?

I’m not saying it’s showing historical weather by design, but by a bug in the data.

It looks very much similar to the data bug it had last year, also where the world map showed incorrect cloud coverage due to a data issue.

You can see from the pictures of the world map, that the cloud overlay is not current.

Yes, I get that, were you a recent participant in a multi player session?

No I don’t use multiplayer.

I’ve had several other people confirm they have the same issue (both beta and stable build), so it’s not just impacting me. It’s been happening now for about a week. Some days it does refresh eventually to current weather, other days it seems stuck on old data.

We noticed it with the winds aloft also - did the same route as one a couple of days ago and the upper winds were from 48 hours ago.

Mines the same on Xbox. Never correct even after a restart of the sim

so I doubt that is what you are seeing.

If there’s someone on planet earth I won’t doubt one second when it comes to timing issues with Live weather in MSFS, it’s @utd4life12 (you might want to look up his activities and get an impression of his expertise).

Nevertheless I checked just now*, and no surprise: the world map showed old weather, so I VOTED!

*Due to the atrocity they call Live weather since SU7 (“Some weather” would be more appropriate) I don’t use MSFS for other purposes than occasionally checking if anything significant has changed - which has not - so I didn’t notice until now and wanted to check right away.
Unfortunately the other atrocity in MSFS has hit me as today I had the message that Gaming Services have been updated. Guess what? Trying to start MSFS took me to the MS Store/Gaming Services site - so I had to dive into this Rube-Goldberg-Machine they call simulator AGAIN just to start the application.

This problem has not yet been corrected, despite first being reported several days ago. It certainly appears to a server-side issue, not a game bug, and this sort of thing has occurred on many occasions in the past.

This is not the sort of problem that should require “votes” to get Asobo’s attention. If the Live Weather servers are providing obsolete, outdated model data it should be looked into and corrected - especially when reported by multiple users. MS/Asobo should monitor their own servers, so they know immediately when the Live Weather model data is outdated. It should not depend on end-users to tell them.

For one thing, it exacerbates the problem of model vs. METAR cloud blending, and “abrupt transitions” when the current METAR (for instance) shows low clouds and rain, but the overlying MeteoBlue model has partly cloudy because it “thinks” that the storm system causing the low clouds and rain is still hundreds of miles upstream. That is exactly the situation today in the northeastern US.

It’s embarrassing how this sort of issue gets zero attention or acknowledgment from the development team.

Please do not ping team members. Thank you.

It should be noted that this outdated data (when it occurs) is most common in the morning or early afternoon GMT. I just rechecked at 21:20Z on 16 April, and at the moment, the cloud patterns on the world map appear to be a close match to the latest satellite photo.

Yes I agree, noticed the same pattern at those times also.

What I have noticed though is that even though the cloud on the world map is wrong, the actual cloud cover in the game seems to be correct. Which is different to how it used to be when we had a similar bug last year. When it happened last year if the cloud cover on map was wrong it was also wrong in game. At least now it seems to still be correct in the game itself.

I think if Asobo had focused fixed servers and make sure we got the correct data injected at the right time most of the issues with METAR not matched would have fixed it self without any kind of injection of METAR. No wonder we complained back then that it was inaccurate when we had 12 hours of data loss and winds 225@3kts all the time. Nobody can say forecasts predicts 225@3kts winds all the time right?

Instead of only fixing those issues we now have METAR, Metoblue and ATIS that conflicts. I think this makes it even harder now to find issues and fix weather. The only thing that shows perfect whats happening in the sim is simvar values. 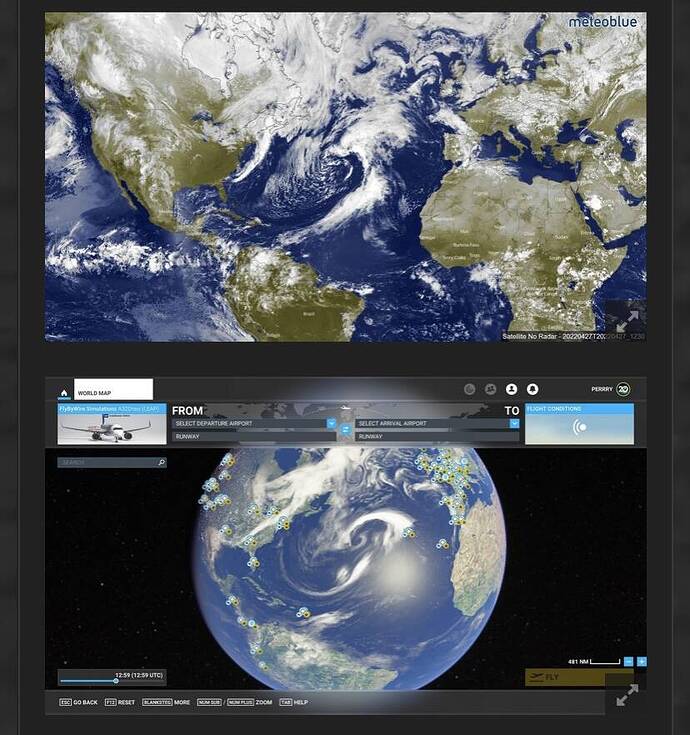 I noticed the same thing immediately when I fired up MSFS this morning. Your screen shots show the problem well. The MSFS cloud map shows a north/south oriented cold front passing through the center of New York State. That was the location of the front yesterday (April 26) in early afternoon, almost 24 hours ago. As the real time satellite photo shows, that front (this morning) is now offshore and well east of New York State.

Live Weather is once again serving up outdated MeteoBlue model data. The airport METAR weather is accurate to the current conditions - but not the model forecast

Having such a large time difference between MeteoBlue and METAR data makes very high probability to see a METAR bubble with a complete different weather than MeteoBlue and then hard transitions. MeteoBlue and METAR data should be integrated based on the same time snapshot.
I am just assuming based on previous posts. Maybe the integration logic is more complex than what we are thinking, but definitively, something is going wrong with the weather on that world map. Feedback is logged, is that means that a Zendesk ticket has been logged ?

Frustrating thing is that yesterday (and this morning around 0500z) it was marching up and I thought SU9 had brought a fix.

As usual though it was short lived.

MeteoBlue should generate an updated NEMS model forecast every 12 hours. According to the background info on their web site, the NEMS model runs begin at 0000Z and 1200Z, and are ready for end users by 0500Z and 1700Z.

I am quite certain that this problem is not on MeteoBlue’s end. They are a professional weather forecasting company, and Microsoft is only one of many clients who utilize their services, most of whom (like public utilities and agricultural interests) absolutely depend on forecast data being made available on a predictable schedule.

Agree and I am almost certain this will be on Asobo’s end and it wouldn’t be the first time. Like the bug we had last year before METAR integration when the sim was missing a whole 12 hours of data every single day from around 20:00z-08:00z and it took us as the user to actually notice this and report it over and over again until they eventually did something about it.

as usually will do tests and compare also.