Live weather stuck on data from 16th May

For you guys, the weather stucked at a specific time or it is going over on the same “period”?
The reason for my question is the world map is nowhere close to the IRL radar, but actually flown to Lodz, Poland yesterday and during the taxiing to the gate I noticed a few raindrop on the windshield. Quit the sim, then decided to make another leg and loaded in 45 mins later. That time it was pouring rain

It seems to me that it is repeating at least the same 12 hour period from May 17th. We had multiple rounds of heavy thunderstorms that day and it’s been doing that in sim everyday since then.

I’ve been testing since Friday and the wind, temperature and pressure are right, but the rest hasn’t changed for a few days. Stopped weather over the world.
Why is Microsoft doesn’t fix it live weather? I think it should be a priority. Sometimes I wonder about going back to P3D

I noticed some difference in the weather at the airport. I had rain showers moving through and the temperature and QNH matched the METAR as well.

I had an interesting observation in LOWW two days ago. During approach I had tailwind and within a few miles from the runway the turned quite quickly to match the wind reported in the METAR.

I am not an expert in the weather engine, but I think they somehow blend the METAR and the Meteoblue weather together around the airports? To me it seems that the METAR injection still works to some degree, but the Meteoblue injection not.

I am not an expert in the weather engine, but I think they somehow blend the METAR and the Meteoblue weather together around the airports? To me it seems that the METAR injection still works to some degree, but the Meteoblue injection not.

Yes, the METAR weather is blended with the MeteoBlue model weather, and the transition between METAR and model surface wind and temperature appears to happen around 1000 feet AGL above the airport.

I believe that the hourly airport METAR data does not come from MeteoBlue or from the LiveWeather servers at Azure, but from a third party server ever since r/w METAR was first added to the game in early December. For that reason, the METAR values for airport wind, pressure and temperature will normally be present (and accurate) any time LiveWeather is active - even if the MeteoBlue forecast model is missing or outdated.

Thanks for the explanation. I read something like that before but I wasn’t really sure how this works exactly. But it matches my observations.
I just hope that it will work again tomorrow after the update.

Have to check conditions but at a glance it looks very similar to previous screenshots. 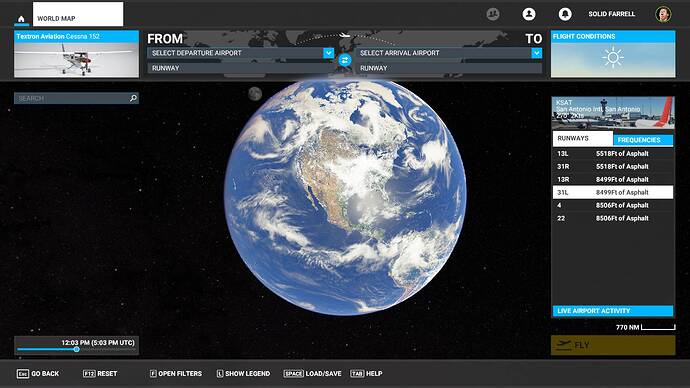 Yep. That is exactly the same cloud pattern that has been displayed for the last 8 days. I suspect it will start updating again once SU4 is installed tomorrow.

Thank you for this feedback, the team is working on it and I’ll try to give more insight on the fix that will be provided!

I’ll keep you updated and keep this thread open to further test the fix once live.

Thank you @OlieTsubasa443 . I assumed the current lock-up of the LiveWeather server (providing days-old data) was related to the upcoming debut of WU4.

If not, and this is an actual malfunction of the LiveWeather server, then may I suggest that there needs to be some kind of reporting mechanism put in place where Asobo/Microsoft can be immediately alerted when this happens. This is the third time in the last two months that the LiveWeather server has stopped importing new weather data from MeteoBlue and has been serving increasingly old/obsolete weather. This is the worst case of the three, because it has now been going on for over 8 days.

At present, our only option is to post in the forum and hope that someone at Asobo eventually notices and responds - and/or file a Zendesk report, which many of us have done only to see the report marked “solved” with no further feedback, and no change in the problem. This is not the sort of issue that should require “voting” to get someone’s attention - since LiveWeather is an essential and heavily promoted part of the MSFS experience.

Ideally, the server itself should automatically alert network engineers at Azure and/or developers at Asobo when it is “stuck” and not importing and processing new MeteoBlue data. I spent several years working on content delivery systems in television broadcasting that did exactly this if new content import stopped working.

Thank you for the information. It would indeed be helpful to get some information about the nature of the problems as that would take some guesswork out of the reporting and we could concentrate efforts on the actual issue instead of fruitless discussions or repetitions. It would be of particular interest if the issue is affecting all users or if it is known to the devs under which circumstances it occurs if it is only affecting some. And I second this:

suggest that there needs to be some kind of reporting mechanism

I hope all that won’t be necessary after the fix but the amount of posts relating to Live weather issues since launch makes scepticism inevitable.

I hope all that won’t be necessary after the fix but the amount of posts relating to Live weather issues since launch makes scepticism inevitable.

I don’t know how Yours weather. I it has been observing unchanged, weather unchanged since Friday. Tragedy

hmm, all we have today is,

not sure what that will achieve…

Tested at EDDS and can confirm working map and ingame live weather for me.

It reminds me something… fingers crossed

Why until 20z? How this works?