This is getting daft. I’m looking at endless screenshots claiming to show clear differences between the pre- and patched version and I’m struggling to find anything. Tip for posters: if you are going to post ‘before’ and ‘after’ images allegedly proving your point, do us all a favour:

This is very simple. At the moment it’s like looking at grainy black and white photos of a blurry object, whilst being assured this is, indeed, proof of the existence of UFOs.

The difficulty with trying to prove to the naysayers that the issue is real is that none of us expected Asobo to downgrade the sim in a misguided attempt to artificially boost performance. We could have done that ourselves just by altering settings, we didn’t need them to alter the sim so that it just doesnt bother drawing objects beyond a certain distance. That is not an improvement in performance at all, its just shifting to goal post. The point though is that many of us dont have screenshots showing before and after images, but the problem is very real.

You know, some never want to see, even if you wave right in front of them, that’s the problem.

I agree with that, water looks somehow “compressed” now if that is the right word. Not how it was advertised.

Okay an update. After a reboot of my PC seems it is blocked again. I found a way to permanently fix the issue and tested it after a reboot. You will need to access gpedit.msc and those with home versions of Win10 (most of us) will need to enable the disable gpedit.msc One suggested method and you are welcome to google other methods is below: Enabling GPEDIT microsoft console on Win 10 home edition Run the gpedit.msc command and then follow these intructions: Instructions to modify Teredo th…

The issues are more clearly seen while moving and some posters have already posted this effect happening more post patch. It doesn’t help that some people refuse to look closely. Let’s just continue providing evidence and sample points to show Devs we know what we are talking about

I’ve sent a zendesk for this a few days ago:

The difference I can see pre/post patch with water waves makes me thinking they are taking the UI setting in knots and feeding the shader with the value, instead of the value converted to km/h, therefore it takes 1.852 stronger wind speed now to get the same effect.

Can someone help with these artifacts ? I never seen this until now. I dont change my settings, i run everything on ultra. 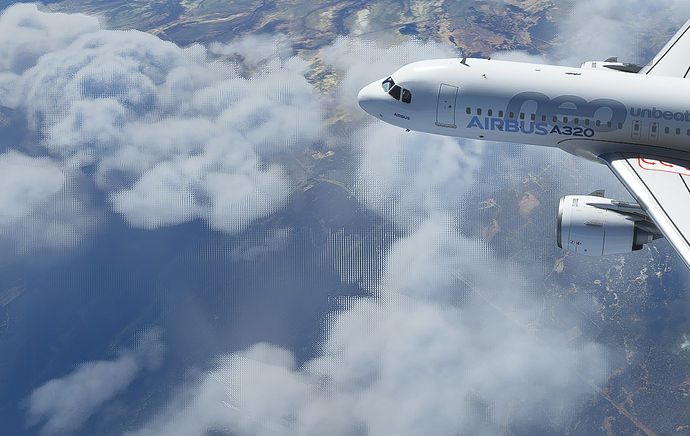 I didnt change anything at all. not even drivers so to be clear about suggestions. thank you

only thing whats new is this aircraft. didnt fly it for some while

Do you have latest graphic driver? Maybe reinstall previous version and compare.

no, one before that. i read some pretty negative stuff about newest drivers. but i might try

I just spent a while testing my autogen town in the UK to see the exact height at which the blurry/fuzzy roads and fields start coming in.
To test this, I used the drone camera and then moved the first layer of clouds up and down until I got the camera to line up with the bottom of the cloud layer.

Terrain Level of Detail set to 200 (I tried it at 100 and 150 and this is definitely the option that affects this). Even at 200 the roads start to blur at 4000ft. At 9000ft is where they really go absolute sh1t. This for me is the limit of how high I will now fly until this is fixed (thank God I prefer GA aircraft).

This was definitely a lot better at launch. They’ve tweaked this for performance for sure.

They shouldn’t tweak it for performance
I call this MARKETING LIE
If they would have advertised it like this, I wouldn’t buy it
And I guess, a lot of other people, here 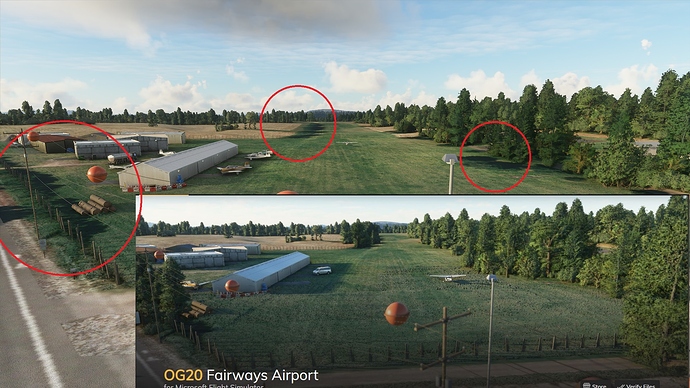 That, good sir, I doubt they will. This was horrible even before the patch, reported to zendesk.
And reply was

Why dont you try higher setting, 550 works good for me and it still performs OK. except dense photogrammetry areas. at 900 - 1000 I hit VRAM limit very easily and it starts to stutter

Sometimes the games runs better after restarting and deleting the rolling cache. There’s something not quite working with the cache management. The longer it runs the worse performance gets.

Today it got really bad, second long stutters, frame rate down to a third of what I normally get. Deleting the cache and restarting the game cleared it all up. Continuing from the airport I landed at, the scenery looked great again (freshly grabbed from Azure I guess)

I also suspect keeping the rolling cache smaller rather than larger will help performance. Les data to manage and if you have a good connection, why keep all that in the cache. I have mine set to 16 GB, maybe smaller is still better. I think the game started with 8 GB for the cache?

Yeah, i am the lucky one today

It seems that "we are not alone " 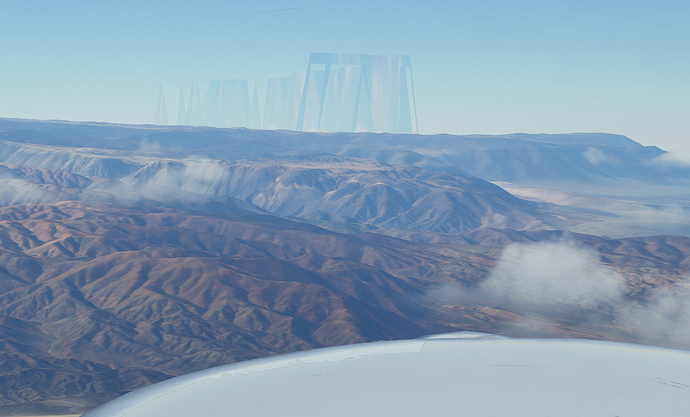 You’re not wrong, tree’s are missing everywhere. Some of my favorite grass strips are missing most, if not all the tree’s. Ultra Graphics.

The question is: how do the trees compare to an actual aerial photo of the same airport?

Initially the complaint was “there are too many trees”, and “the trees are too tall”

Now it’s “there aren’t enough trees”, and “the trees are too short”.

I tend to be in the “too many/too dense” camp. On initial release, like everyone, I flew over my own neighborhood. All the trees were there, and then some. The AI was even turning what are actually large bushes into trees, and almost all were too tall.

Post patch 2, the same area looks far more realistic. I can compare what I see in the sim with an aerial photo, and with what I see with my own two eyes looking out my upstairs window as I write this, and the post-patch trees are much closer to reality.

The trees are real. You just cant see them

Those are special trees, so called pop-in trees

I found out that in some situations the user.cfg write wrong data.

Check the user.cfg if the settings match the UI settings after exit.

In my case i had several times changes that affect lower quality at next start.

I had no HDR enabled in WIN10 and the UI and in the user.cfg HDR10 was enabled set to 1.

Windowed mode was set on 1 not 0 and monitor 0.

Several quality entries about AA was not at max.

Terrain and Objects LOD I would let at 2.0 for both.
Wit terrain LOD 2.3-.2.5 it’s at high FL and none dense areas possible.

Post processing is a a user choice,
I set all to 0 exclude color grading and eye adaption.
And post processing enabled 1.
Get best results for me.

After changes save the file. Any changes in the UI after start could set the user.cfg to unexpected different settings.

So after editing the user.cfg it’s mandatory to not change in game graphic settings in the UI.

The master user user.cfg is in all drive installation variants on the main drive WIN10.

Hi All, I was getting frustrated with the triangle spiked photogrammatery at a distance that looked awful and started messing with the usercfg file. The below images are taken from near KMSP. Before doing this make sure the Terrain LOD is set to 200 in game. It can be done simply by opening the usercfg file in a text editor, and editing the Terrain LOD Factor to different number such as 3.0 or 4.0, after this save your changes and set the usercfg file to read-only. At the highest i went to 9.0…

Yeah it does a bit. I too thought the clouds looked great at first. I tried everything but they simply won’t go back to their original state. I´ve also noticed that the shadows have something similar. Have a look.