There is a very small “bubble”, typical of any 3d game or sim., where the detail is high and it looks quite good. But that bubble is extremely small. As many have posted in pics, it is about 10% of the overall viewing area. Beyond that, the LOD is very thin and everything looks like minecraft.

I noticed the same thing today and this is making me angry right now. We were promised a PC sim and this is pure console mentality.

Unreadable cockpit instruments and pixelated ground textures, in a 10 km bubble that is viewed through a fisheye lense. Is this the way this is going from now on? What next, the Himalayas as billboards and depth of field to hide everything on the horizon?

For me at least, it seems like the tree draw distance is lowered quite significantly than before the patch

I’m wondering if since ms/asobo are concentrating heavily on a major issue like performance that they intentionally did dial down the graphics fidelity to alleviate this issue to at least some degree. And then, when performance is ironed out, they will gradually begin to increase graphics quality. We will soon see the flight sim we were introduced to (and became spoiled with). And then things will continue to improve from there. Just a thought. Who knows.

This is not how it works.

They should introduce those additonal options in the UI so everyone can adjust their fps but they cannot just switch it on and off and on and off again.

And there are already sliders in place to adjust trees and LODs etc.
No need to force a downgrade to everyone.

Can someone tell me what this line is? 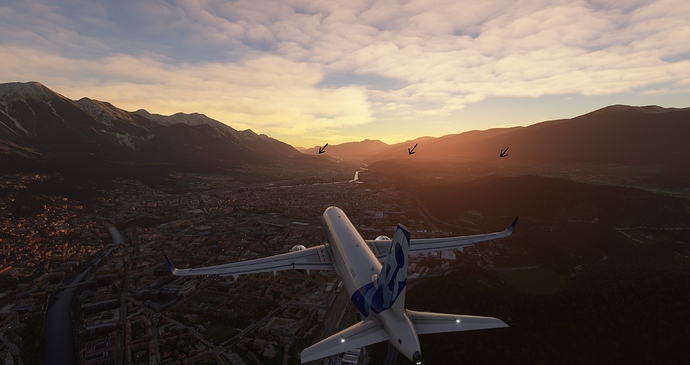 This is a known bug.

Yeah. its been there since launch.

Ok. Thank you. I am in the user.cfg to tweak my shadow resolution and i see that under Post Processing there is a option called Film grain. It is enabled but did someone notice Film grain in the game?

Yes, no downgrading as far as I can see

It’s almost the same thing that happened to FSX when nobody’s hardware could run the huge bitmaps. So Microsoft went and released the performance patch (SP 2 - I believe?). It made the sim flyable but the trade-off was having to forfeit good visuals. Then as PC’S got more powerful in the CPU department (especially with fsx, but not as much as GPU as THIS MSFS2020 needs), you wound up getting 3rd party mesh and scenery (Ultimate Terrain and others) that needed that power - so it went full circle and the cost landed in the end user’s wallets!
I suppose that with this patch saying “performance enhancements”, it means a hit in the eye candy department.

So my verdict with regard to this patch isn’t in yet, but soon will be. I’ll chime in in a couple of days. Blue skies folks

Then its good for you that you didnt experience full power of ultra before this patch. You wont be dissapointed going from Medium to ultra for sure

I’m hoping that’ll be the case. I’m sure things will look and run much more smoothly. I was getting the odd micro stutter with the 6700k. Another hour or so, I’ll fire it up with fingers crossed. Cheers Surlier

It was long time ago, but the way i remember, FSX SP2(acceleration) fixed many issues, without downgrading the graphics. The thing is, without scenery, weather, airplane add- on, FSX was quiet simple,at start it suffered greatly having very bad CPU optimization etc. This new FS2020 looked so promising(still does!)the scenery so good out of the box, that one believed, we are not gonna need any “big scale” scenery add- on and other goodies to make it look real… To me, this second patch was a big slap on the face. The thing is, this sim was a lot more playable for the general player base, than FSX was at launch . I`m playing on an outdated rig, optimized for gaming, but still outdated , and was surprised how playable and enjoyable this sim was ,compared to the previous ones… (not talking about stock airplane flight behavior ,that is very bad at the moment ) There was absolutely no need to downgrade the visuals…

Yeah im no coding expert but why didnt they just give us more sliders or so.

Downgrading is not optimising as many said.

Is there a way to rollback the game on steam under beta version?

The only case I’ve seen of a friend having real image quality swings, was when GeForce Experience was on his system. This p.o.s. software CAN and WILL change your graphical settings, including mid-flight, if it feels your fps are low.

If you have it, uninstall nVidia drivers, reinstall them making sure Geforce Experience is ticked off, then go to your nVidia settings and reset the parameters to default. It fixed the problem for my friend.

Oh and btw, the “horizon line” bug, I do have. It’s been here since release day, a grey line marking the horizon when there are mountains in the direction of the sun.

nVidia geforce experience has nothing to do with the LOD issues, I think