Trees popping up, Bad LOD I’m was on LOD 200 before patch, I can not increase the slider any further but the rendering distance of trees and buildings is noticeably reduced compared to the distance prior patch 2. This is not good, ruins it for me.

Everybody send to zendesk. It’s an issue for sure!

Ive pushed to 200 and still cant get the LOD to anywhere near where it was , also what have they done to the trees , there seems to be far less of them and from a distance the look like little black spikes .

Airports look poor with the lack of trees on final approach and the terrible pop up as you get close to touchdown.

You can increase your LOD sliders further through the CFG file:

it doesn’t work for trees.

I agree with this post, this is a real shame!. This is NOT the way to gain performance!

The lod has been degraded to a ridiculous level, I can’t see any tree farder than half a mile in most situations (all sliders to 200), wth?. And to gain absolutely no performance for me, pretty much the opposite, the sim runs worse than before.

Another theory - did they globally reduce trees size (because lot of complains) without taking other side effects in account? So it may affect / break “LOD resolver” so trees are appearing in closer radius than before, because small trees may dissapear before bigger ones? Just speculating…

post the latest patch is the LOD scaling has been altered. So your settings pre patch are less post patch. Eg if you were on 100 for terrain and buildings detail that is the equivalent of 50 post patch. You will find the difference most noticeable in
Photogrammetry areas that have far more detail to process. On low LOD (100 or lower) you’ll only get high detail close to your plane, and so you’ll get texture popping etx

I was on 100 LOD buildings and textures before patch. Now I have bumped th

MSFS is in perfect shape. LODs been never better. Now its almost as gorgeous as FSX

I agree. It is a pity. MSFS 2020 was a stunner mainly because for the first time in flightsim history the scenery looked rather like a film than like a computer game. Now after this patch the sim has lost exactly that quality, that’s at least my impression. To me it is no longer spectacular, because now it looks as computer generated as any other sim. Admittedly, it is more variable, since the terrain is based on satellite photos, but 3d-objects, especially trees and bushes, have completely lost their spectacular looks. E.g. my hometown, Berlin, does not look anywhere close to realistic after the patch. From 3000ft everything that is as remote as a mile and more from your position looks like X-Plane 10 autogen. Maybe they just do not want do update the trees in ten years, when forests are dying, so they have made forests already look pretty dead fom a distance.

Vegetation density61324×141 204 KB
This is Schoenefeld, south of Berlin. At the end of the runway there is a dense forest. After the patch there are just some “twigs” popping out of the landscape. Some of you might not notice the difference ingame due to screen size. On a 27" screen these “post-bushfire-forests” might not be striking. But I’m flying on a 55" screen in 4k. These crippled trees are huge there and they are really disturbing. And even with graphics maxed out, it does not look anywhere close to what it had looked before.
I hope they’re gonna fix that, now that we have seen what this sim is really capable of. It could look amazing and especially atmosphere and weather are incredible. I am optimistic that as soon as more users have more powerful machines the sim will be using the tremenduous potential it has already shown. This step back will not last forever.
Have a nice day y’all and I wish all of us a lot of patience.
5 Likes
Paco572 September 20, 2020, 6:20pm #29

I agree this needs to be addressed.

increasing tree quality does, however. i had to go from medium to high and i can see trees further out

They should put a slider in, and let us decide the tree density.

It’s not about CLOSER or FURTHER
The density is gone

Guess, please VOTE on this topic or most likely, nothing will get done by Asobo, per their forum rules…
https://forums.flightsimulator.com/t/asobo-ms-please-fix-photogrammetry-latest-patch-has-made-it-worse/279217/8

This is exactly what the problem is.

Same here, I increased terrain and buildings to 150 from 100 and set trees to Ultra from High. Now it looks closer to what it did before the patch (high settings 1080p) Photogrammetry can use higher values but there isn’t much of that where I’m flying.

To fix the night lighting I need to increase the rendering scale. 120 still gives me the same performance, yet higher and the GPU starts to become the limiting factor. For screenshots I temporarily up it to 200 to get good lighting. Maybe TAA has changed, all lights look smudged out at 1080p rendering scale 100 since the patch. Nothing like how my old night time screenshots look. Pre-patch, dots, post-patch, smudges.

Too bad there is no button for high-res screenshots. I used that all the time to make 8K screenshots in Elite Dangerous.

can you post a few screens demonstrating you can make trees render farder please?. I changed several paramenters in the user.cfg.opt with no success. thanks!

Voted.
Thx for the llink!

Quick comparison: First Pic was taken above Sansibar before the patch. All settings high. All LOD settings at 100. 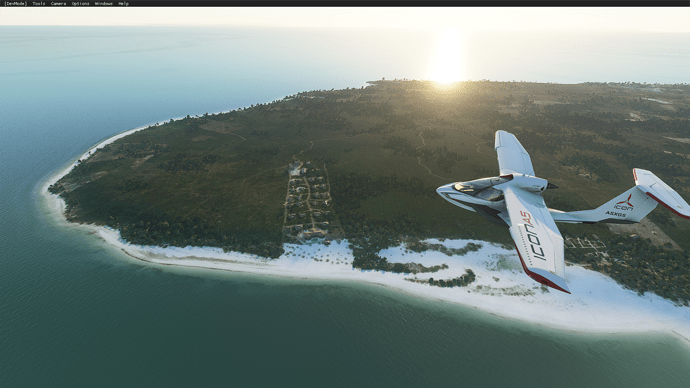 Second picture was taken above the same spot but this time after the patch with Terrain LOD at 150, buildings at 125 and trees at ultra (!) 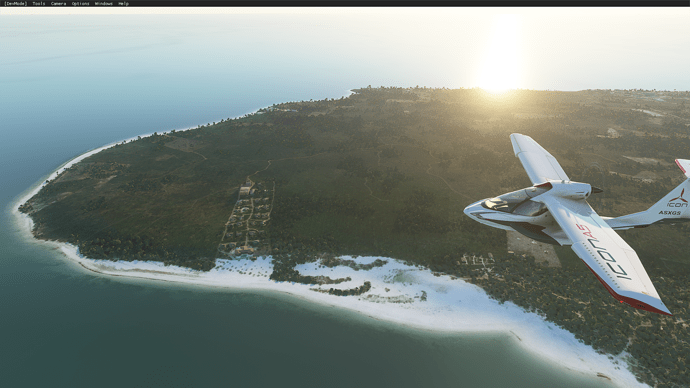