Logbook not updating after patch

The logging seems tied to the objectives system, and in part this is updated by interacting with ATC, or at least ATC assists with the triggering of objectives being updated. If this process interrupted, then it will fail to record a take off or landing.

What about IVAO and VATSIM players? They don’t need in game ATC!

Sorry to disagree. I don’t care for any objectives. If I fly from a ramp to a ramp of another airport the flight should be logged with proper takeoff and landing entry.

My $0.02.
After reading all of this, I flew with the objectives window open. It seems fairly obvious to me that at least part of the problem is in how FS decides the current state of the flight state machine. The “next state” triggers are too easily confused. For example, landed state will return to pre-takeoff state if a wheel goes off the runway - even on a grass field where the edge of the runway is not visually well defined.

So, if we fail the state machine somehow, maybe print the failure in the objectives window? At least that way we would have a clue as to what went wrong.

I also suggest allowing the user to choose between

Sorry to disagree. I don’t care for any objectives.

I’m sorry that both you, and @TenPatrol missed my point. I don’t disagree that you shouldn’t have to do this. What I am saying is that currently you do. Your are speaking of ideals, I am talking of facts.

Ideally, they can fix this so you can do whatever you please, and it will magically know you took off or landed, but currently it doesn’t, and if you don’t do what is currently necessary, then it won’t log.

So I agree with your sentiment, but that doesn’t matter at the end of the day.

It seems fairly obvious to me that at least part of the problem is in how FS decides the current state of the flight state machine.

Exactly, and if you deviate from this then it fails to log.

So I’m flying that route solo, an I have left the Objectives window open, which normally I never do. I just wanted to follow the flow, and at some point intend to record a take-off, from cold start to handing off once airborne. That would show all the expected steps for a towered airport, then I would repeat for an un-towered one. It would be interesting to see the stage that it gets stuck on, which as far as I remember is usually the “taxi to maximum of 15kts”.

Well that seemed to work out okay, except it was around 16:44 when I landed, not 16:02. I have consistently seen at least 20 minutes chopped off the end of a flight, but the start is usually pretty accurate. Three take offs, from the first three, and three landings for the last three. I did land on top of Kilimanjaro, but I guess it has no way of logging that? The objectives window did change from “climb to cruise altitude”, to “End Flight: Shut down engine” though.

The problem is your words say what you believe happened, but a video would show what actually happened, and I have yet to see a single video from someone illustrating these problems.

Not sure why I would commit such time and system resources… just to convince you.

And frankly, this is a pretty insulting comment, one of the most condescending I have seen in these forums. Do you think people are imagining these things happening? It is a statement of fact. This is not some issue like fuel-usage being out, but it turns out the APU is left on for the flight… It is pretty cut and dry

And as they say in aviation… any landing is a good landing. Putting it on the ground at your desired airport should indeed be logged as a landing, even if you park it on the fricken runway

Do you think people are imagining these things happening?

Not at all. I have had it happen to me myself, I’m simply suggesting that there is a logical reason for these things happening, that may not be obvious, which is why I was saying that a video would show more than words, that’s all. And for the most part I have sussed what it expects you to do, so most of the time my flights are logged correctly.

your statement made the implicit suggestion that because you had not seen a video there was no evidence it was happening. There are ways to suggest a video without being antagonistic and suggestive it is not happening 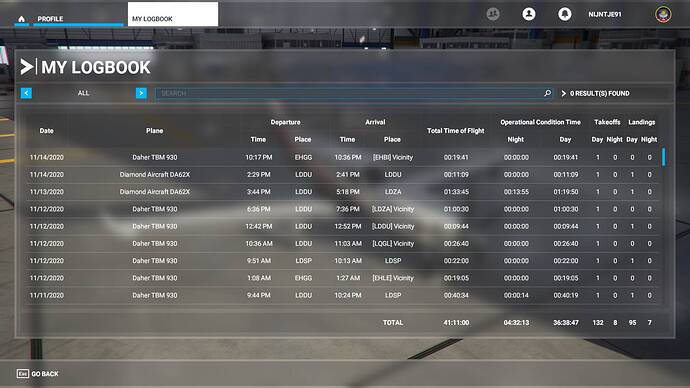 First, I haven’t logged a flight since 11-11-20. My work-around was to land at an airport/strip, etc. Then I would activate the AI. The AI would taxi to the appropriate parking spot and shut down. The flight would then log.
This no longer works as of the latest patch. The AI once activated now just drives the plane around all over the place until it crashes. It can not find a parking spot at all at any of the smaller airstrips.

Same here and added to that is that I fly a TBM930 but it records me as a Citation CJ4.

One flight of over an hour is shown as 4 flights (in vicinity) in a totally other continent, of 1 to 2 minutes.

I tried all your failed landing logs

Today is Nov 15 just landed and flight didn’t log. I flew pretty much all day on the 14th and absolutely nothing got logged. I’m flying the 747 my last logged flight was on the 11th smh.

Most of those entries are non-sense

Is there a work around for this? This is insane.

Little Navmap, maybe Asobo can ask the creator how to make their own logbook work.

Is there a work around for this? This is insane.

Not a workaround per se. You have to use the sim how it expects, not how you want to, whether that is logical to the user or not. Another user asked about users of Vatsim, where a human is ATC. Sadly the sim neither knows or cares about this, and if you don’t jump through the hoops the sim expects, your flights won’t log correctly.

You may get the actual flight logged, but if you don’t perform the actions the sim expects you to i.e. requesting taxi to active, holding short, requesting take-off, entering runway, and finally take-off, it doesn’t detect you haven’t taken off, so when the log is created it may not show that take-off.

This isn’t a workaround, it is a set of procedures to change the in-game state of your flight through a series of steps.

However Asobo decide to detect you have left the ground, some tick box or stage has to be passed so that, for example, if you didn’t even request take-off, and decided to take off on the taxi way, or across the ramp, a take-off even would still be logged.

same here… have not had a logged flight since then either. it is total pile of excrement!

still loving the sim though… problemsa and all. During a flight last week, the AutoPilot just decided to be completely broken and misbehave. Even altitude intervention was refusing to work as it had just the flight before, but even then… I approached it as a failure, attempted to problem solve and wound up with a beautiful landing that I was quite proud of.

that does not mean there are not bugs though

How do you request taxi to the active or permission to land or taxi to parking at an airport with no tower? Until the last few updates, my flights have all logged [take off, landing & flight time). The last month or so all I get recorded is my flight time. Rarely will I get credit for the takeoff or landing. I go through the steps of announcing that I’m taxiing and announcing that I am taking off. When I am coming in for a landing, I announce that I am making a full stop landing, announce my position, announce that I am on final and then announce when I am clear of the runway. I’ve even gone so far as to delicate control to the copilot to park. I made a 20 minute flight last night from 1O2 to KUKI following these steps and all I got credit for was my flight time. It said 0 under takeoff and landing.

Glamoč Airport is an airport situated in the municipality of Glamoč in Bosnia and Herzegovina, at the north side of Glamočko field, about 10 kilometers away from the town of Glamoč.

while that answers your question, what I really come to say is I like your username and lament the fact I am now on the other side of the world… and failed to get a Delftware Nijntje at the museum in Utrecht (Miffy to us non KLM flyers… checks own livery, umm non-Dutch flyers lol)

btw… you know Utrecht is the best city in the world right?

also… Has anyone landed or setup a custom airport at Soesterberg??? So far I have only managed to ride a bike down the runway (real world). side note, it would be cool if the Military Air museum was modeled properly!

How do you request taxi to the active or permission to land or taxi to parking at an airport with no tower?

You simply announce you are taking off from such, and such a runway. The issue with those is it often doesn’t transition between the state of taxiing to the runway, then entering the runway. I have managed to get it to trigger a few times, but I had to do more than just enter the runway. In one case I had to taxi past the threshold, crossing on to the grass.

Now that is interesting … so far, in my troubled logbook, at least the aircraft was always correct.

If this can happen, then (I guess) it moves this bug into a totally different region of the game code. Such a mismatch can not be explained by a lack of “proper check point” actions during flight … where only ATC and the objectives play a role.

This looks like something really low-level is not doing what it should.

And I am starting to wonder if the “buggy” airport history is also related to this topic.
I recently started to notice that the “last 3 airports” which show up in my history, when I try to pick a new departure location, are not really the last 3 locations that I used.