You might want to look here, as this is a different issue to the missing flight data in your log book.

… and it seems like the landing count now also is “less correct” again.
Looks like a regression to me.

I think its been said before, but its not a bug per se, but perhaps a poorly designed implementation of how your flights are recorded. I can post plenty of screenshots of my logbook showing things like 4 take-offs, and 4 landings. The difference is I interact with ATC, and go through the stages of flight as the sim expects. If you take off but the sim thinks you should be taxiing, it won’t progress to the next phase of your flight, and the take off will not be logged.

Don’t get me wrong, I do sometimes get take-offs missed, usually at uncontrolled airports. Landings are harder to miss, but I have noticed that when doing a touch, and go for example, if you don’t reduce your speed enough it won’t log the landing. You can tell when it logs as you typically get that little progress spinner at the bottom right of your screen. I found that out the hard way when I was aiming to get achievement for visiting 500 airports. If you land, then take off immediately it doesn’t count, you have to slow down. I don’t remember exactly but I think its around 15kts.

If found a post where I tried to catch as many possible states your flight is in, from startup, taxi, takeoff, landing, and taxi to parking. Even then I think I missed one or two as they sometimes only appear on screen for a few seconds.

I have a similar problem. As far as I understood, it is different. When I finish a flight and shut down engines the logbook window pops up and then I click continue. The flight is correctly recorded but MSFS creates a new flight as I was starting from the destiny airport. See picture for example flight: SBGL to SBGR: 42:41 minutes and a new flight SBGR to SBGR created from MSFS with 0 hours. The previous flight also had same wrong log (SBGL → SBGL) 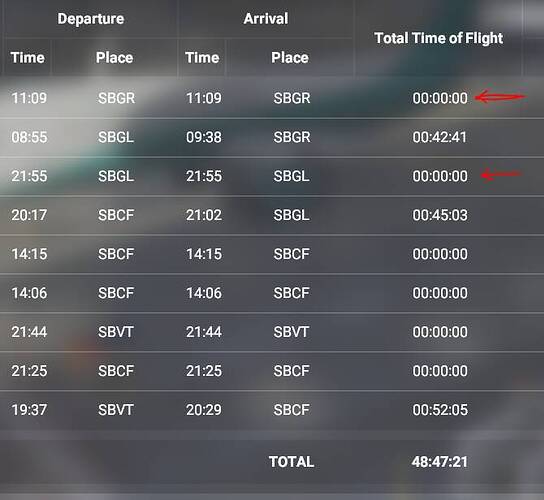 Pressing Continue is a long time issue, and should be avoided.

I logged a ticket about this last August or September. If you fly from A to B, land then hit Continue, then fly from B to C, then return to main menu, it will only log B to C. A to B is lost.

I haven’t tested this since, so lord knows what it does now. I just avoided that feature, and shutdown at the end of every flight that I want logged.

The same issue here. It records of appr. 10-15% of my flights and 5% of my takeoffs and landings. This logbook is totally unusable.

Not that I’m really bothered to use it as I regard it as frippery, I occasionally open it just out of curiosity. Well, it clearly doesn’t track much properly: Sometimes a take-off with no landing - even though an uneventful landing occured, and often a landing is recorded without a take-off despite a flight time being shown.

If you start Cold & Dark it does not register the take of. I’ve got about 10 take offs but over 300 landings!!!

I can recommend fshub.io for logging your flights.

Thank you. But I’m really not too concerned about logging my flights. I just thought to bring up the subject since I’d just taken a look. I’d rather Asobo spends more time on core bugs and refinements.

If you start Cold & Dark it does not register the take of.

Not true. I always start C&D, except that rare occasion where I have forgotten to chose a ramp start.

Takeoff, and landing detection is driven by what you see on the Objectives window. And it in turn can be nudged along by interacting with ATC. I made a post about this a while back where I tried to log as many of those different phases of flight, and what was needed to advance them.

I’ll try, and dig it out. Can’t believe I forgot to bookmark that…

Volanta is a good alternative for logging. But I’m like you really, I’m not too concern about my log. 800 hours in, and I don’t even bother to have a look at it.

the ingame logbook is the most useless logbook i’ve ever come across in any flight simulators.
a recent update wiped logbooks of many users ingame, including myself.
it’s kind of concerning when a company can’t even get a simple logbook right, much less completely wiping it.

i’m with the other poster who mentioned it, i use fshub.io for my logbook needs. that works great, though i do find it has issues logging heli flights, but even then, it’s a million times better than the garbage we have ingame.

Oh ■■■■■!
How can you do something like that when flying bush trip somewhere in Africa of Papua and you land on piece of grass!!!
It’s nonsense!
I found this problem yesterday after 7 months of flying. I fly every day 4 - 5 hours so that I have about 800 - 900 hours, but my logbook shows only 140 hours!!! F*****g Asobo!
I lost about 700 hours!!!
I fly mostly bush trips. The strange thing is that in one bush trip I get the correct leg count (doesnt matter how I end it) and in other bush trip, which leg I end in the same manner, I get 00:00 hours.
That definately bug, and it has nothing to do with CONTINUE and things like that.

That explains it, most of my flights are VFR with no ATC or ground services.