Is it possible to record a long haul flight, in VFR, with GPS and without flight plan ?

you just pick a departing parking/gate and press Fly. Don’t pick a destination. You’ll be in a session in VFR and no flight plan.

What do you want to say by: to choose a parking ? first
Then, I shall be in a VFR session, OK, but Is it that I’m about to quit ?

Excuse me , my last explanation is bad. I wanted to say: the last flight is in VFR, without flight plan. Is it that flight which will be recorded ?

Ohh you mean in the flight log? I think so. As long as you depart an airport and you land properly at another airport and park and cutoff engines, even in VFR without a flight plan should work with the log.

But I never tried it myself. I don’t fly VFR at all, so I don’t know if it will work. It should work, but I’m can’t guarantee that it will.

Thank you for your cooperation

I can confirm this is correct!

Then, you confirm that is said by Neo4316. Well, but if you interrupt a flight and you want to record it, can you take it again, for exemple to morrow, to continue tower its destination ?

It’s “towards” that I wanted to write and no “tower”. It’s a mistake.

I don’t think so. Maybe try to “save” the flight, then continue to “load” the flight when you continue. But I’m not sure. I think the log will only work if you complete a full Departure and Landing and engine cut-off at a destination, wherever that is. But I’m not sure. You should just try it.

Impossible to record a flight.

Yes you can save your current in flight situation, then load it up later and continue. Just press Esc in flight, then choose [Save/Load] at the bottom of the screen.
PS the current weather is not saved though, so you may not have similar weather when you re-load

Are you trying to record a long trip? I use Sim Toolkit Pro for this. I do short legs and enjoy the flight, and STKP saves the log and makes a nice map so I know where I’ve been. 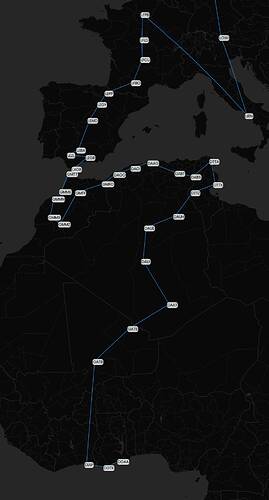 That explanation is clear and I thank you much for that.

I don’t arrive to record a flight. I abandon !