I regularly land the Longitude on 3500 feet runways.

What is the shortest runway that you have landed a Longitude and challenge us to try?

My hometown airport is KVRB and I can easily land on 30R which is 3504 feet. There is no ILS or RNAV into that runway. So it’s a Visual Approach only. I can actually land only using half the runway using full flaps and spoilers. Don’t even need Reverse Thrusters.

I know the owner of Paris Air and also have a few friends that are Flight Instructors at FlightSafety Academy.

Just south of me is KFPR, which does have ILS RWYs along with RNAV. KVRB only has RNAV.

I love flying over my house and easily being able to tell which one it is. The graphics on this sim are awesome.

I landed at VNLK. That’s the shortest runway I know of.

I will give it a try. That is definitely hard! Tried a few time and crashed an burned. Will continue trying until I do it!

Engines need to be idle, full flaps, full spoilers. You’ll need to come in at a dive to maintain airspeed above stall. Have the reversers already active before touch down. When you flare you will lose a lot of airspeed.

I crashed and burned a few time, so I tried in a smaller plane to get the hang of it. That big rock wall at the beginning of the runways doesn’t help.

Easily landed in an X Cub. I saw a TBM 930 up there so I also landed with that.

Then back to the Longitude.

You should be approaching it from the cliff side. The runway ends at the wall which has claimed a few lives. Heading of 060

Not flying now, and didn’t pay attention to heading, but approaching from low side. Coming in facing the mountain.

Biggest problem is bleeding off a lot of altitude and speed in a short distance.

I know I have to already be around 9500 feet and slow before touching down.

But on most attempts, my vertical speed has been too fast. Either from not having descended enough or too much and them having to climb and then come up too fast and have to drop quick.

I’m just starting my approach without putting a departure, which puts me at about 10k feet and pretty close. So I have to do everything fast to get the Longitude to the right speed and elevation.

But I will continue trying until I get it!!

If I land there, I can land anywhere

Set a custom departure location in the map further away to give you some more time to establish your approach.

After flying MSFS, I know that I could land a real plane there…but only once.

Out of curiosity I’ve tried that as well and I didn’t even need the full runway.
No tricks need. (spoilers armed, max brakes and reverse at touchdown)
Slighty slow, but otherwise a normal approach.

A few items to check:

I made it, but gently tapped the wall at the end.

Have to try gain and maybe remove some weight. I think I had half a tank of gas and four passengers.

Finally made it without hitting the wall

That is where I stopped. But I had a lot of failed attempts!

I was able to take off with only with full flaps descending into valley to get more speed to get out.

This is a very hard landing on a Longitude. I’ve tried it again a few times and failed. Everything has to be perfect!

I don’t even want to show you pictures of some of my really bad attempts. But maybe, later I will.

Approaches are easier without the spoilers and have them Armed to Auto Extend on landing, but that at time they fail to extend fails since I think a bounce doesn’t extend them and then you can’t stop.

When low and the Spoilers are Armed, it’s almost impossible to ascend even at full throttle. So if you stay above the runway before touchdown, the spoilers could help slowing you down.

I will try again both ways and see which seems to work better.

But this is no place for a Longitude to be landing

I think I was lucky to have made that one landing, all others have failed. I wish I had a video of a 540 forward flip I did one of my latest landing attempts.

But maybe the wine the Stewardess gave me with my meal wasn’t the wisest choice for a beverage. 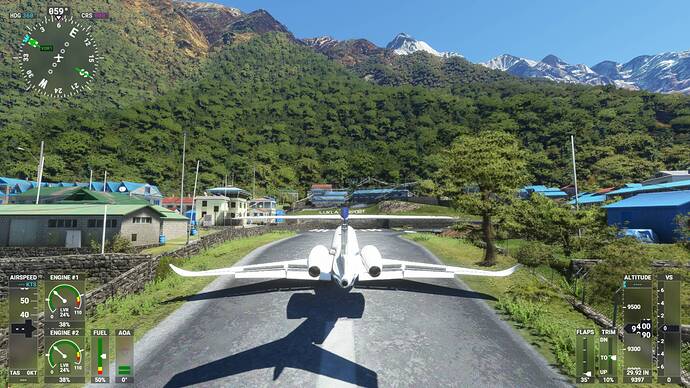 Haha… I love this thread. I recently upgraded to get the Longitude, and all the extras. My love for MSFS2020 grew stronger just by upgrading…
I checked out Cessna’s Longitude website and the “proposed” landing distance is 3170 ft while take off is 4810 ft.

So, if you can land there, you may not be able to take off.

I know, the sim is not as realistic and we could possibly get in and out of these airports. Keep in mind that (I believe) the take off distance is based on worst case (full fuel, full cargo).

If there are no performance tables, takeoff data are always for the max takeoff weight case and landing data for the max landing weight at ISA conditions. (Sea level, 15°C and 1013hpa).

Btw. It’s the same IRL. Getting into an airport isn’t the problem. Getting out of it is!

I TO/L LFLJ in the Airbus 320. Note: I removed the passengers, for their safety, and with very low fuel.

One of the other short field landing challenges is Saint-Barthelemy (TFFJ) in the TBM. The challenge is landing “down hill” but I bet it would be even more of a challenge in the Longitude. The runway is 2107 foot.

I was able to TO/Land 10/28 without any problems. The other way 28/10 was harder because of the hill/tree at the top. I hit the hill on the way out but was able to land OK. I had the default 50% load.

I will try TFFJ on the Longitude and see how I do. I’m sure it will be a challenge! But with a light load and a very slow approach it’s probably doable.

That is about twice the length of VNLK, but it’s downhill and a big challenge, so lets see how many attempts I have to do before I can land.

I’ve already had a few glasses of wine, so I can’t fly tonight

I was able to land on RWY 28 after a few attempts, but nose wheel ended in the grass. I have to try for a better landing, but I really think I can land without touching the grass.

I will try again tomorrow! I will also try RWY 10. 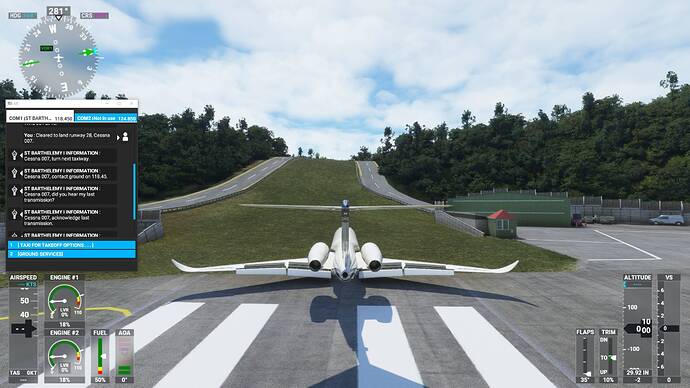 Did anybody notice that some of the airplanes have a Hobbs meter? I noticed the one in the Longitude. It was zero when I first got in it. Mine says 21.1. So, I believe the Hobbs meter will accurately track how much time we spent “flying the plane”.

“The Hobbs meter measures the hours the aircraft is being operated, and it was invented in 1938 by John Weston Hobbs. The switch controlling the Hobbs meter can be set to turn on when the Master switch is turned on, via oil pressure after the engine is started, or multiple other methods. The Hobbs meter records time as hours and tenths of hours, and it is a true measurement of how long the airplane is being operated. In other words, when an hour passes on your watch, an hour has passed on the Hobbs meter. Pilots should use Hobbs meter time when logging flight hours.”

Yes, that is an accurate way to see how much flight time you have on a given plane.

I got a really cool livery for the Longitude. I now realize the Hobbs will be recorded separate for each livery. The Hobbs using this livery now shows 2 hours instead of over 25.