Do you have any add-ons in your Community folder? If yes, please remove and retest before posting.
Xbox.

Are you using Developer Mode or made changes in it?
Xbox.

Brief description of the issue:
Individual activity and inner stats are OK, but logbook is empty and total hours is zero.

Detail steps to reproduce the issue encountered:
No idea, happened after I was doing some flyover of an airport. I did not get any specific message. Just the logbook is now empty (besides the last flight).

PC specs for those who want to assist (if not entered in your profile)
Xbox.

Build Version # when you first started experiencing this issue:
1.18.15.0.

Are you on the Steam or Microsoft Store version?
Xbox.

Did you submit this to Zendesk? If so, what is your ticket #?
No.

Of course most of achievement progress is gone (except unlocked ones basically).

but logbook is empty and total hours is zero.

there is a huge topic about:

( not special for xbox )

Except I got no such message and there was no package release or hotfix or anything. I was minding my own business and everyone is on vacation and voilà. I very much doubt this is an issue specific to content manager glitches. There’s probably something broken deep within the logbook mechanism that can be triggered by the brutal reset of a “packages out of date” error but can also happen randomly.

Before that I got random last flight logs deletions but never the whole logbook. And being on Xbox there’s hardly any mod to blame.

One example is the latest entry in that topic: ( a simple re-login )

Lost almost 400hrs of flight time today. Never had the “package out of date” during flight. I went offline with my account and logged in again, to see if it would solve the azure atc bug. Then when back in the sim all my hours and logbook entries were gone

This issue is clearly not solved. When you cant go offline without loosing your data. So… Asobo how do I get my hours and logbook back?

■■■■, browsed that topic quickly yesterday but didn’t realize there were so many different situations where this happens. Sucks. I freakin love the game otherwise!

I open previously a Zendesk ticket #118094 for this issue, and also describe it in this topic.

I also lost twice my logbook and my progression.
But, not totally: I flew three bush trips, and was awarded of a success. In my xbox live account, all is fine, not erased. In FS2020, the progression show 100%, but the total say (for bush trips) : 0/10
To overide that, I reflew the las leg of each bush trip, and miracle , the counter now say 3/10 as expected. But of course, I’m far to the 50 hours of flight because this one is based on the logbook.

This bug make quite unplayable the Xbox version, as we are unsure if the logbook will no be lost one more time, soon or later

I also notice that the logbook record wrong things, especially when flying the bush trips. I have the Alaska bush trip in progress, and sometimes, it record nosense datas. Very weird!
When I finish a leg, the screen display the correct result (departure/arrival/fligh time as expected) - but , if i return to the main menu and take a look at the logbook, I see 00:00:00 as flighttime, and arrival airport is replaced by the departure.

There is defintely something very buggy in the logbook. 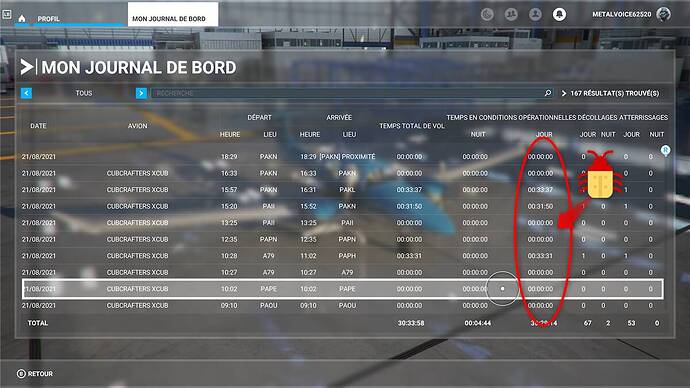 For the learning flights, I also get a counter of 0… but if I reflew the same lesson, and even get a “C”, it is recorded again as a “A” and counted.

Edit: don’t forget to VOTE for bugs (at the top of the page/topic) if you wan’t a chance to them solved.

There are terrible bugs in the way the logbook works on the Xbox version. I’m not the only one complaining about it, and it can have consequences on the number of hours of flights, the successes and it makes the gaming experience really deplorable

During bush trips the records are totally corrupted, sometimes it’s good, but often it records a flight with a duration of 00:00:00 and confuses the departure and arrival airports. It’s complete rubbish!

I want a reward

for having fly an UFO

Yes! my logbook contain an entry with an empty aircraft (should be the Xcub - I don’t install any other aircraft than the original premium edition). How is it possible ? 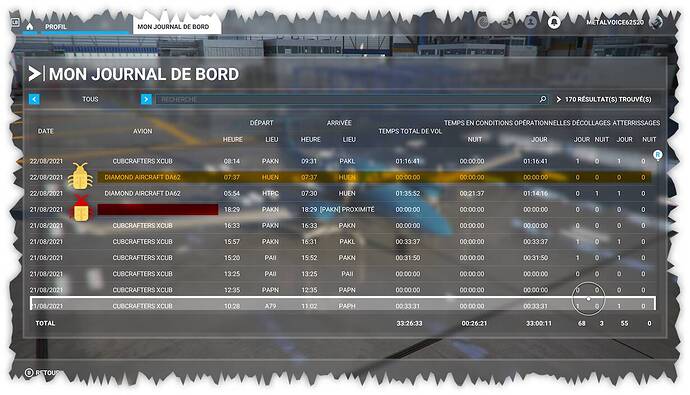 Yes what’s annoying is that the main flight hours stat and some achievements are based on the logbook (even though there’s a total flight seconds which seem to be working as intended). That makes some of these achievements basically unobtainable.