If I am going to fly somewhere and have issues with download speed during flight, I would like to just range an area and say “Cache at High / med / or low”

At the moment, in order to cache an area in High res, it would take me 20 mins to painstakingly highlight every little square

Take a look at what I mean, it’s not intuitive as is.

Any chance of an image or two? I am not able to begin my download for another 80 minutes.

I’m not sure if an image will explain.

Simply put, in order to specify that you want to cache HiRes, you have to zoom right in to an area and stay zoomed as you define the area. To cache a city, you would have to define hundreds and hundreds of tiles (select , scroll, select, scroll) rather than just taking a higher overview and selecting the large area and say “cache at HiRes”. The logic is skewed IMHO

In order to specify hires, you have to zoom in and stay zoomed in. The scale is controlled by how much you are zoomed in. You cannot select the scale directly.

I know they would be worried about data size, but they could simply warn the user that the selected region would generate XXXGB and let the user decide.

The manual cache saves to a separate file to the normal cache.

My plan was to specify a few areas that I want to retain in HiRes and not have to download them again (eg: DownTown Manhattan). The current design of the interface makes this a tedious task.

I Know, I Know, this could end up being 100’s of GBs but that is my choice, so long as the sim warns me so I can make choices as I define areas… 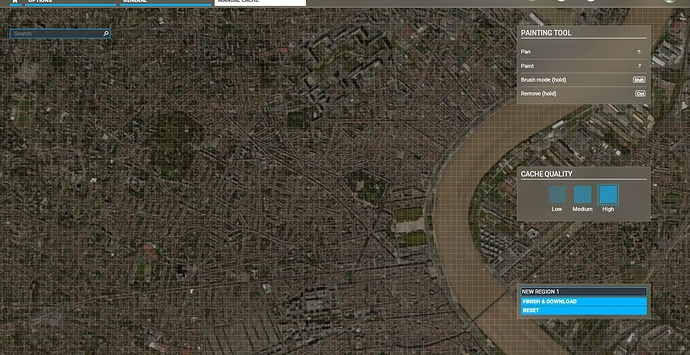 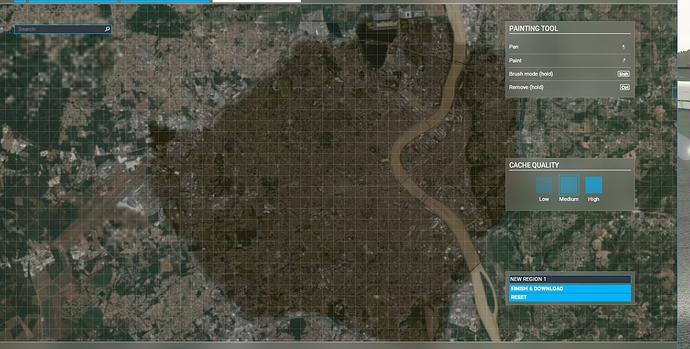 My plan was to specify a few areas that I want to retain in HiRes and not have to download them again.

But here’s the question… How often are you going to fly there? We’ve got the entire planet. I’ve been here since May and have hardly seen the same place twice in all that time.

The point is, that if I want to, the design of the tools makes it a tedious task. IMHO

I would prefer to draw a big square at a great height, and then zoom in to tidy it up (no need for hires of the ocean beyond the coastline etc)

Maybe I’m being too critical, it just seems like it could have been made easier.

Completely agreed, I was thinking they dont want people downloading too much of their data I dont know but agreed it makes no sense whatsoever

You can right click and drag to highlight a larger issue

Has anyone been able to select the ‘HIGH’ setting option for Manual Cache?

I’m unable at the moment. It does not ‘seem’ to be tied to general Graphics Settings. I have tried changing some options to high then checked Manual Cache again. No luck.

Not sure about reporting it yet as it may not be active, be tied to other factors, etc.

If it works please drop a hello here.

Try zooming into the map further. The qualities (high, medium, and low) are based on your zoom.

THANK YOU for the information on Hi-Rez! : raises coffee

How does this work? i selected all of ireland in low and its only 700kb??? 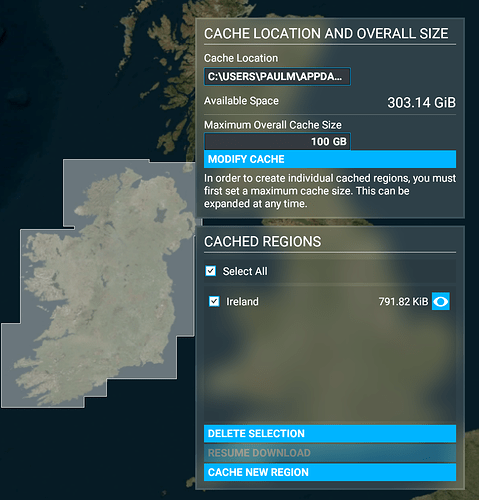 I’m Experiencing the same issue, High detail over all of manhattan, its only 9mb and when i load in theres no photogrammetry

And rolling cache keeps turning off everytime i restart the game

Make sure you press the save and apply button after making changes to your rolling cache. I cannot check at the moment, but I think it is F11

After updating my windows version to 2004, it now seems to download properly, this might also fix the issues I had been having with streaming photogrammetry.

In order to download at high res you need to zoom in. You’ll see the detail selector change to high res when you’ve zoomed in far enough, then you can start clicking and dragging to select the (smaller) squares you want in high res.

If you want all of Ireland in high res, for example, you’ll need to zoom right in and start highlighting…and moving the window around until you’ve managed to select every square in Ireland at high res.

If you just highlight all of Ireland while zoomed out then you’ve selected low res.

I know, it’s daft, but they’re French, wadda ya expect?

100% agree with this - just been trying to cache a city in high resolution and the select, scroll, select, scroll process to cache high quality scenery is really tedious, especially as the caching itself is quite prone to failure and then you have to recover it

Try zooming into the map further. The qualities (high, medium, and low) are based on your zoom.

The issue is you can only select tiny areas at a time on the map when doing this. So either you have tedious select, scroll, select… repeat ad infinitum, or you have to have loads and loads of regions which is also tedious. It would be easier if the map actually scrolled along with the selection, but it stays static and the selection runs off the screen which makes it impossible to manage.

Far better would be to allow to zoom to a desired area level, and then select the detail level you wish to cache. Even better would be to indicate the size of each of the low, medium and high detail versions so you can make an informed choice.

Those are some great suggestions. Would you be able to make a post in the #self-service:wishlist category outlining those ideas?