I had some major frame drops on descent and approach into Gatwick EGKK - excessive main thread.

Could be due to server issues.

Thanks. If I recall CPU was running around 17%, but I can definitely load up a graph of the cpu when I repeat the flight. It’s Ryzen9 5900x/RTX3080, 32 DDR4 3600. I’ve never seen FPS so low and I do this flight regularly. Once I hit the ground, my GPU was back to 100%, but still main thread limited. What gets me is that I expect a little lower performance on the ground at a complex airport, but this was in the air where I normally have the most fluid experience and highest fps. Overall, the performance was significantly reduced today. And, like mentioned, until today, I have never seem my GPU below 99 - 100%. The cpu is normally full out from the time I start FS until I shut it down. 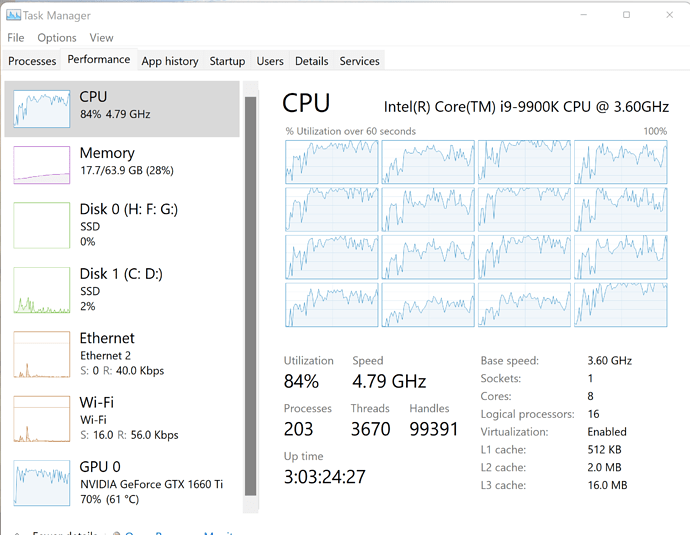 While sitting on Runway ready for takeoff: 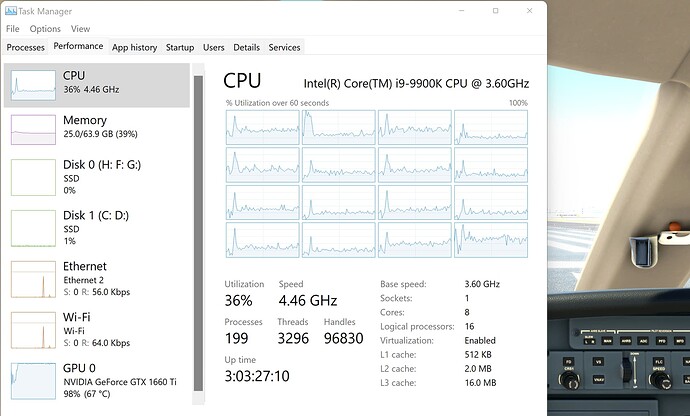 I wonder if it has anything to do with live weather. I had scattered clouds way below me in cruise (FL380)and fps was terrible. I switched to a full on thunderstorm (offline weather theme) and fps shot right up despite an insane amount of clouds, rain, lightning and thunder. I flew right down through it into a complex airport and photogrammetry area. Fps were high and rock solid.

Look at your ethernet and wifi connections in those shots, is the sim sending data out on both connections? Thats what it looks like the peaks seem to coincide on both adapters, disable the wifi connection and try it?

in this case your GPU is the limiting factor…

Don’t have cabled ethernet. Only WIFI.

It doesnt do that on my system, if Im using wifi, eth0 has no traffic and visa-versa.

Windows 11 shows Ethernet is not connected on my PC.

I don’t know why Task Manager shows that.

you need to find “Ethernet 2” ( not only “Ethernet” ) , thats the name of the adapter in taskmanager.

I found it under Win 11 Network Adapters.
This PC is WIFI only.
No Ethernet cable.

I disabled it. And everything still works okay, network wise.

I don’t know what it is and why it is there, TAP-Windows Adapter V9.
Default for Win 11 I assume. 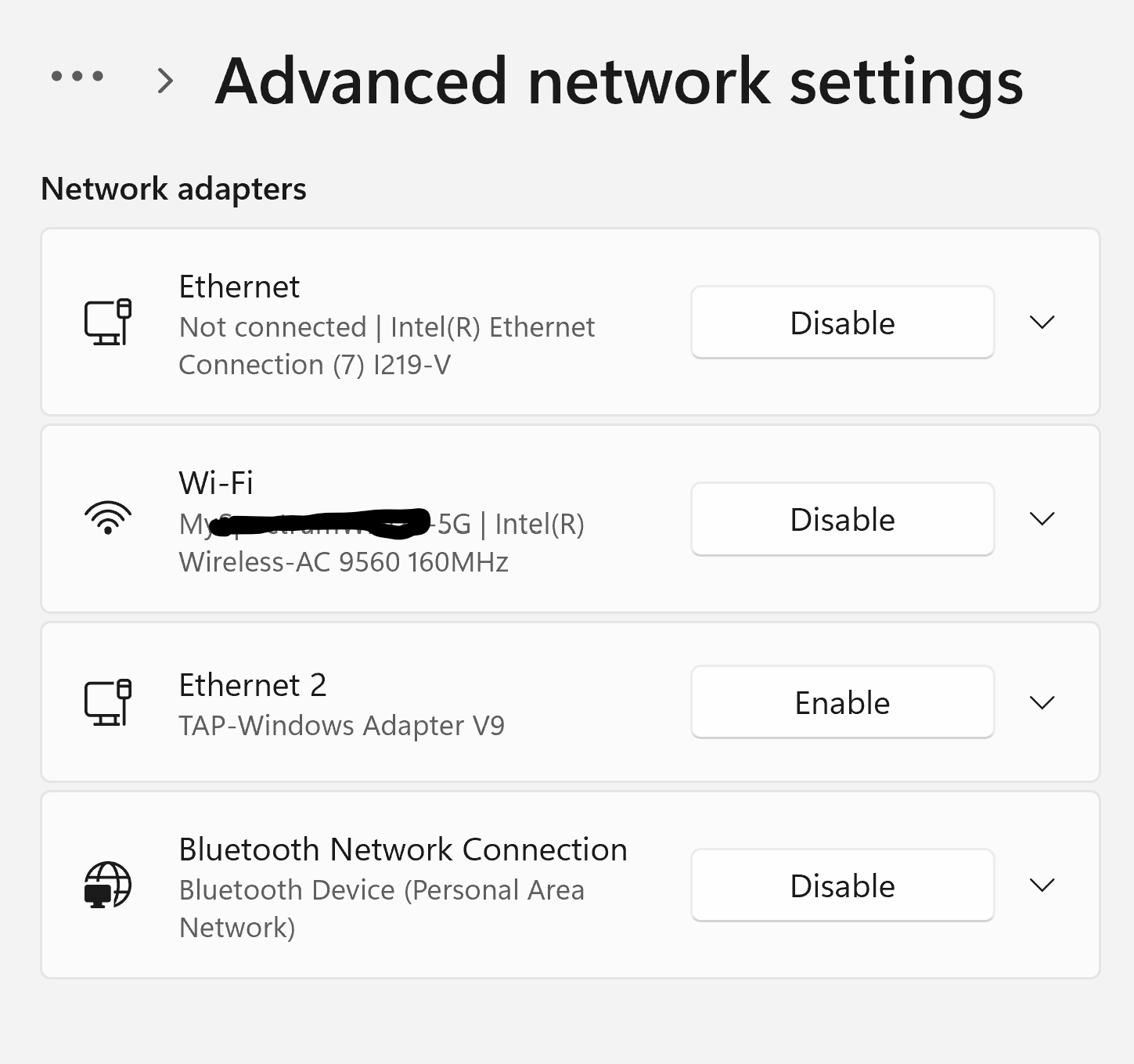 yep, Ethernet 2 is these TAP…

Thats a virtual adapter… may be from a VPN, or e.g. VM software like VirtualBox…

Correct, I turned my IPVanish VPN on and got this.

So, I enabled the network adapter in Windows Network Settings.

Yeah tap is vpn though why its labeled as an ethernet port and not you wlan port I dont kown … so nevermind ;p

I am experiencing a CPU spike with stutters always when flying in the south western Germany over to Basle/Zurich.

I made a video of it here: Youtube link

Anyone any idea what might cause those CPU spikes with stutters only down there in the area? I tried to remove already the sceneries but it did not help

Here is my latest experience…

After I climb out and level at altitude, my CPU utilization tanks, resulting in my GPU running at around 40%, sometimes dipping into the 30s. My CPU is barely working, so I don’t see how I would be ‘main thread limited’ - if I’m understanding what main thread limited is. If I pan around to look at the scenery it is very jerky, like micro stutters. It gives me a headache. Once I start to descend, the GPU gradually starts increasing, 50%, 60%, 70% etc, then landing at a complex airport with some significant weather the GPU goes up to 100% and it gets smooth again. It seems like the software does not know when to allow utilization of resources. This is a completely new phenomona…prior to this my GPU used to run at 100% from the time I started the sim until it closed down and the experience was always smooth.

I do not understand this. If I run a benchmark, all CPU cores and GPU will be at 100%. For some reason, FS won’t allow my CPU to run at higher values under certain circumstances like above, and this makes my GPU sit around on it’s hands waiting for stuff to render.

I spent a lot of money building this PC for FS. What was the point if it can’t use 2/3 of my computer resources? 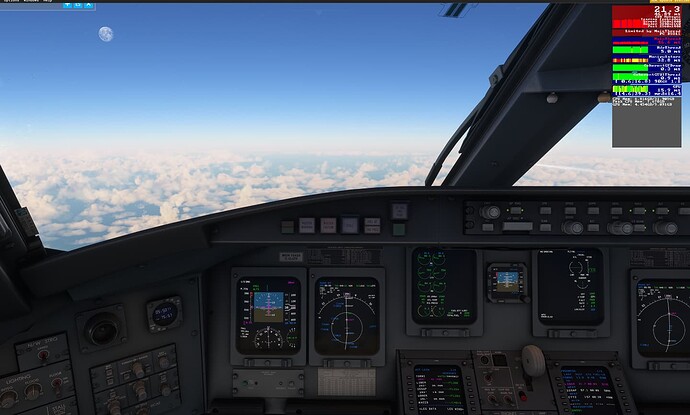 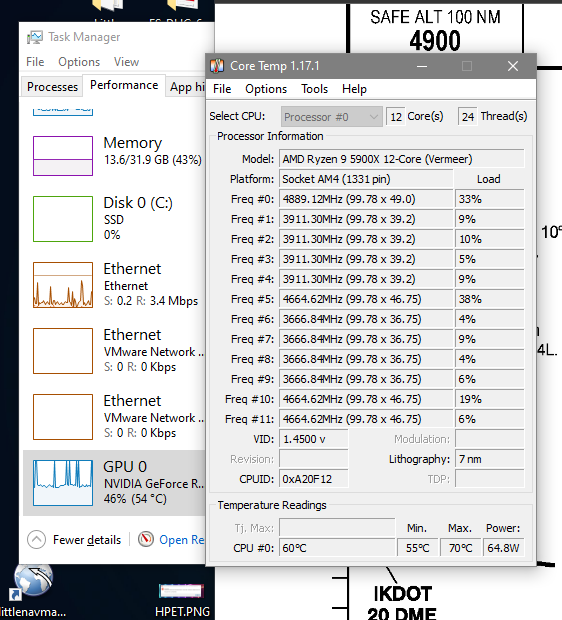 I dont know anymore, tried 3 flights this morning, restarting the sim each time, and each time plane spawns … 12 fps … sit on the runway for a min and it’ll will recover to 20 fps (where its locked), start the roll and it drops back to 12-15 fps made the turn toward destination, still sitting at 12-15. I even re-enabled ipv6 on the 3rd try and still no difference.

Quite frankly at this point in time I WANT MY KIDS MONEY BACK!!! If I cant use it and get reliable performance when I want to play then what the hell is the point…Oh but hey we’re going to get a bunch of new planes that we cant fly in Nov… that will fix it right?

My CPU is barely working, so I don’t see how I would be ‘main thread limited’

I suppose the main thread latency could get high if the CPU was often in a wait state, and therefore not running at max. Such a wait state could perhaps happen if a server-based resource took too long to load, which would support the widespread theory that many of the problems people see are related to slow or unreliable client-server communication.

Pure speculation on my part, mind you.

This seems to make sense to me in my limited understanding. When downloading updates, I often use a vpn as it’s considerably faster. I wonder if using a vpn when flying would help. I will try that on my next flight. I have a 1.5G ethernet connection. Could it be on the server side?
Thanks!