This seems to make sense to me in my limited understanding. When downloading updates, I often use a vpn as it’s considerably faster. I wonder if using a vpn when flying would help. I will try that on my next flight. I have a 1.5G ethernet connection. Could it be on the server side?
Thanks!

And as well it could also be that alot of people just dont know whats going on in the 1st place to come an report such issues. I remember back in the days when Al Gore invented the internet, most of my customers knew what they were doing, even when they didnt…

Prior to SU9, frame rates were buttery smooth. Since updating to SU9, I experience the following:
1) Run sim with no Flight Plan. Sim runs buttery smooth (Frame rates excellent).
2) Once I file and fly a Flight Plan, Frames Rates drop to between 2 - 3 FPS.
No difference otherwise, meaning I have not changed anything in my system or the sim. I have no add-ons.

This is just ridiculous I had this problem earlier in my flight sim experience with Microsoft, but they were able to fix it somehow or something happened. As someone who like to take long flights this really is starting to ■■■■ me off. Pardon my French. My first flight crashed as I was landing (didn’t think much about it) tried to continue with my next flight then halfway through the frames dropped to 2-10 fps (ok something is up) was able to exit and continue, and not even 5 minutes later the sim crashed again before I could even put my flight plan into the MCDU. So, I tried again and was able to finish. My last flight not even 2 hours in the fps got lower than 1. I have never seen this in my life. I had a connection issue (that is a different issue) and as I tried to click the ok prompt it took the sim nearly 10 minutes to register that click. Absolutely insane. Microsoft really needs to figure something out here. It can’t keep happening.
PS. Sorry if this comes across wrong but I just can’t take this anymore I would have thought Microsoft would figure something out. I also get that this is just a few days after the update too. The problem is it is an issue that is inconsistent when it pops up. I have also been flying with MSFS2020 since November of 2020 so I am aware of all the issues in the past.

I have a solution for the massive FPS drops - maybe it works for other users. When I plugged in the VR (Oculus Rift 2) I found out, that the performance in VR is much better (now FPS-Drops) - then I switched to the PC-Mode an it also works without drops and stutters. Dont know why - but it works for me, hopefully also for other Users.

everywhere, everytime i got main thread limit, and lows gpu usage, and after update9 i got full gpu usage everywhere and everytime, with much more less ms in mainthead… if a put down FS config won´t also help… its like we have a constant and steady limitation no matter what we do.

This is exactly what I’ve been dealing with. Buttery smooth, other than the frame drop to mid 20s on what seems like a regular interval. Are you on laptop by chance?

After I climb out and level at altitude, my CPU utilization tanks, resulting in my GPU running at around 40%, sometimes dipping into the 30s. My CPU is barely working, so I don’t see how I would be ‘main thread limited’ - if I’m understanding what main thread limited is. If I pan around to look at the scenery it is very jerky, like micro stutters. It gives me a headache. Once I start to descend, the GPU gradually starts increasing, 50%, 60%, 70% etc, then landing at a complex airport with some significant weather the GPU goes up to 100% and it gets smooth again. It seems like the software does not know when to allow utilization of resources. This is a completely new phenomona…prior to this my GPU used to run at 100% from the time I started the sim until it closed down and the experience was always smooth.

I do not understand this. If I run a benchmark, all CPU cores and GPU will be at 100%. For some reason, FS won’t allow my CPU to run at higher values under certain circumstances like above, and this makes my GPU sit around on it’s hands waiting for stuff to render.

I spent a lot of money building this PC for FS. What was the point if it can’t use 2/3 of my computer resources?

I’m looking for the same, but the amazing thing is that my problem occurs unlike yours.

When I’m on the ground, my CPU and GPU are using less than 20%, after taking off and gaining altitude some time later the performance abruptly returns to normal.

Clearly my MSFS is not managing the hardware as it should for some reason. 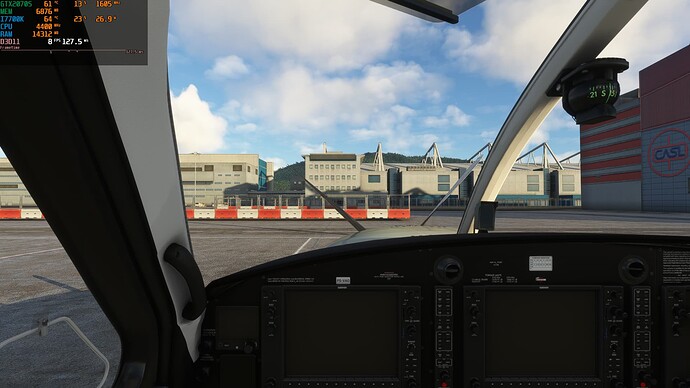 Another thing that happens is that when this drop in FPS happens on the ground and I try to go back to the menu, even the loading to go back is hampered due to the low FPS taking several minutes to load. 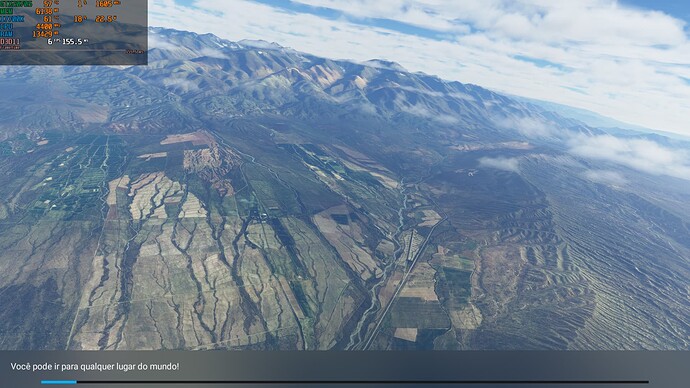 The funny thing is that when I arrive at a destination everything is running normally, when I put it to load in the same place (in this case as the source) it starts limiting my CPU and GPU

So I don’t believe it’s the location, much less something on my PC, but something with MSFS that is not managing the hardware well

Main thread limited means that one part of your cpu (not the average usage across all cores…open up the task manager view to show all cores/threads) is hammered at 100% usage and is bottlenecking the entire sim. It happens because MSFS is so poorly optimized to spread the workload across multiple cores. Many games are like this but it is particularly bad in MSFS. Dx12 that is hopefully coming with SU10 will help as that functionality spreads more of the cpu workload across more cores and will theoretically reduce the bottlenecking main thread limited spikes we see if you have graphics and other sim settings too high for the hardware. Also, the studdering you see is the GPU waiting around for the cpu to catch up when it is limited on a single core….that’s why the GPU can be at 30% usage but you have studdering in the image. I have my GPU running at 100% in VR constantly and no studders at all unless I have the sim settings turned up too high and the cpu main thread limited warning comes up (at that moment is when the image studders, or if there is a problem with the servers sending the data like on days where the sim is updated and many users are playing and downloading).

I hope they are going to fix all of these performance issues which are causing MainThread hammered soon. It’s important to remind these issues are caused by MSFS itself and are not related to user’s hardware, 3rd party addons,…

Also I do really hope they are going to fix current performance issues, not just adding some optimizations to mask major issues.

Thanks for the detailed explanation. Something changed in the way resources are managed in my case. My GPU used to run at 100% from the time I launched the game, until I closed it. Most recently my GPU will fluctuate between 85 - 100% on the ground at an airport (for example Fly Tampa’s CYYZ and KBOS). Once I am airborne, the GPU starts to slow down and when at cruise altitude it typically drops int the 40 - 60% range. I am constantly monitoring both my GPU (with Task Manager) and all my CPU cores (with CoreTemp). I have never seen any core of my CPU exceed 35 - 50%. When the FPS drops and I get the main thread limited, my CPU cores are barely working - normally the core that is working the most is around 33 - 40%. So something is commanding the CPU to increaase output on the ground - presumeably the complexity of the scene to be rendered. And, something is telling the CPU to throttle back after takeoff. Neither my CPU cores or GPU are breaking a sweat at cruise altitude and that’s when I am mostly “main thread limited” and FPS tanks. If I start descending through clouds, my GPU with start to increase output. Despite the “main thread limited” warnings, not one CPU core is even close to running at over 50%. One core will run like that and the others in the teens and single digits.

Thank you. That was exactly my concern, even more as any official statement on this ground FPS drop issue has been missing so far.

We should very carefully check upon release of the first beta alreday if signs of this impediment (main thread exhaustion, jump of fps upon leaving the runway…) are still in place.

Problem is that if a fix isn’t in the change log, it doesn’t matter to them if the new version breaks something. The tests are “what’s in the release note” not regression testing, and unless the push causes instant CTD for all users it’s “oh well, next update will fix that”….

This will actually be the first time I will join a Beta. I really hope they are able to recover the performance we had during SU 7.

Any idea when beta will be out ?

Probably mid to late July based on comments from Jorg’s interviews.

ok thanks, did good uninstalling then.

absolutely the same observation- sim is buggy as hell