Between 10/29/20 and 12/08/20 The Mooney Ovation had multiple crashes to the desktop when interacting with basic systems. Buyer beware. Asobo makes major version/breaking changes to core APIs, and Carenado is not responding to those changes. There appears to be no clearly-communicated SLA from either company, and in this case it took over a month to fix.

I purchased the Mooney M20R from the marketplace and I have some information about it.

The Mooney is the only aircraft in the game with all of the following:

The Mooney uses Steam Gauges, not the G1000: 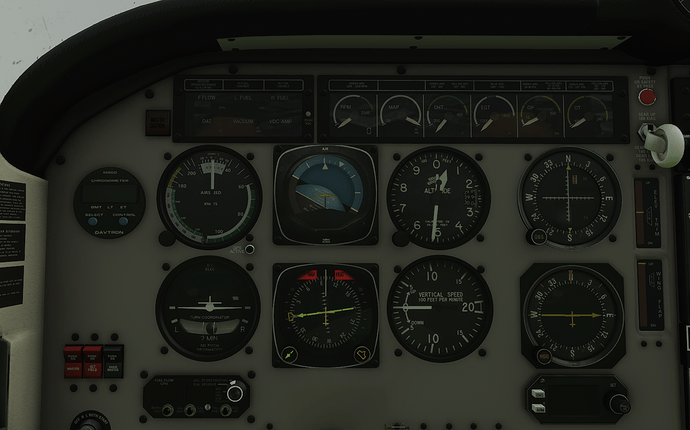 The Mooney has a Throttle/Prop/Mixture lever setup: 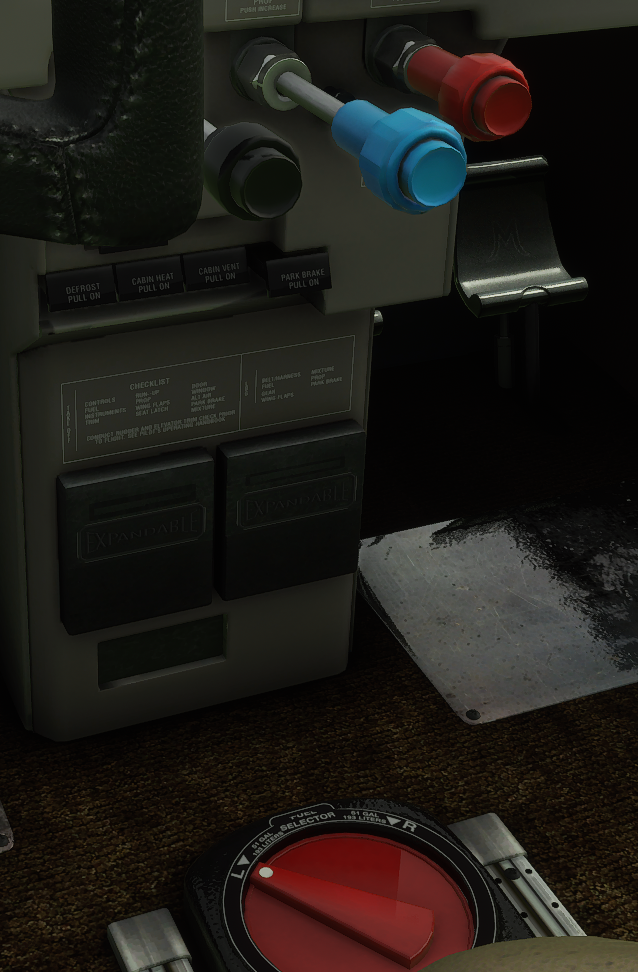 The mixture affects the cylinder head temperature and the engine gas temperature as expected. The throttle affects the manifold pressure and the prop affects the RPM, similar to in other aircraft with these 3 levers. The gauges all appear to work correctly. If you start on the runway at an airport with a high altitude, you will need to quickly set the mixture or your engine will stop. 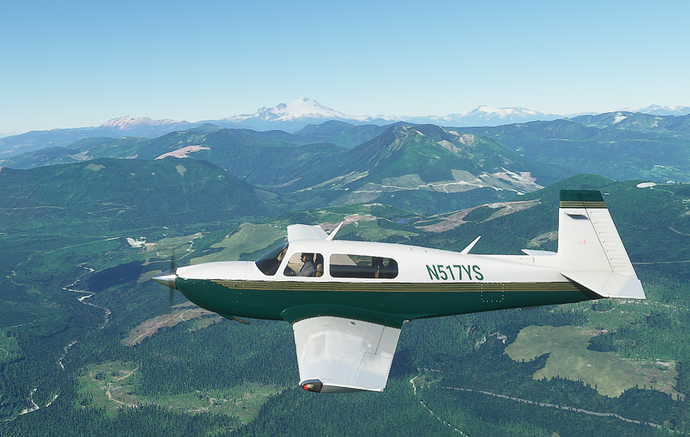 The landing gear can be retracted. The single engine is quite powerful and the aircraft can climb and travel very quickly! It has 3 levels of flaps and it handles quite well when controlled by hand. 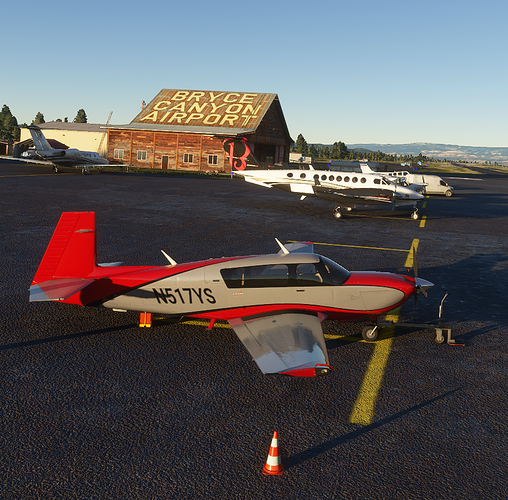 The aircraft can display static elements when parked. These are controlled from an iPad accessible by clicking the yoke. 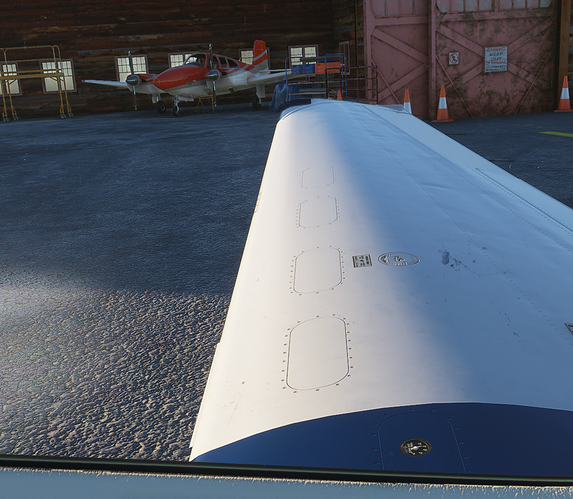 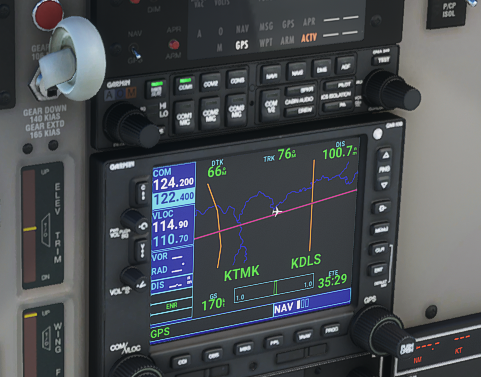 The auto-pilot oscillation seems to have been fixed as well, at least when I tested it. 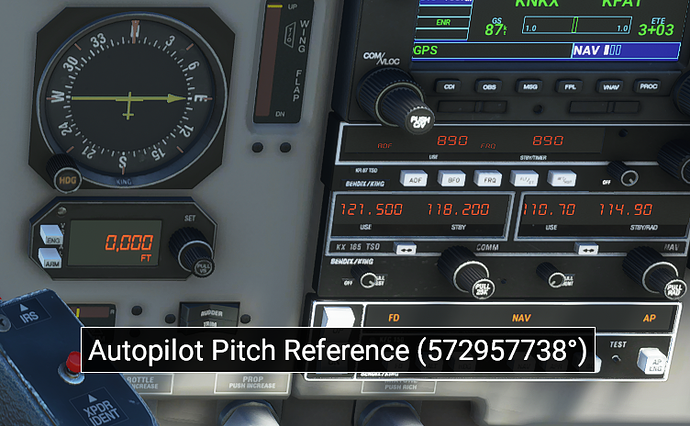 The barometer adjustment appears to be far too sensitive. You it jumps around 3-5 when you just barely click the control.

On this same theme, the trim is also extremely sensitive, setting a trim to a value between 0.0 and 0.1 (just clicking the trim button on my stick a few times) causes the aircraft to fly into a near vertical climb and stall out.

When talking to ATC just after takeoff on a direct VFR flight (Request Flight Following) the “type” of the aircraft is just a blank, so it reads “is type ,” whereas it should be “is type Mooney,” 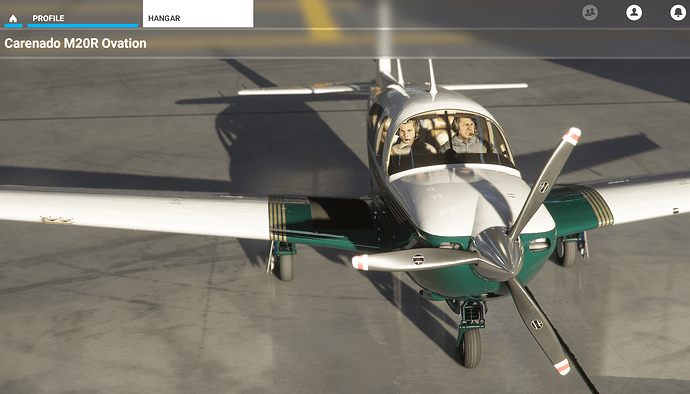 Conclusion
After the update to version 1.1, this aircraft is pretty much my go-to aircraft. 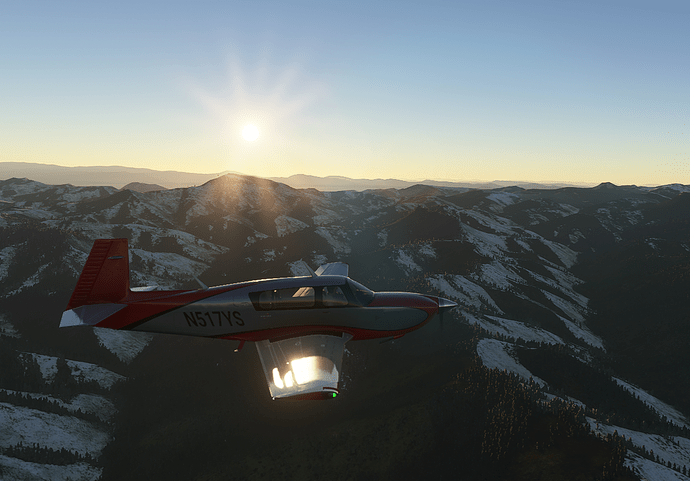 I believe the issue with the avionics is a sim issue and not the Mooney. Similar issues are plaguing default aircraft as well, it just seems to be unrecoverable in the Mooney.

Hello good sir and thank you for informations.

Do you possess c182t ? Is there any fps difference from that plane or default ones?

Can you move freely with camera , even through windows ?

I can move through windows with the camera, yes. The FPS is perfectly fine in the cabin, as far as I can tell, but I do not have the C182T.

Thanks for the speedy review! I promised myself I wouldn’t spend a fortune on add-ons for FS2020 but I fear that promise has already gone down the tubes! I really liked the x-plane version, and it’s perfect for VFR cross countries. And oh look, it’s the weekend…

The Mooney is quickly my favorite aircraft here. I can confirm though that the autopilot oscillates badly left and right of the NAV autopilot course. And we’re also confirming why the “default” gns 530 really needs to be better because many aircraft will use it.

Is the GNS530 and other radios turning off and refusing to turn back on after 5 or 10 minutes a bug across all GA aircraft right now?

No, when the avionics are dead it’s because they start dead when loading onto the runway or they never turn on when doing a cold dark start.

Appreciate the review. I’ll be keeping an eye on this one & buying if I see a proper patch for it.

I wonder if it’s possible to have the check list in the plane’s ipad. Does anyone know?

The auto-pilot oscillates to the left and right and can’t hold a straight heading when in Nav mode.

Probably my biggest gripe with this addon so far. The sounds are beautiful and it flies well IMHO. Aside from the icing immunity and AP chasing the line constantly, it’s not bad. Is it worth $30? Probably not. Am I having fun flying it? Yep.

Didn’t they say there was like 100 third party developers or addons ready to go. Will each one of them be incomplete. Thank you for posting and being the tester for people before they buy. Spending money on broken stuff is a tough sell. Unless you love the Mooney.

For me all the avionics worked on a cold start, they just failed after a few minutes.

And it seems like all the payware aircraft so far were plagued with rather trivial issues on relase - in a way that makes you ask yourself “couldn’t they really spend another day or two fixing this before pushing that out the door at this price tag?”

I have also purchased the Mooney and have to say that I really like it. The avionics issue is a real pain but I am sure it will be rectified. I too have issues with the cockpit quick views using the hat on a Honeycomb yoke but the Cessna 182t had the same issue and was rectified by Carenado within a week or two via patch.

All in all, I think this will be right up there on may favourite airframe list.

are you kidding me?
So the same caveat like with 182t

Haven’t seen the avionics issue with either a cold & dark start or starting on the runway. It’s been fine for me so far. ( Using the Honeycomb switches to run through start up and making sure they’re synced with the aircraft. Caught the prop lever not initializing to what my throttle quad is physically set at )

The new low RPM effect seems over the top - esp when you’re on final. Shouldn’t this just be triggered when you’re at the lowest idle? ( ie shut down and idle check during run up ) The plane rocks visibly when you’re in 3rd P on the ground… sorta amusing… but also, not.

Annoyingly, flying the Mooney doesn’t seem to credit your flight hours or show up in your logbook at all. I already bug’d it - but is anyone else seeing this issue?

Otherwise, really enjoying it… have had it for P3D and XP11 and glad to have it here.