MS Store -Explanation why it fails so many times

Really sick and tired of MS Store. Purchase this way , was a mistake. At least once a week, opening MSFS takes me to the bloody store to gaming services that reveals nothing. To fix, I have to sign out of the store , sign out of windows, restart, and re sign into both.
What is the reason it does this? Any windows experts?
Dont bother sending a ticket to zendesk for this. They will refer you to MS Store support which is canned repeated replies.
If I know the reason for this constant annoying recurrence, then perhaps I can have a more permanent fix.

I think what I’m gathering from this is that the MS Store platform for MSFS is more troublesome than the Steam platform?

I think that’s worth a Zendesk ticket. Or at least an MS Store issue report.

I bought through the store and had none of these issues. Feels like there must be some issue with your xbox or MS account that needs to get fixed

I second this opinion. But, I’m at a loss to offer any help. It works well for me, and never prompts me as you outline. I’ll be curious to see if anyone else has this issue, and if there is a solid fix.

Best of luck… it’s frustrating when things don’t work as you expect.

I got it to work by loading MSFS but do NOT run as administrator. Then when you shop at the marketplace it asks you for your sign in and works. Later go back as administrator and open content and you can download and install the product you bought.

Yes, there do seem to be lots of apps here that need to be connected properly - xbox app, conpanion app, store etc - most of it not very intuitive

Try and reset the ms store with wsreset in your run command.

The issue with using the MS Store is that there are a lot of moving parts that need to all be working right in order for everything to go smoothly. You need to be signed in with Windows, the XBox app, the companion app, the MS Store, and then MSFS itself all with the same account. Each of these are talking to different services and servers along the way. If you happen to have other Live / Hotmail / Office365 accounts (for work / school), that can also cause conflict with your sign-in to any of these services.

If any of these aren’t logged in or working properly for whatever reason, you’re likely to encounter problems along the way. That’s a lot of potential points of failure. I really dislike how fragmented the whole MS Store and XBox services are. Most of the time, it works as intended. And for people who are tech savvy and know their way around their services, this generally isn’t an issue when a problem pops up. But to tech-illiterate Bob who just wants to fly his plane around, this can be an almost insurmountable obstacle, each requiring a different helpdesk / support system to talk to for each service not working. Never mind the nightmare of trying to figure out WHO you need to contact,

Steam does make it much easier by unifying all this stuff. You have 1 Steam login. Then you use your MS account in the sim. Done.

Steam hogs more resources though (up to half a GB of memory in SteamWebHelpers) and will block connection to the Azure servers if you run Steam in offline mode. Also never verify files on Steam, that will trigger a full re-download of the game.

Windows store has been hit and miss for me and I have had to reset the store a couple times. Sometimes it works, sometimes it simply refuses to install or update. I had a trial for GP for a month, some stuff downloaded, other stuff just would not. Random.

Steam hogs more resources though (up to half a GB of memory in SteamWebHelpers) and will block connection to the Azure servers if you run Steam in offline mode. Also never verify files on Steam, that will trigger a full re-download of the game.

Most of this is due to MS and they way they have their fragmented systems and processes set up. Steam works extremely well with pretty much any other game. When it doesn’t, it’s typically because the game itself has these extra fragmented layers built in. When it comes to verification, Steam does exactly what it’s intended to do - resets the game to its factory settings. With every other game this works great. Unfortunately for us with MSFS, “factory settings” means a default launcher install minus content. Again, this is an issue of MSFS and its fragmented services and systems vs a Steam issue.

The memory thing is on Steam. But unless you’re running a potato with 8GB, 500 MB of RAM is not really a big deal, particularly if it ends up getting paged out to your virtual memory anyway. It’s not like you use Steam while using MSFS. Crack Chrome open in another monitor with a couple of active tabs and it will make that 500MB Steam uses look like peanuts. lol

Thanks for the ideas. Yea done all kinds of MS store fixes. Its own troubleshooter says theres nothing wrong. Reset, reinstall, clearing cache , some more advanced powershell commands. Fixes for a week or so, then back to gaming services on launch again. But if some of you are not getting this at all, then that confirms its on my end.
Thanks

Yeah it’s not that much, but every bit helps while waiting for a memory upgrade to arrive. Last night it crashed again (16GB physical ram, 25GB page file). The problem is, it’s doing stuff in the background, causing hard faults, hence I wanted to set Steam to offline mode. Yet who knows what the windows store does in the background (I set that not to start, removed from background apps)

Anyway this is with Steam, flying over Madrid 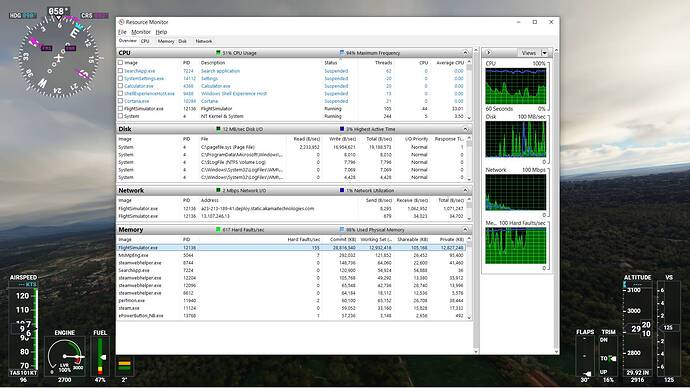 Not sure what Steam and windows defender (msmpeng) are doing. I’ve excluded flightsimulator.exe from windows defender, but it’s still doing stuff, probably scanning whatever Steam is doing.

A small miracle it runs with 16GB physical ram!

Hi there, How do you get to rescores manager?

Ok thank you very much.

A small miracle it runs with 16GB physical ram!

Indeed. 16GB is really the base minimum you need even for just a basic Windows setup these days if you do anything but light day to day stuff like browsing, media consumption, light productivity. 32GB is what you want if you’re doing any heavier work or gaming.

I’ve currently got 32GB, and should have another 32GB arriving from Amazon tomorrow. I should be set for a few years. At least until it comes time to replace my current PC.

A choice between the lesser of two…

Steam forcing a complete re-download is less hazardous for folks who have a relatively clean Windows install, no overclocking of components and reliable, fast internet. I’ll take that over having to troubleshoot up to five points of failed authentication.

Ditto. I hate how fragmented gaming is with all these publishers having their own games store apps now. None of them can touch the complete package that Steam offers. Particularly the MS Store while is a dumpster fire as far as I’m concerned. It’s gotten better in the last few years, but it’s still pretty bad compared to all the others.

Typically, if it’s not on Steam, I don’t buy it. It has to be something I REALLY want in order to stray from Steam. That way, all my stuff is in 1 place, protected by 1 login with 1 2-factor auth system.

Actually it would appear the vast majority of users in either steam or MS store usually dont have problems. One thing we have to realise a lot of people come here when they have problems so it may appear many more people have problems than is possibly true.

Its no comfort for those who have problems though, so i do feel for you, but i find generally if you keep to “standard” as much as possible, install paths, no overclockign software, etc, you tend to have a better experience.

Agreed, however, you CAN reduce the footprint significantly by switching off the steam overlay… BUT… it will prevent certain things, like complete a purchase formt he Market Place. I found this out the hard way, I wanted to buy the Mooney, and it woudl never complete. Raised a ticket on zendesk (little embaressing, as i am a developer, and the one that tends to HELP people here!) who replied to tell me to turn on the Steam Overlay! Doh! But thank you Zendesk for that fast reply!

Also never verify files on Steam, that will trigger a full re-download of the game.

You know, I am sure it happens to people, and i myself have in the past warned peopel NOT to verify files,despite me not witnessing this happening. Then one day i WANTED to wipe MSFS from my computer and do a clean install for the winter update… so I clicked verify files… and guess what… nothing… it didnt delete anythign, the update came through as normal, everything, remained. Even more embaressing, I was live streamign to some friends, to show the Steam delting all files… and egg on my face!

So yeah, the deleting of files may only be in certain cases, maybe a non standard install perhaps? But I can tell you it does always 100% delete files!

I hear you… i still have my FSX Deluxe edition box! miss those days!

You are not the only one, I can’t tell you how many times I went through MS mess, so I decided to dump MS altogether and purchase from the Steam store.