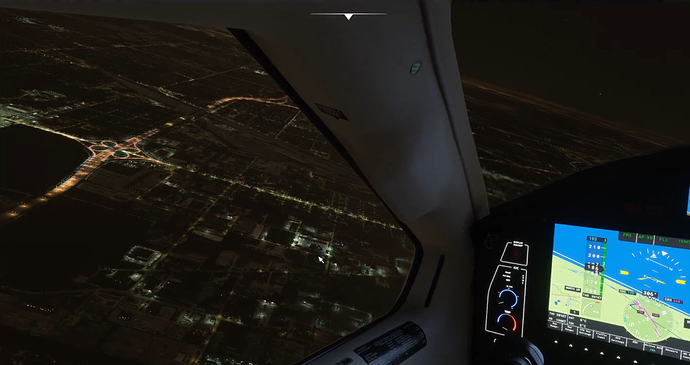 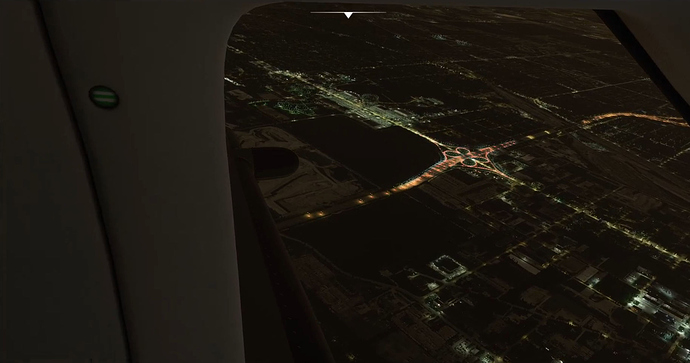 While there are definitely issues with MSFS 2020, I can’t deny that it has revolutionized
the flight simulator experience already, in so many ways. One example is night flying.

I’m dating myself but I remember when FS98 came out and was, back then, a really big
deal. Then FS2000 (which had its own big issues), and so on and so forth. I can’t recall
a single full night flight I’ve made on FS since then, because the night environment that
was modelled was–well, too off the mark to overlook ( and there were lots of things one
had to just live with in ye olden days of flight simulation).

A lot has been made–justifiably–of FS2020’s jaw dropping advances in the depiction of
scenery, terrain, elevation, landmarks, etc. But I must also give a shoutout to the night
environment it depicts, which is even better in a lot of ways. I recently did a night flight
from KGYY to KDBQ, part of which is shown in the two screenshots. Seriously, I doubt
that there are many people who could distinguish it from real life.

Also just breathtaking was the way that the lights of the Chicago metropolitan area gave
way to an almost pitch black sky and horizon as I progressed west, with the lights of a
few small towns or towers below. Just amazing. Now, I actually want to do more
night flights, which I never even considered in previous FS versions, or P3D
before Envshade.

I went through some days of real frustration in setting up my peripherals, finding a way
around the present limitations of the generic aircraft, but I have to say it was worth it.
All the more as the software matures and they fix the weather issues (I experienced
quite a few, that I’ll summarize in another post), and we get the study level aircraft
for FS2020 that PMDG, Leonardo, FSLabs, etc., are working on. Once that happens
I worry that I’ll never leave my computer.

Couldn’t agree more. Sorry for the people that are having problems but they’ll figure it out (Asobos).