MSFS normal maps, how are you making them from height maps?

This somehow sparked my interest so I looked deeper. In my project, I’m creating normal maps from height maps like you, so the initial normal map looks purple. The blue channel is white. The SDK build converts the textures to DDS. If I open these, the blue channel is black and the image is flipped in the Y or vertical direction. That’s the only differences I can detect just by looking at them.

I still believe that the blue channel is irrelevant here. The Y flip is the big deal though as obviously the normal map won’t work at all without that. The subtle thing to look for is the direction of the normals in the sim. Are the raised parts raised and the sunken parts sunken or vice versa.

An interesting aside is that in Blender, my normal maps look reversed but in the sim look correct. I haven’t dug deeper into that since everything works, but there are some mysteries.

Any new info in this toppic?

Struggling with the same problem, trying to edit _NRM.dds to remove som rivets on an aircraft texture.
(Serched and failing by trying for ever now… Sorry if this is solved elsewere, not even sure what to search @

Normally, you wouldn’t try to directly edit the normal texture, but if the area around the rivets is otherwise flat, you may be able to remove the rivets and not mess anything else up.

Firstly, you’ll need to convert the .dds file to .png to edit. ModelconverterX is the right tool for this. When you have a PNG file, paint over the rivets with a color that is 50% red, 50% green and 100% blue.

Then, use ModelconverterX to convert it back to the MSFS .dds texture.

The discussion above talks about two different “styles” of normal map where the blue channel is either 100% or 0%. This may not be an issue for you, but if you do see a problem after testing the new normal map, then try to paint out the rivets with a color that is 50% red, 50% green and 0% blue.

No problem to edit the rivets, the surface is flat, My main problem is that i cant save the normal map file wo corupting it…
If i open it it Gimp, or PS and saves/export it, withouth any editing to it, its not working corectly right there… Making a disorted lightning on the surface ingame.

Think ive tried every option inside Nvidia tool and in gimp wo succes.
The thing is the original file looks as Dyanear described it, w Red Gren Blue channel . Blue is all blaked out, and both red and green chanels are only low res black and grey, easier to show with a picture ( green chanel, red looks thesame but one is horisontsal and the other vertical ) 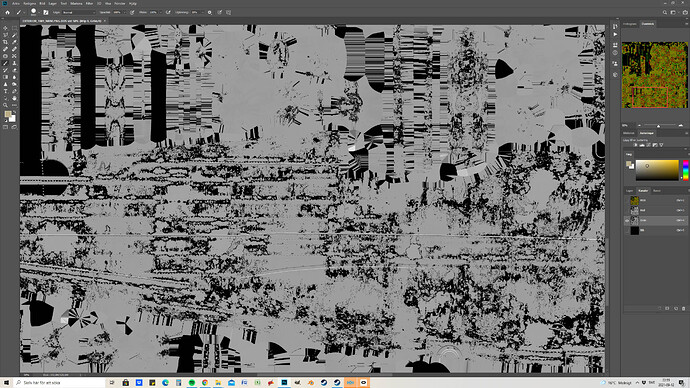 The thing is, i can create a whole new normal map fron Ps, via Nvidia tool, in the common purple style, from this file, and its useble in sim. But do to the extreamly ruff edges (black and grey, nothing in between) its make the fuselage looks lika a crash derby car

So if nothing else i have to do the whole bumpmap from scratch. I was looking to edit a very small place inside the original file and cary on with my life, but it seems inpossible?

(Storry is, Ive made a livery for a Spitfire, showing the Pr (reconnaissance) version with cameras mounted inside a hatch behind the cockpit, that hatch is covered in rivvets, and i want it flat as there is a small circular window for the camera there)

Also tried to convert the file in Modelconverter… It looks thesame but ill guess blue channel is inverted to white instead?

Its frustrating how such a small problem, can irritate so much…

Ill guess no one would think twice about those rivets, but i want them gone! 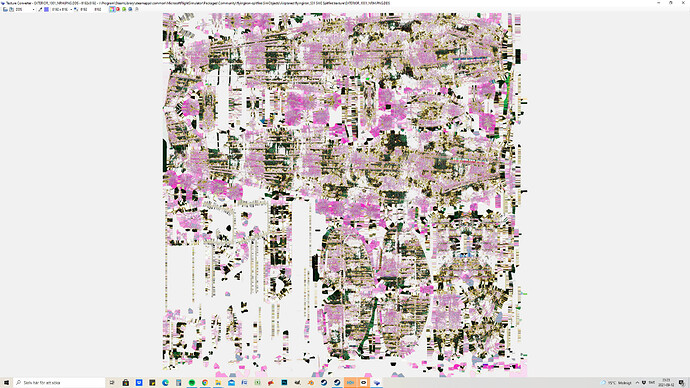 Wow, that is a complicated normal map. I can’t figure out what all the black spots are doing. It’s almost like that is intended for some other data or is a strange corruption. You can see the panel lines and rivets because they are the only thing that isn’t black or 50% gray.

I bet you could use a curves transform on that to keep the black, bring the light gray up to 50% and take the highlights down to 50% also. It will remove the panels lines also.

I can see how it’s much more difficult to work with this file than one you create yourself.

Im affraid yore right on that…

My first thought was that is was somw fileprotection or simmilar, but why protect the norm bumpfiles when all other texture files is easier to work with then before… That doesnt make sence…
All norm files ive locked att loocks like this… But all 3d party addonmaker would know how to create these files, but i cant find anything anywhere… Not sure what to look for, as i said tho

Well, ill might get the time someday to make a bumpfile from scratch then, for now it seem as the only solution, Thanks for your time and effort