Either the 3700x is really giving less perf than the 9700K in my test system, or you’ve missed a few settings items. For example @Arctic2660 is having a totally different experience (positively) in using the same NVidia driver and disabling SMT (HT in Intel world).

As an example, with the settings I’ve posted, I can run the K350 over Hawaii in MP (quite crowded over there) with WMR OpenXR SS 65 + Motion Repro and TAA 60 or 70 depending, all this in nearly constant 90Hz/30fps without stutters for the most part.

Speaking of the glass cockpit, I’m advising doing the contrary to eliminate stutters (at least reduce most of those induced by the glass cockpit). Please follow the link I’ve posted about this in the OP. However should you reduce glass refresh rate, you’ll probably gain a few more fps and/or room for something else but with more stuttering.

The main setting affecting the most the stuttering during turn and fps in general is Terrain LOD. The 2nd one affecting the most the fps in general is clouds. This is why I’ve set a base settings combo which should be really fine in most areas with most aircraft, and you can from there raise terrain/cloud first if you have room, and afterward the others if you still have room. With only 2 sliders to adjust from time to time during a flight for example it makes it easy to fly 95% of the time and adjust on the few occasion it might be needed.

The baseline settings are beyond excellent. For those wishing to resolve stutter and have a super smooth VR experience, for the sim, in its current state, if you own a G2, this is the definitive guide to get up and running.
I did not invoke an fps counter, nor was it required. The VR with these settings simply works, magically.

Thank you again for your dedication !

PCI USB card can be had for $20, and I had to use it for G2 to be recognized, AND set all PCI to GEN3 in BIOS to eliminate blue screens and audio dropouts. I’m afraid the only way to eliminate this very probable issue is to do both. Or you can try a powered USB 3.0 hub. It has other uses too. I bought it as well, just in case.

Just bought a G2 tonight and then found this topic. This will be a life saver as I have the exact same system specs except for a 10700k instead of a 9700k.

Thanks for the time and effort put into testing this and then documenting it for everyone. I’ll definitely be checking back here next week when the G2 arrives.

One thing I’ve read at reddit and I’ve tried out at the beginning when I was getting some failures with the G2 and the USB, was reversing the G2 USB-C plug by 180deg. This connector type has no specific orientation but it seems the G2 one only has pins on 1 side, and it could be causing false contacts.

The first day I’ve got the G2 I’ve used the USB-C connected on the motherboard and it was immediately working, but shortly afterward I was getting the typical G2 detection errors. I’ve ended up using the USB-C to USB-A adaptor and with this, there was one orientation of the USB-C cable from the G2 working reliably, and the other orientation causing sometimes the detection errors.

Alright, I’ve been at this for days now, and I’m very happy with things and thought I’d do a data dump which may be useful for people with similar specs.

Everything else default
VSYNC OFF in drivers and FS2020 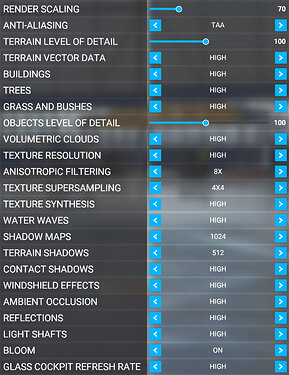 Since this thread is heavy on theory, I wanted to make the first part my tl;dr and then let people dive into my ramblings if they want to.

My lightbulb moment centered around motion reprojection. Once I got this nailed down, I went from “I guess this’ll work for lessons” to “I just want to fly all weekend”. In a way, reprojection makes tweaking FS2020 for VR a very simple, binary experience. Basically, with reprojection enabled, VR either works or it doesn’t. You can kind of stop paying attention to what your framerate is.

Reprojection has a fairly significant cost (though totally worth it in my opinion), and if you don’t know this and/or don’t know how to verify if it’s working properly or not, you’re gonna have a bad time.

There’s a setting in the OpenXR Developer Tools, Display frame timing overlay. If you tick this checkbox, you should see a box in the middle of your left eye next time you’re in FS2020 VR. The box will either blue or red. If it’s blue, reprojection is working. If it’s red, it’s not working, at least not optimally. You’ll notice it shows the reprojection frame time, and for me it was like 3.5ms.

With a headset running at 90 Hz and reprojection capable of inserting 2 frames, 30 FPS is the magic number, which will be obvious to anyone who’s spent any time sifting through this thread. The 3.5ms is over 10% of your frametime budget, so you have to stop paying attention to FPS numbers and start focusing on whether or not your reprojection is working by looking at the color of the frame timing overlay.

In-game graphics settings can have a significant impact on performance, but in my experience, not nearly as much as the in-game render resolution and the OpenXR render scale. You can crank all your settings down and have a blue box almost all the time (whipping your head to the left or right will give you a red blip no matter what). Or you can crank your settings all the way up and have an almost permanently red box. There’s a gray area in between where you have lots of room to tweak, and there’s room for personal preference.

It’s good to realize that sitting on the ground in FS2020 is the 2nd most performance intensive situation you can be in FS2020. The 1st most intensive is the 15 seconds after you rotate off the runway. I used JFK for all my test runs since that’s known to be a taxing area. If you insist on a permanently blue box, then you may be leaving a lot of eye-candy on the table. I’d recommend shooting for a mostly blue box, with no red while you’re just looking straight forward or swiveling your head at non-whiplash rates. If you have some occasional red blips, don’t worry about it. I personally aimed for solid blue for most of my ground time, and 99% of my time above 500ft. I don’t know why, but once you’re up in the air, FS2020 is a lot more chill.

@CptLucky8, thanks so much for all your work. I used all your posts as the basis for most of my tweaking. I feel like the least we can do is start a GoFundMe for CptLucky’s 3080. I am amazed you’ve sqeezed as much as you have out of that 2070S. The G2 just has so many pixels to drive😅

I think it’s time for dynamic rendering/quality adjustments of the game for optimal VR target FPS - maybe based on frametimes or cpu/gpu usage and things like that.

I have created an entry in the wish list for this:

Please introduce/support techniques to advance the VR rendering performance of MSFS2020. Techniques like the ones explained in this GTC talk video of Alex Vlachos: [Advanced VR Rendering Performance]

Interesting, I have similar PC specs, but ended with different configs, and also have great experience (while yours is mostly uniform high, I have some on ultra, and some on medium or low):

NVidia settings as in original post in this thread, driver 457.30. 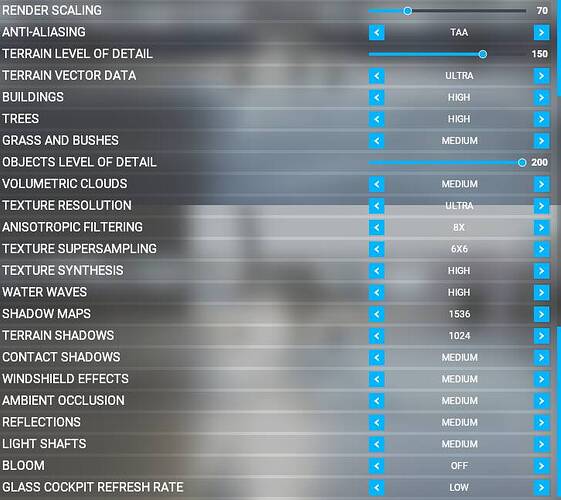 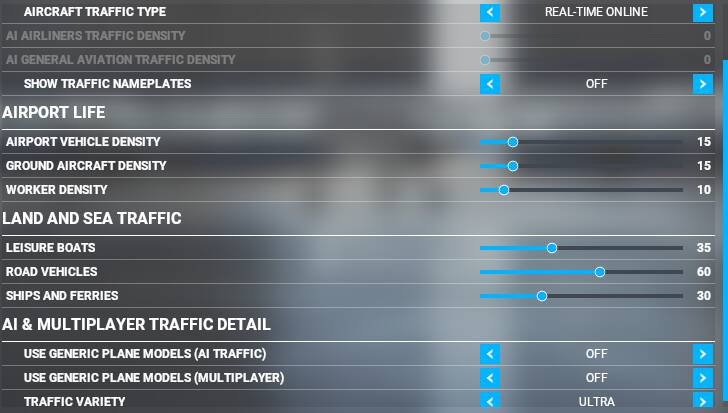 I have 50 fps during Nevada/Patagonia bush trips (with cloudy weather), 45 fps in GA above Sydney suburban area 1500 feet above ground (with clear sky) and similar in Sydney CBD (ORBX scenery), 35 fps in Sydney International airport (by FlyTampa).

I’ve had weird issues too with the USB-C connection on my 2080Ti. I have a 1000 watt power supply and I have quite a few devices plugged into my PC. But every now and then I would lose one of my internal hard drives. The drive letter would just disappear and only a reboot would bring it back. I’m using the USB-C to USB-A adaptor now and I have no further issues. I wonder if using the USB-C port on the GPU increases power usage somehow.

Thanks for the advice. I might take a chance on a pci card. Any make/model suggestions?

I’d support this - it’s been a huge effort, and one very much appreciated!

In my case I got a very cheap “ELUTENG PCIE USB 3.0 Card” with 4 ports on Amazon. Some people got card that have separate power connection, but this one doesn’t. However in my case ASUS Prime x570-p did not recognize G2 in any of its USB ports, but this card reliably works. I still need to set PCI to GEN3 in BIOS to not get the occasional blue screens though. But just doing this without the card doesn’t help.

I just tested the following USB 3.0 Powered hub and I can confirm it’s detecting the headsed too: https://www.amazon.ca/gp/product/B07R97MKQF/ref=ppx_yo_dt_b_asin_title_o01_s00?ie=UTF8&psc=1

Will test for stability, but this hub is useful regardless of G2.

Thanks guys. I’ll get one of these cards and hopefully this will resolve things.

i would totally support a “RTX3080 for @CptLucky8” Campaign!

So the new nvidia driver is still not working correctly for MSFS 2020 VR right?

it works but 457.30 is smoother experience with less stutter

I second cyberceno/Cptlucky. I tried them all… several time… it’s exhausting