Well done on increasing the default drone speed in the latest update, much better.

The best option would probably be for it to remember the user settings but in the absence of that the new default will do nicely.

Drohne Speeds
Has any thought been given to allowing drone settings to persist from one flight to the next?
CriticalClub72 August 4, 2022, 8:45pm #2

Not for me; just touch the control to move the camera and my plane disappears. It’s too quick, need to be able to dial it down.

Is the drone still self rotating over time?

@Nekrob0b … is referring to this bug: 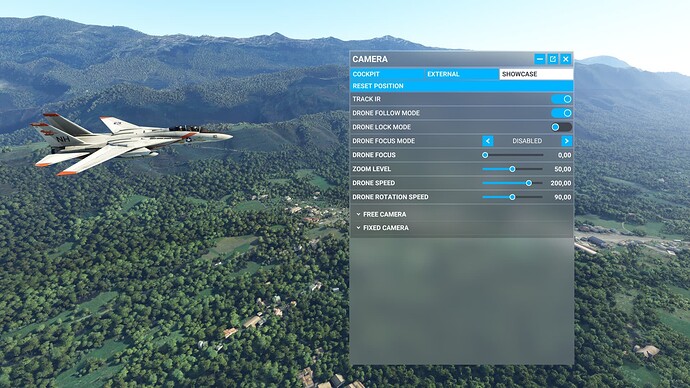 It’s way too fast imo, halfway in between what it was, and what it is now seems like it would be best.

Way to fast people . Half a click and you are a mile away from the plane. Just put a default setting in options so people can choose their personal preference.

Where is this menu? Haven’t seen this, would like to change the new default drone speed down to a more manageable setting.

the menu is in the top in the slidebar, but only visible in 2d mode, which is a problem for VR users. an interim solution is: you can assign a button for the speed of the drone.

For me the default was always too slow, so I had to up its speed every single time I wanted to use it.

it’s funny that everyone is different which is why i wonder why Asobo can’t save it. it can’t be that hard. then we wouldn’t have to discuss so much here

I’m scratching my head wondering who exactly thought that putting the default drone speed to Warp 6 was a good idea. The slightest movement and the drone is a mile away from the plane. Who was asking for this? Who tested this? (<rhetorical question, because obviously no one did).

I read quite a lot of this forum, and I don’t remember anyone ever complaining that the default drone speed was too slow and needed to be super fast. Sure it was a bit slow before, but talk about swinging the pendulum in completely the opposite direction.

IMHO, they should just have it save whatever speed you have it set at and that becomes the default.

IMHO, they should just have it save whatever speed you have it set at and that becomes the default.

I always found the default (10?) waaaay too slow on the ground, though it is fine in the air for in-flight shots. On the ground, around 150 - 170 is usually where I want it for moving around an airfield, plane-spotting in MP or watching AI traffic, or looking around nice scenery.

Simply having the setting stick after the user sets it seems to me the best solution.

There’s a Wishlist topic for that:

Could we get the drone controls to be persistant for at least the current flight. Every time I go back to the drone camera I have to adjust the speed of movment because it defaults very slow.

Is there any way to change this, either in game or through a config file?

Whereas before I always had to speed it up, I now just have to slow it down. As annoying as both are, I prefer the first option.

The drone is way too fast now! Why was this change implemented in the beta when it’s supposed to be mainly about testing that things work and regressions? Was there a wishlist item for this? A better option would have been storing the last used settings.

Completely agree. I know it probably took seconds to change, but I just can’t understand how this was even something that got flagged as needing attention.

Every time I use it now I find myself wondering what on Earth they were thinking!

Assuming it’s a simple change of a number you can’t help but feel the time would have been better spent doing a temp fix and raising the default taxi speed of AI aircraft a bit to reduce runway occupancy times. It’s all a question of priorities right?!

Drone speed is ridiculously fast even at slowest setting.
Would also prefer MSFS remembers the speed I last used it