I am not sure which landing was the best one! Well done with the video’s. I can see you are using quite high settings however, your graphics are much higher resolution than mine. It really looks as if you have everything sorted, you were getting great performance flying around Toronto with all those buildings. Enjoy!
BRGDS. Charles

Can’t see much difference, but no issues running the sim etc. Did rollback/roll forward to see if I ccould see a difference, and nothing noticeable.

Yes, although the driver package is the same - but you are correct that different cards might be impacted in different ways. I have a RTX 2080 Super (EVGA CX Ultra Gaming) and I see no difference on updating to 456.38

Yea, I really came to that conclusion and can not trust that driver. If it’s stopping my G-Master display from initialising on a DVI cable, it goes in the bin. I will try twice and no more. I am happy with my hot-fix driver. My monitor started OK on an HDMI cable. My advise would be to steer clear of these.
BRGDS. Charles.

I’m not seeing a chage in that. The overlay is GeForce Experience driven and not driver driven in any case. Did you update GeForce experince as well? That last updated c. July this year

Thanks Charles - came in a bit hot on that landing - great fun though!. I have all settings on Ultra and turned up shadows and supersampling to max. I stick woth 100 resolution scaling though - that really kills the FPS. Off to fint eh amazon in my latest round the world leg

I have added a few optimisation tips here to try and help him out, if any one else can help him please do …
https://forums.flightsimulator.com/t/re-dreadful-performance/277696

I installed the new driver…@first, directly after installation, I couldnt see any difference. After closing the sim and restart of the PC however, I did gaine two crashes of the sim when I where about to land near an airport..., didnt have that issue before.
So changed a bit the graphical settings just as mentioned by Charles: https://www.youtube.com/watch?v=GcDxzGzvEZw.

Did give it a try this morning, but will do further testing, so far no crashes yet!

Sometimes it’s possible to delete a .cfg file within the simulator which contains the GPU info and graphical settings which might help reset a graphical problem caused by a previous display driver. I do know where there is such a file, but cannot risk any of you trying to do this if you are in ‘dire-straights’ One would back-up the file and delete it and HOPE that it would be re-built on next start.! If I had graphical problems within MSFS, I would probably try this out. I found such a file like this below. YOU MIGHT WANT TO FIND OUT OR ASK SOMEONE MORE EXPERIENCED. I think this would only be done in some cases where you are changing your GPU and you ended up with two GPU’s listed in the file. This used to be the case with FSX, (I believe).

Perhaps if you were upgrading your GPU or have upgraded during your ownership of this software, you might want to check this file out for consistency/double entries…

GeForce Experience has just tried to force the new driver onto me by starting to download it! Even though I don’t have the check box enabled to allow auto updates. How frustrating is that!

I have disabled the X-Box Game Bar within Windows and I have now discovered it running in the background of my computer with it turned off! 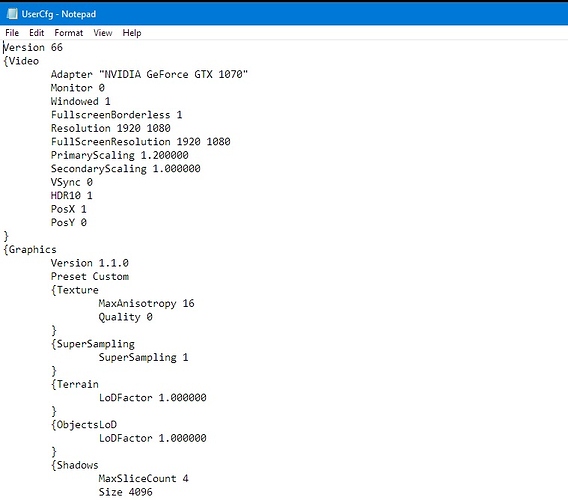 I get about a 10% increase in FPS.
Intel Core I7 - 6700 CPU @ 3.4 GHz
NVDIA GeForce GTX 1060 3GB
16 GB Ram
Resolution is 1920 X 1080
Settings all High
GeForce Experience reports I am using optimal settings.
Flying over the Thames with the Orbx Landmarks London Scenery Pack installed and smooth flying
with no stutters at 18 to 24 FPS

be sure your sim window above all another, some stuff in windows have invisible interface, what can overlaying and you flight back ground “full screen”, and this can be cause of performance/system loading go down some time 5% some time 30% some time 90% if something use a very high priority, and some time is can be cause of lost sound or controls or even crash, i hope ms will create something like gaming edition windows with everything end user need, without any thing he/she doesn’t… gill bates, mear he

I had some interesting results with the new Nvidia driver, I think. I installed it last night but didn’t do any flying until today.

This afternoon, I flew a 787 on an hour-long flight and averaged about 18 - 20 fps. My system is not new (4 years old as of December) and while it does fine with pure steam gauge stuff like the Pitts in places like the Caribbean or in rural parts of th world (40 - 50 fps), it drops to 25 - 30 fps with the same plane at low level in cities like Seattle, Hong Kong or NYC. So airliners are tough.

Anyway, after that light, I quit the sim, did some real-world stuff, rebooted the machine as I always do after sim session, then later tried the same plane. This time, though, I went to the in-game graphics options and reset to the Default which is “High End” down the line for my rig, even though I had not actually changed a single thing. With the Nvidia performance monitor running, my FPS counter jumped immediately by 5-10 fps.

I think the new driver over-rode some default settings for my GTX1070 that were impacting my game settings, even though I had never changed them myself.

After resetting the in-game settings, I flew the Dreamliner on a couple of low-altitude circuits from KBNA (Nashville) out and around the city, down 7 - 10 miles to the south and then back to land again, with FPS settings in the 25 range in cockpit, and 25-30 fps externally again. Not bad for a low level flight over an urban area on High End for an older machine.

If you didn’t already, you should definitely turn on the Developer Mode in MSFS2020 settings and display fps. You’ll see if you are “Limited by GPU” or “Limited by MainFrame” (cpu), and you’ll be sure this problem come from graphics drivers… I updated successfully with new drivers and all seems similar to previous one for me. But reading around those drivers have some kind of problems for many persons so we will have probably an hotfix quickly.

IMHO, Patch 2 and this latest driver are

Can’t say I have ever noticed a noticeable difference with a driver update ever to be honest.

But before and after this driver update specifically it seemed exactly the same.

I’m with you on that, I have never seen any performance change with an Nvidia GFX driver update over the last 15 years.
Always seems to give me exactly the same performance.
Occasionally had one that was unstable and crashed my system but always been able to go back to the previous version ok.

Only useful difference is they sometimes add new features.

I’m finding the Freestyle post processing tool quite useful for tweaking the image quality in MSFS & the performance monitoring overlay seems to be ok, I can just toggle it with a hotkey.

I also installed the new driver with a negative result as my CPU in neutral needs about 6-8 % performance. Some driver files have been always working in the backround. That causes about -8 % performance of my CPU. I reinstalled the old driver and everything was fine again.

I have managed to push my simulator performance even further.

It appears that the developer may have reduced the LOD in the simulation. There are many reports of this, this would contribute to higher FPS.

Here is a video that was made on my i72600K and MSI 1070. As you can see the settings within the simulator are set very high indeed, much further than one would anticipate for my hardware. I do get a pause as I load a new cloudy weather scenario however, I could not induce any stuttering. The approach is unconventional and I deliberately arrived high so I could side slip in-to Meigs Field. The C152 model yaws terribly after coming out of the side slip, it’s not pilot or weather induced. If I tur…

Updated to 456.38, without using DDU, I can’t tell any difference. It works well here.

My Hardware/ on CPU-Z

Updated today and made a few flights. No difference to me.

i think it’s about cpu optimization, in my case gpu was loaded all the time, or you use not max settings and have much more cpu loading, in any way, what you said it’s sound like cpu/ram optimization