With all the other changes Asobo is making to alter “performance” I have stopped messing with the Video Drivers, and adding yet another variable into the occasion.

Some time ago, I reverted back to a previous version, that worked better than the then current version, and since then, I have let well alone.

I may not have the BEST driver , but at least I have one that is always the same, and not adding to the performance confusion.

New drivers just released “465.89” also looks like Resizable BAR is now available (of course depends on your mobo + gpu) but was able to flash my strix 3090 this morning with a new asus bios as well as mobo. Will report back with findings

Hi - what is Resizable Bar?

a new pci-e feature for 30xx owners and if the game support that : the promise is then up to 12% more performance… But is is a nvidia-promise, nothing else

Only for some games and MSFS isn’t one of them.

very important for the VR users and I want to mention it is an OPEN ISSUE in 465.92 too , and not a FIXed

For interesset also the link to the official changelog:

yep… where the promise and the reality collide

Here we can also see: it’s all about marketing gags… 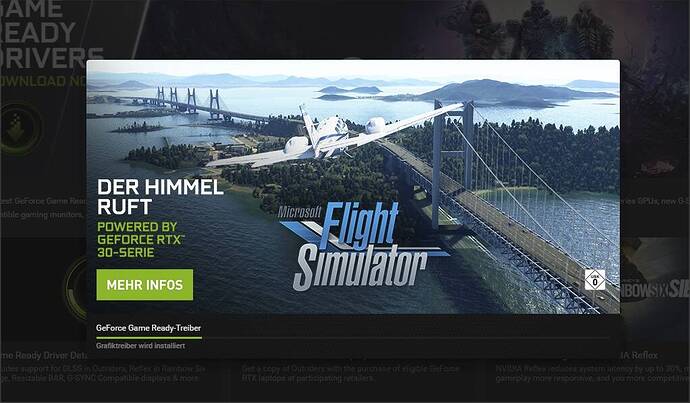 do you have Hardware-accelerated GPU scheduling ON or OFF ?

HAGS always been on, always had problems with HAGS off. 3090 here.

465.89 is working great here in 2D. Flew over London UK after installing and had a great flight. Quite smooth. Next flight up the USA west coast was also very smooth. Not using HAGS. RTX3090

EDIT: Forgot to mention. my card is running cooler with this new driver. With 30fps Locked in game I was only getting about 50 degrees celcius in game menu (typically it tries to run itself to death in menu reaching near 70 degrees) Also cooler during game play. All Ultra settings was typically hitting mid to high 60s is now hitting closer to high 50s low 60s

I have just installed a Windows 10 update which provides some fixes. I am using an MSI 1070 8OC GPU, I have heard some good reviews of this driver. I will try it on my computer over the weekend and report back with the 1070 in mind. Charles

For me (MSI GeForce GTX 1070 ARMOR 8G OC), the 465.89 runs great. This driver is my new fallback driver. I leave it installed and if future drivers cause problems again, I go to the 465.89. However, I cannot say anything about the VR performance.

A warning I wish someone had given me. The driver works great but I read info about the resizable bar feature and thought it would be great if I could get that to work. My motherboard had a BIOS update available that seemed to give the ability to utilize it. What I DIDN"T READ or know was that it would only work if your boot drive is formatted with GPT instead of MBR and had no clue that Windows didn’t play well with GPT. I instead read what great advantages there were to changing your drives to GPT so I did that and set my bios to boot as UEFI which is what supports GPT and Windows stopped working. Not only that but even switching the drive format back didn’t care. All my copies of my boot drives were now hosed with the only option being a reinstall of Windows. I guess there are ways to make this work but you won’t get Windows installer to cooperate. It doesn’t just crash nicely but with a blue screen you can’t continue with.

My saving grace in the reinstall is that I did still have a couple of clone drives of my prior boot drive and was able with a day of copying and pasting to get my new Windows installation and all the important programs to pretty much pick up where they left off but what a pain. I frequently come to Asobo’s defense in programming but I despise like a burning sun the MS development team and I’ve been programming using their tools for decades. A Windows 10 installation should be simple and error free and deal with almost anything you can throw at it. The blue screen should NEVER come up and when you get an error it shouldn’t be cryptic. End of rant.

My motherboard had a BIOS update available that seemed to give the ability to utilize it. What I DIDN"T READ or know was that it would only work if your boot drive is formatted with GPT instead of MBR an

A simple google search should’ve saved you a lot of headache. My Win10 was installed with Lagacy BIOS mode and utilized MBR therefore I couldn’t take advantage of resizable BAR on my 3080.

MBR and GPT is not a driver format, its simply how your C drive stores windows 10 boot instructions.

So I just used the built in Win10 cmd tool called mbr2gpt.exe, and it converted mbr to gpt, then I just did a restart, and used UEFI instead. Didn’t lose any data or anything, its just a one line command to convert mbr with gpt.

Oh believe me. The searches for info on this were extensive. I read everything I could find and saw things about the mbr2gpt function. Where I was misled was in a disk management utility I had that allowed you to do the conversion easily without going out to a cmd box. Their help files just went over the top in describing how it was a great idea to use their utility to do the conversion. Something was obviously missing when they did it however and I didn’t notice that the boot ability of those drives was removed, either that or my motherboard simply would not work in UEFI mode. I have built numerous computers and simply never had to know about those different boot formats. I always just used whatever they defaulted to. Why the Windows install couldn’t tell you there was a better way and simply do that at the time is beyond me or just do a little extra work, go look at the file structure on all your drives, tell you which ones seem to have the Windows 10 system format and fix the boot options automatically on the drive you select. Clearly GPT is the better system.

And also about the Windows installer. How about when referring to drives, not using their cryptic name like WDC1000abcde… but instead giving users a description of which actual drive it is, a drive on your M2 system or in SATA slot x with XXX capacity, 4 partitions labled xxxxx and xxxx… I have 5 drives (2 in the M2 slots, 1 SSD in SATA, and 2 others) in my computer and all the cryptic names are similar and it’s hard to figure out which one is which. And their blue screen of death? What the heck kind of programming is that? Error trapping is not rocket science. And even when they do trap the error and tell you what happened and let you recover from it it is absolutely cryptic. They know what error 5555 is. You can go to the internet and look it up and there’s text telling you what that error is. Why can’t their error box contain that explanation?

It’s been a crappy computer week. I could write a novel about all my bad MS experiences over my lifetime and my 4 year old HP inkjet printer just died and is unfixable (for less than the cost of a new printer) and also unusable for any other functions unrelated to printing such as scanning so it just got thrown away. I can normally fix anything. That wasn’t the first time HP has shown me their true colors such as a fairly new laptop that simply stopped supporting its graphic drivers for a new Windows version which you had to go to. Planned obsolescence makes me livid. It has cost consumers in this nation billions, filled landfills with junk.

it would only work if your boot drive is formatted with GPT instead of MBR and had no clue that Windows didn’t play well with GPT.

You want to tell millions and millions of users with GPT systems that.
That is not correct.

MBR is old technology and has been replaced with GPT many years ago.
GPT is far superior.

Try to use a new M.2 NVMe SSD drive with a MBR system.

My saving grace in the reinstall is that I did still have a couple of clone drives of my prior boot drive and was able with a day of copying and pasting to get my new Windows installation and all the important programs to pretty much pick up where they left off but what a pain.

a day of copying and pasting

I’m sorry but I cannot understand the need for of all this.

Seriously, that’s what you read in all I typed? There’s a real element of rudeness and condescension in your post when I’m basically baring my soul over my own lack of knowledge and screw up.

I’m sure there’s a way to set it up. I never said there wasn’t although I’m not sure if my motherboard BIOS supports it. I’m just warning people that if things aren’t right you’ll have a very frustrating day. Telling people to go into CMD prompts and type in raw commands is always fraught with peril if someone doesn’t know exactly what they are doing. Somehow my initial Windows 10 installation was to an MBR drive. I put in a more advanced SSD and cloned that drive to it not knowing a thing about GPT (nor should I have to). Eventually I put in a new M2 NVMe SSD drive and cloned the system drive onto there for even faster speeds. That worked too. Then I started messing with converting that drive (and all my others) to GPT and it ALL BLEW UP. After that happened I read post after post on the internet of people saying they had the same problem. Hindsight is a wonderful thing.

Reinstalling Windows from scratch when you have major applications loaded (recording software, video and picture editing software, programs that let me work from home and connect securely to our business servers) that has links all over your system (paths to data, program configurations) means days of hard work getting it all back up and running. I knew where APPDATA files were kept for all the software, other files that get written into your documents, application directories (which if they exist when you reinstall, it treats it as an upgrade) . I had copies of that data and moved them to my new system drive.

I’ve built my own computers all my life and have always had state of the art, fast, and reliable equipment and until I saw the help topics of my disk manager software I never had any need to know what GPT was or its advantages. Obviously my Windows install disk didn’t care.