It responds to prop pitch if you set it on a controller, but there is no lever in the cockpit (yet?).

No, the maximum roll rate for a stearman is still 120 deg/s, but at a speed greater than 95 ias. This capacity has been corrected, according to airspeed, dynamic pressures, etc. That’s partly by introducing CFD

It responds to prop pitch if you set it on a controller, but there is no lever in the cockpit (yet?).

Got it. Didn’t know we were expecting an updated cockpit with prop pitch lever (maybe?). I would accept this updated cockpit, especially with the more powerful version

But good to know if we want to adjust the prop pitch axis we can do that with our hardware or controller via bindings.

No, the maximum roll rate for a stearman is still 120 deg/s, but at a speed greater than 95 ias.

I promise I’m not trying to be mean or pedantic here, I’m just trying to help make this product as good as it can be.

That said, I absolutely guarantee you that the maximum roll rate of a stock Stearman with two ailerons is nowhere near 120 / sec, at any airspeed. I’m curious where you got that number?

The following is a video of me teaching basic aileron rolls and loops to another instructor. The first aileron roll is at about 00:15. That’s a 130kt entry speed, and full left aileron deflection throughout the roll, with a footfull of top (left) rudder applied as well during the second half of the roll. 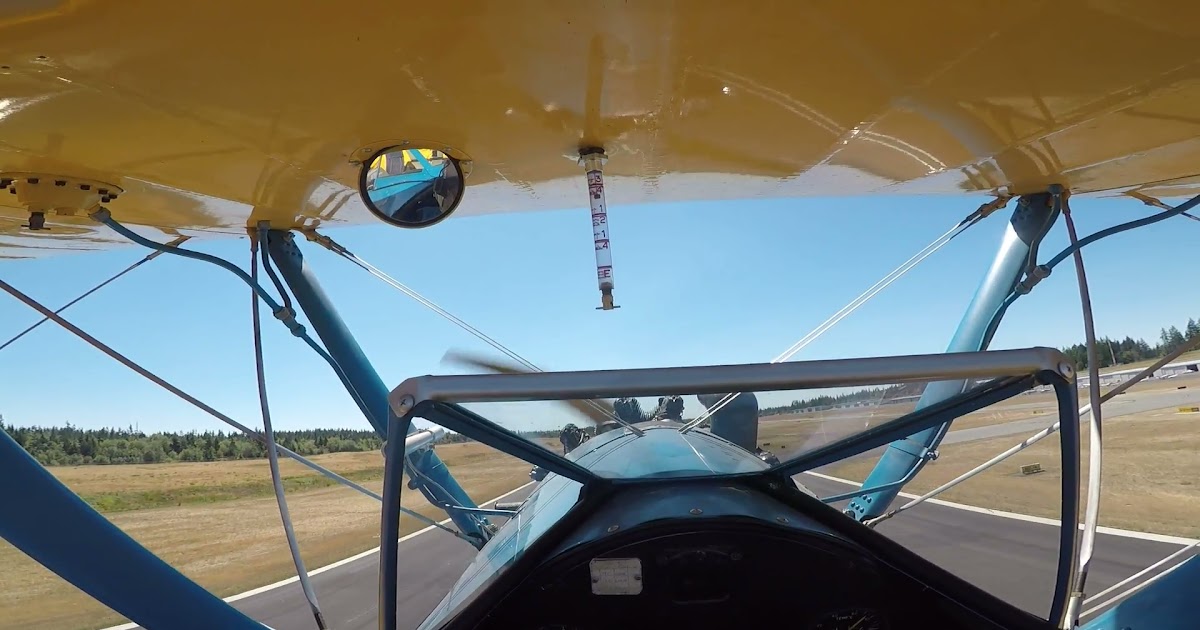 You can see that’s nowhere near 120 degrees / sec. That’d be a 3 second roll. This is almost a 6 second roll… verifying that current max roll rate in the sim Stearman is almost twice as fast as it should be capable of.

But despite what you are going to answer, I just measured it in the game and the stock version under normal conditions is already doing 60 deg/s. I think that equals the 6 seconds of your video.

Oh, I see. Those aren’t aileron rolls; they’re snap rolls. They’re not a measure of aileron effectiveness, as ailerons are not what causes the roll in those maneuvers.

A snap roll is a horizontal spin; it’s performed by aggressively snapping the stick to its full aft limit to accelerate-stall the wing, while at the same time stomping in full rudder deflection to cause a spin in the desired roll direction. A snap roll is typically taught, and flown in competition, with no aileron deflection at all, and many aerobatic airplanes snap-roll much faster than they can aileron roll. In some airplanes, aileron deflection can marginally affect roll rate, and so you’re seeing Mohr deflect the ailerons here just to wring every ounce of roll rate out of the plane. 90+ percent of the roll is coming from the rudder in those maneuvers though, as the wings are mostly stalled. Watch the elevator and rudder, you’ll see what I mean.

Now, before the second snap roll at 11:20, you’ll see a half-roll from inverted to upright. This is representative of a max-performance aileron roll and you’ll see it takes about 3 seconds (for a half-roll.)

I haven’t had a chance to try the new Stearman in the sim yet (or even SU11 at all haha), so if it’s now doing a 6 second aileron roll from around 130kts, sounds like all is well!

At least it’s an interesting viewpoint from which to view the world. Though, I’m not sure how comfortable it is hanging in the straps (you did put the straps on, yes?).

To whom it may concern: version 1.0.5 has made it to Simmarket, unfortunately that’s the one with the floating rivets and the spinners on the props.

I downloaded the update on the marketplace yesterday. Honestly, I’m just so excited that the default exterior camera view isn’t far away anymore! That’s a huge improvement to me! I know we’re expecting another update in the future that will fix some of the visuals errors, but yeah, I’m just so happy about that exterior camera!

The stearman continues to be one of my absolute favorite aircraft in the sim, so every time it sees some updates and improvements, I’m always so excited.

Is there any way to remove the spinner?

Is there any way to remove the spinner?

Above, Dean said it was a mistake & it’ll be removed in the next update and with the floating bolts.

Tried the latest update. Ailerons are still too sensitive with too fast of a roll rate, but I guess we’ve covered that. But has anyone else seen odd behavior of the inclinometer (coordination ball)? It seems to be behaving backwards in some situations for me??

I was just watching the airventure live airshow feed and saw Vicky Benzing performing in her Stearman. I happened to be flying the aerobatic Stearman in MSFS at the time so I tried following along with her routine. I was surprised that the aircraft was responding basically identical to hers. I was able to keep up with her and it reacted just like hers. Super impressed.

Obviously, some things have changed since July. I can no longer pull off the same aerobatics in the Stearman that I watched Vicky Benzing do in hers. I’d like to think I’m doing something wrong but I’m not sure. I just can’t pull it off anymore.

Vichy’s Stearman does have an up rated 450hp Pratt and Whitney R985, that was fitted for crop dusting, not the stock engine. So it should have better performance than an aircraft with the stock engine.

They said they were in the aerobatic Stearman which is the fairing variant and that one has a 450hp engine.

The external viewpoint was the first thing I noticed too! No more zooming in and making the surrounding world too zoomed in.

Now if only that same issue could be addressed on Concorde…

As far as I was aware, happy to be corrected, all Sterman’s in the game are coded to have the same stock powerplant. It’s just aerodynamic tweaks that the flared and covered cowling varient has.

Then I’m happy to correct you! You can look inside the engines.cfg files of both variants, this is for the un-faired version, which looks like a Continental R-670

And for the faired version which looks like a Wasp Jr

Thanks for the correction, must have changed since the original post. 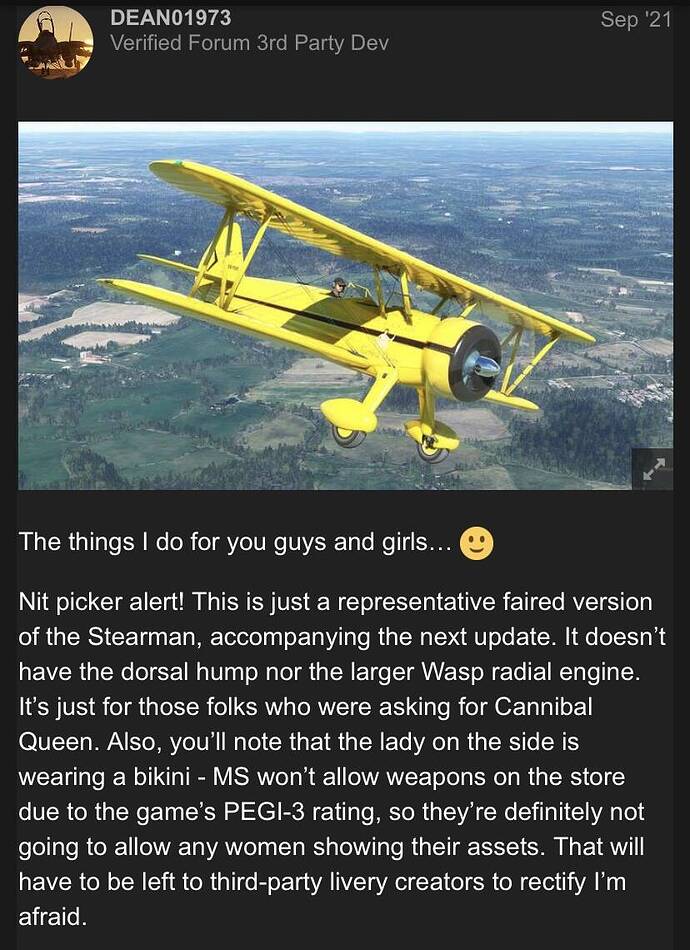