Which version of the Stearman is the latest one? I still have version 1.0.5. with the floating rivets and the prop spinners. That’s the version currently available at Simmarket.

I have v1.0.6 via JustFlight with the rivets and spinner fixed.

Okay, thanks. Then this version should be made available to Simmarket customers as well.

If it’s only a lack of power, simply copy engines.cfg file from the faired version to the unfaired one. You’ll get the 450hp 9cyl engine.
(Unfortunately not visually for the 9 cylinders

)
If it’s a controls reactivity/efficiency problem you’ll have to change their params in the [FLIGHT_TUNING] section of flight_model.cfg.

simply copy engines.cfg file from the faired version to the unfaired one.

I wasn’t talking about the unfaired one.

it’s possible that SU11 has caused a problem in the Stearman wrt some workarounds having to do with drag scalars. parasitic drag, prop drag and so on. If I recall correctly there was some inventive freestyle coding used to get the Stearman to behave somewhat realistically within the earlier iterations of MSFS.
I’m sure Jack or Dean will take a look at it when they have time for a review or if there’s some clamor about it.

Just downloaded 1.0.6. I’m seeing the same odd behavior of the coordination ball as well. Along with a non-stop need for right rudder which I didn’t see before. Straight and level flight has the ball offset to the left.

Straight and level flight has the ball offset to the left.

Yes, I noted that too… So in cruise, the ball indicates a need for left rudder.

My flight model mod still works fine with this version, and I still prefer it. All personal preference of course, though I will say that the roll rate of my mod is still more accurate. 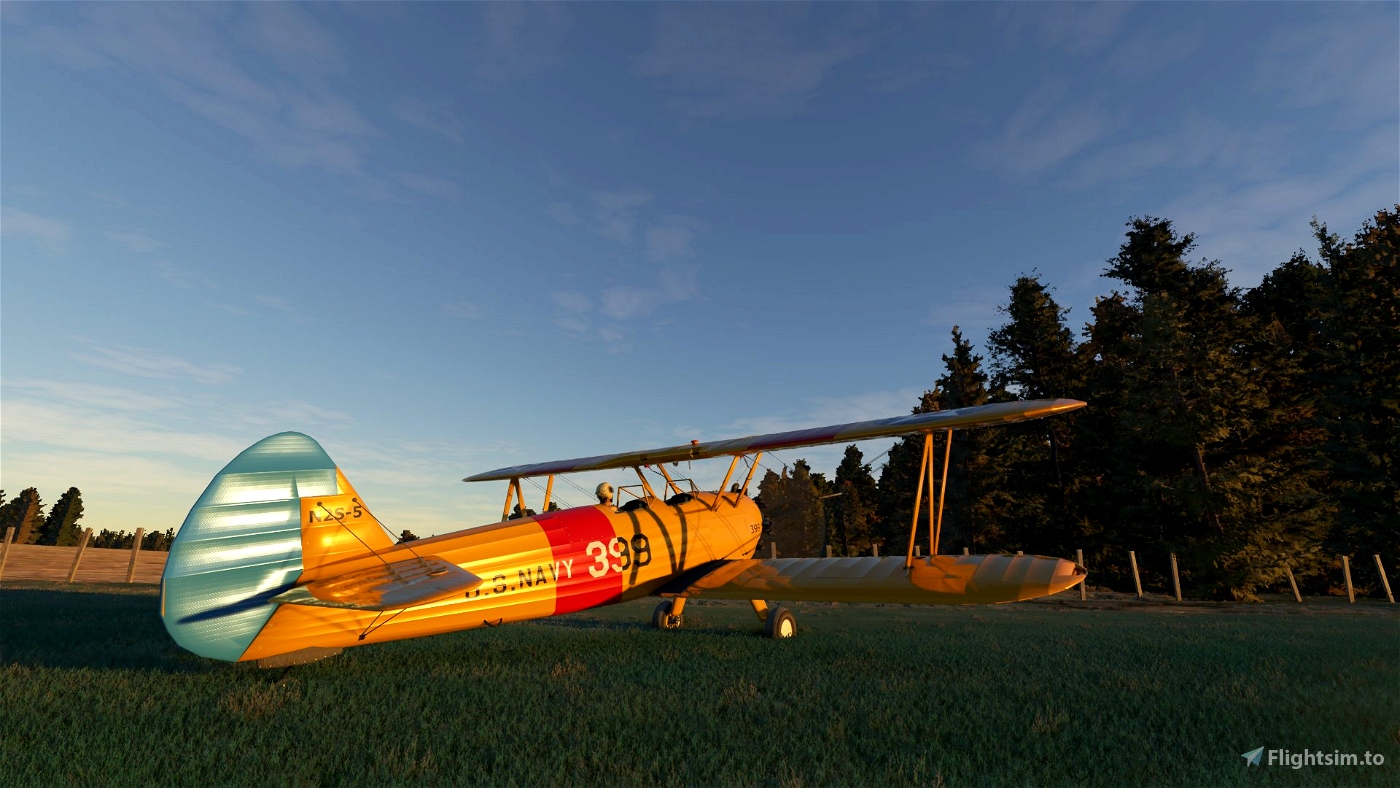 Aaaand 1.0.6 is available on Simmarket now. Thank you!

As of last night 1.0.6 still isn’t available in the in-sim marketplace. I know the marketplace is always slow to update products, but for some reason they always seem to take the mick when it comes to the stearman. We had to wait something like 3 months for the update which featured the faired version. It’s really not good enough from Asobo.

Strange. Perhaps you’re looking for an update, rather than a fresh install? I just did a fresh install of the Stearman from the marketplace and it was indeed 1.0.6 with spinner and floating rivets.

I just did a fresh install of the Stearman from the marketplace and it was indeed 1.0.6 with spinner and floating rivets.

Are you sure you have the correct version installed? 1.0.6 is fine on my end: no floating rivets and no spinner on the variant without the wheel and engine fairings. 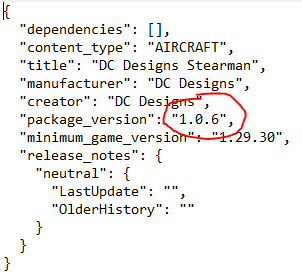 Here is the variant without fairings (and no spinner/floating rivets): 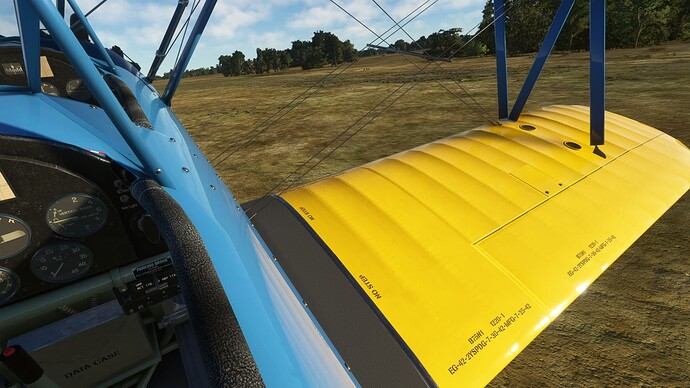 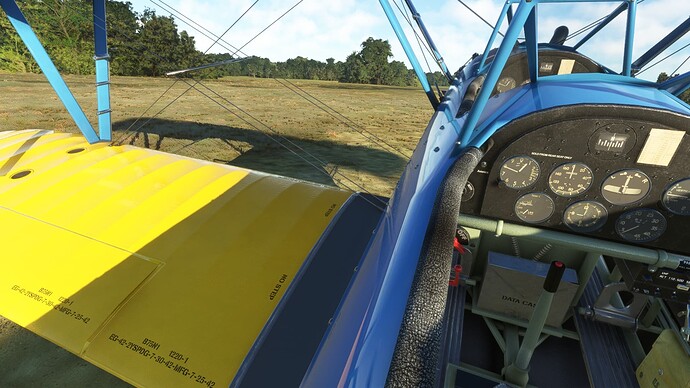 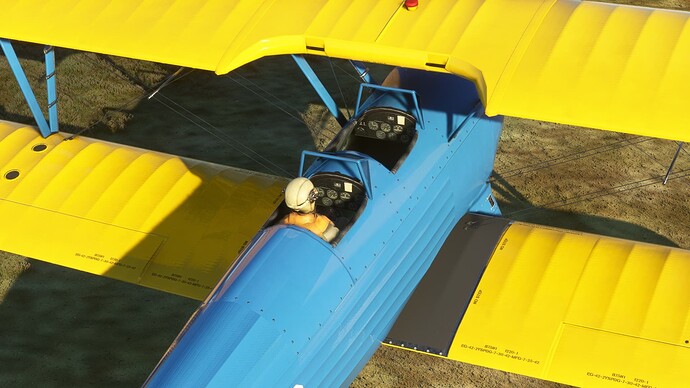 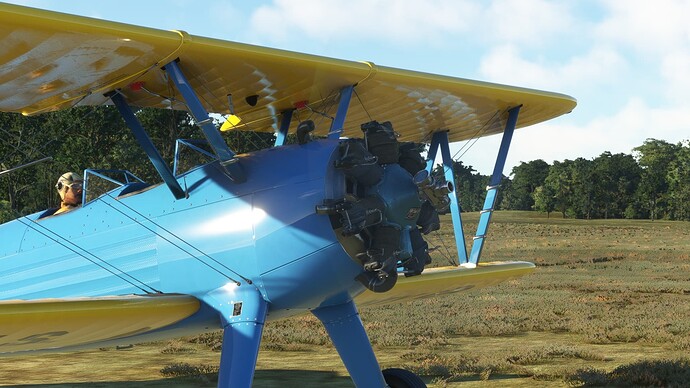 And here’s the variant with fairings and spinner (but still no floating rivets): 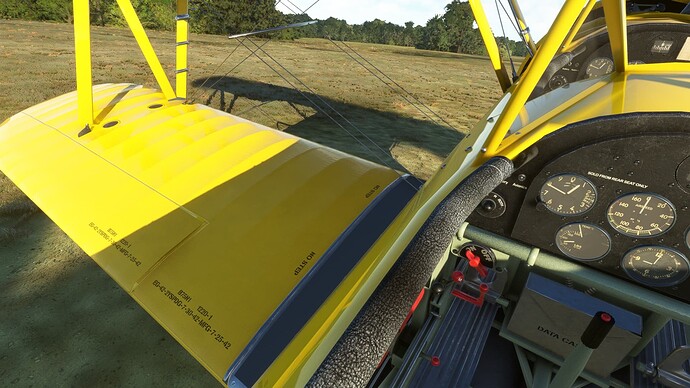 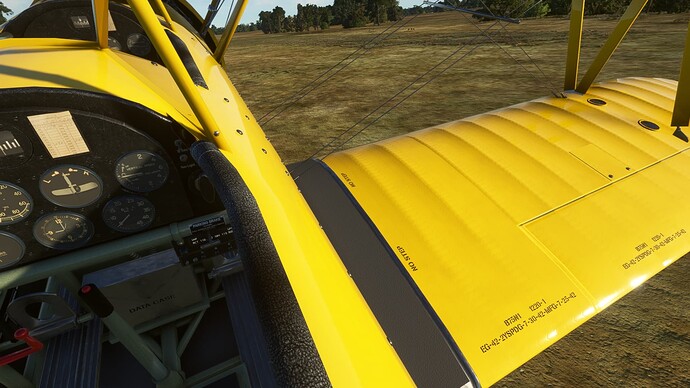 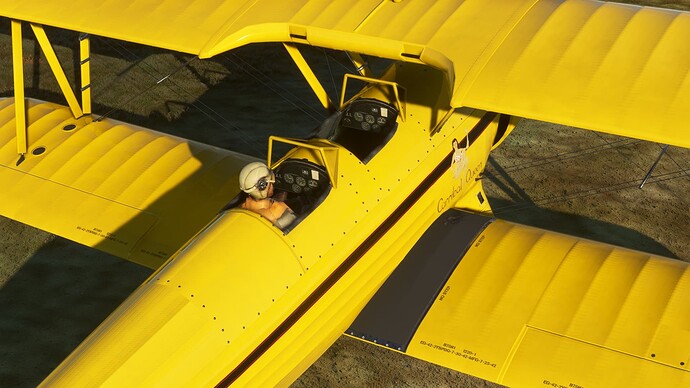 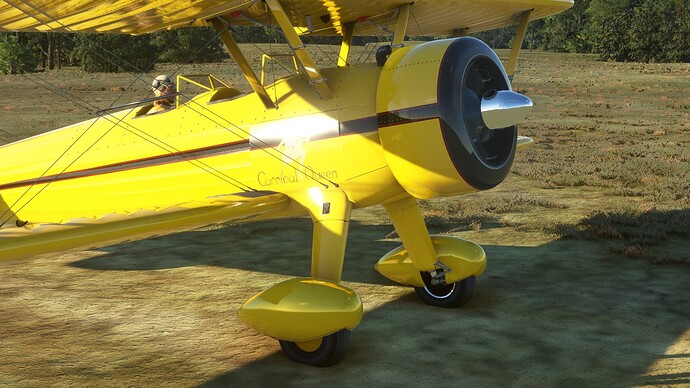 By the way: something isn’t quite right with the faired version: the prop lever axis works in that one, even though it should be a fixed pitch propeller with no propeller lever in the cockpit and at full throttle it reaches speeds in excess of 170 knots, which seems a bit much, considering that the unfaired version only reaches about 114 knots.

I think that’s actually intentional. Most ‘super’ Stearmans IRL with the 450 hp engine have constant speed props so they modelled that with the fairing version but didn’t actually include the prop lever in the cockpit.

Are you sure you have the correct version installed? 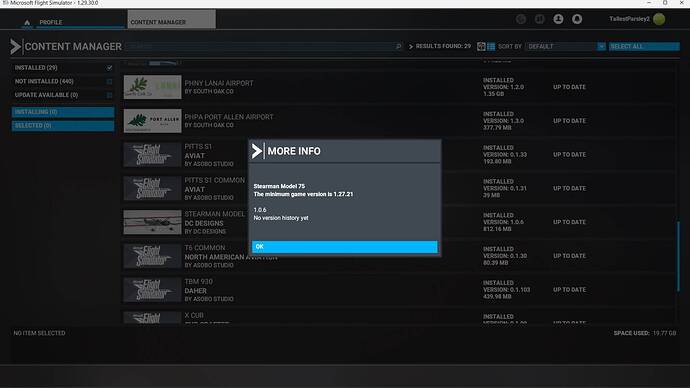 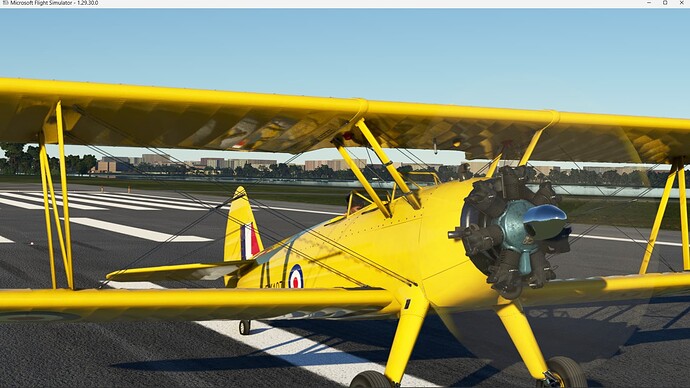 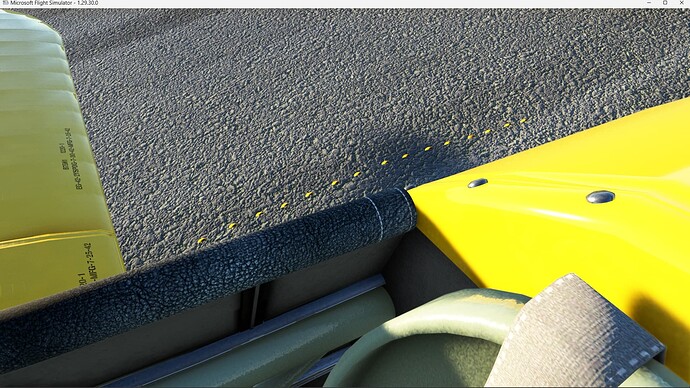 THIS is a proper Super Stearman spinner 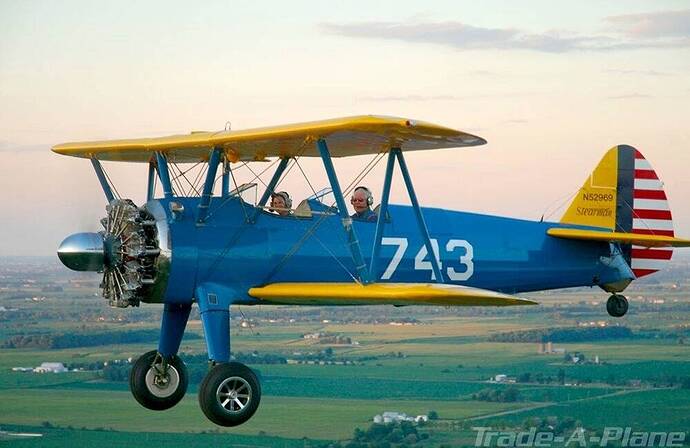 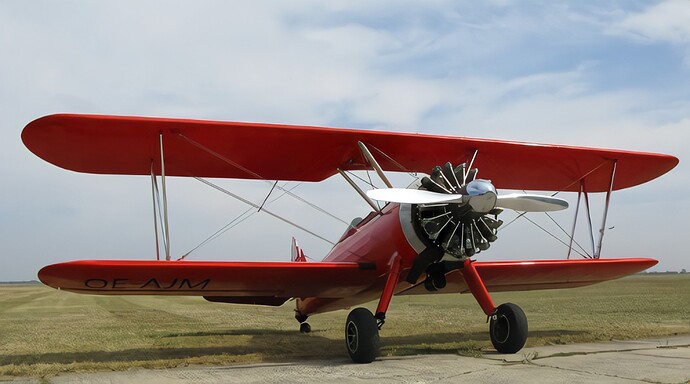 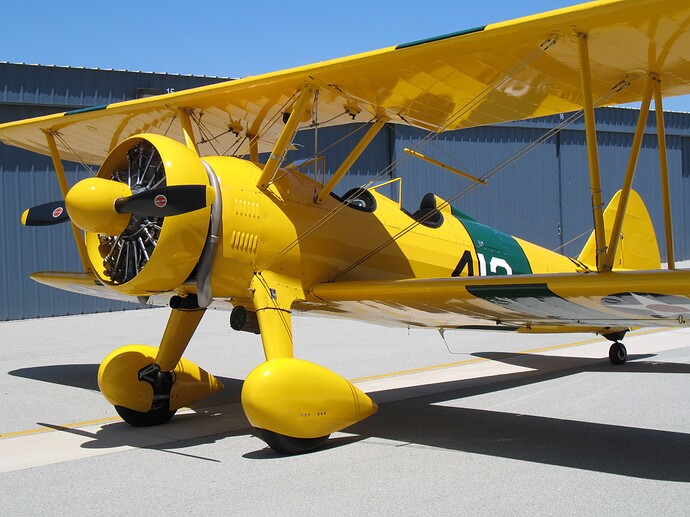 like my ol’ granpappy used to say - “if you’re going to do a thing, do it right”

There is no one “proper” spinner on a -985 Stearman; there are almost as many cowling (or uncowled) + spinner (or not) combinations as there are restorations, at this point. The DC Designs choice works great.

170kts at full throttle level cruise though?? I haven’t tried the faired model in the sim lately, but that’s crazy. That’s almost straight down terminal velocity for this airframe.

The Cannibal Queen btw didn’t have a -985 the last time I saw her, which was about 10 years ago so perhaps something has changed. But at the time (and when she was made famous in Coonts’ memoir) she had the Lycoming R-680 300hp engine, my favorite engine on a Stearman. Smooth and fast, without the total overkill fuel gulping of the -985 for 10 more knots.

I thought the same thing. So, I uninstalled the aircraft, even deleted the rolling cache and then re-installed the plane.
Nothing changed.
As you can see, I have a very minimal installation, less than 20GB, and nothing in the Community folder.
I am baffled… hate to think I’d need to re-install MSFS to fix a spinner and a few floating rivets.