As a kiwi aviator who is pretty familiar with seeing my country’s landscapes from above, I have naturally downloaded both of these and conducted some test flying to see is there are any pros and cons I could pick between the two addons. The route I chose was from Wellington (NZWN) to Wanaka (NZWF), along the spine of the mountainous South Island using the Carenado PA34 as my performance benchmark.

I started off with the Orbx mesh loaded, flying with real world weather, in the middle of the day. Whilst the screenshots might look as amazing as the promo screenshots on OrbxDirect, performance was fantastic, with FPS sitting between 40 and 50 the whole way and no stutters to speak of, however low cloud did roll in over the terrain towards the last part of the flight defeating the purpose of the comparison somewhat. 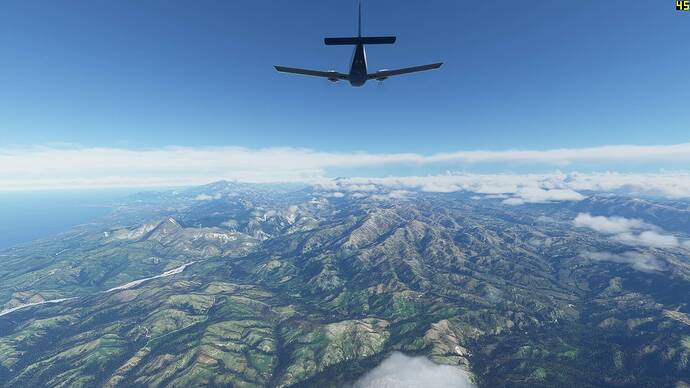 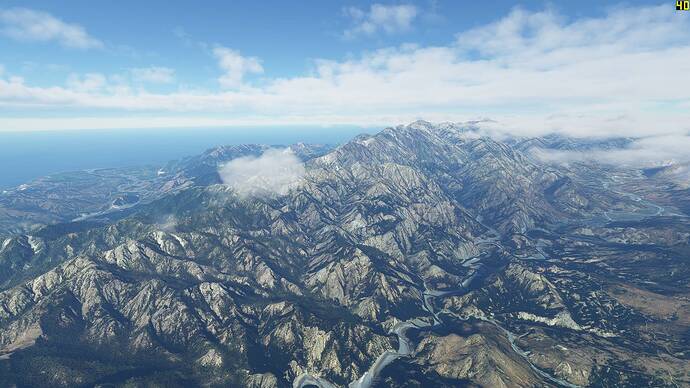 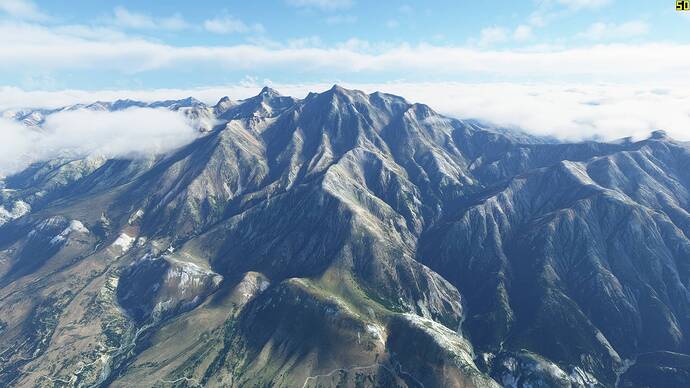 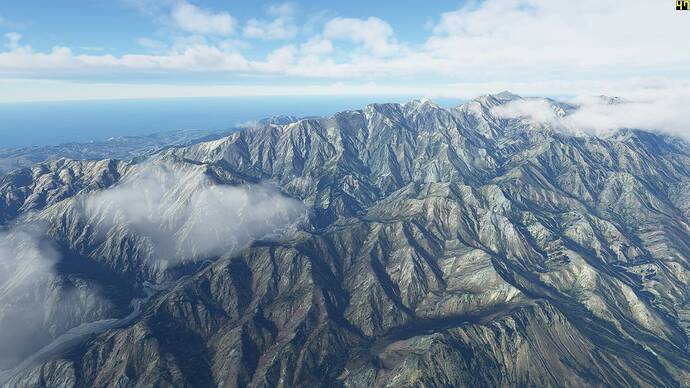 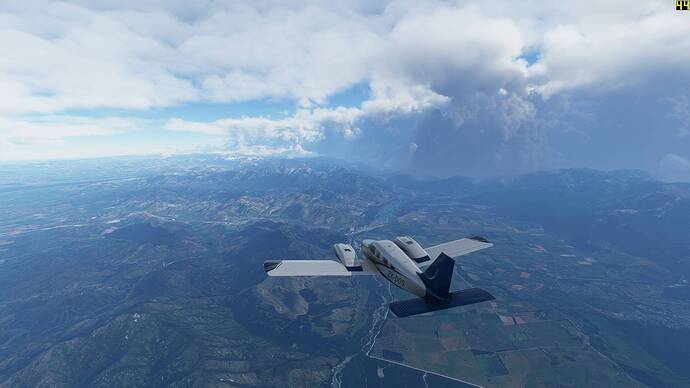 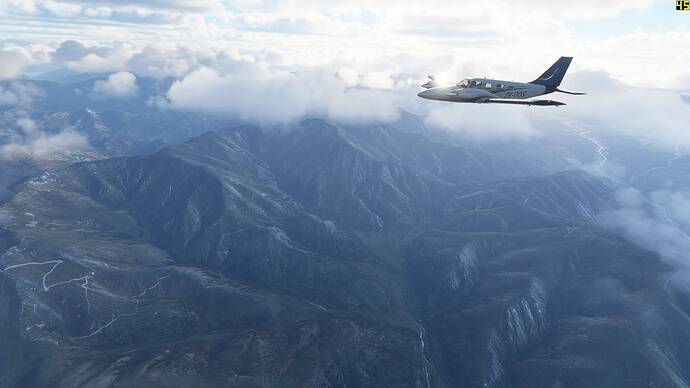 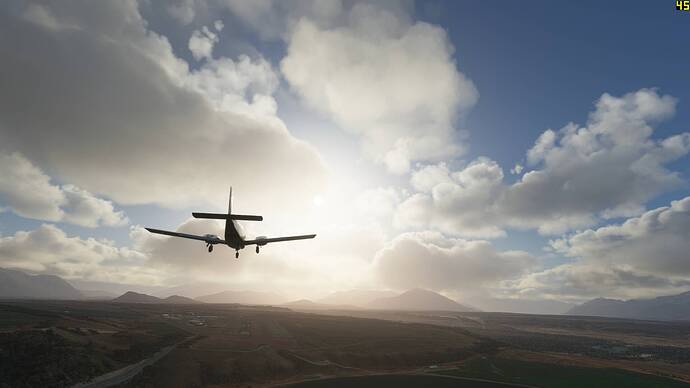 After landing, I closed the sim, swapped out the Orbx mesh for the freeware DEM in my community folder, rebooted the computer and flew the reverse leg. This time I set the cloud base to above mountain tops, and feel like the screenshots came out looking a little more cinematic- mainly due to the fact that flying north towards the sun added dramatic backlighting to the landscape.

Whilst the terrain below did look very impressive, the sim seemed to have a little stutter approximately every minute and a half (I started timing the intervals after a while) from 40FPS down to single digits momentarily. My guess was loading of the next area of mesh I was flying towards, with the total unzipped freeware mesh folder sitting at 9.72GB compared to Orbx’s 523MB! This may not be the case for everyone- but this was a bit of an immersion killer whilst flying a light twin at a groundspeed of 170 knots on a dedicated MSFS rig with a solid state hard drive. I’d be interested to hear if others report the same? 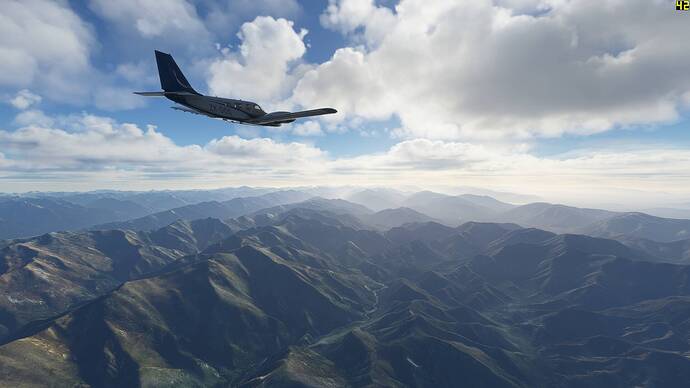 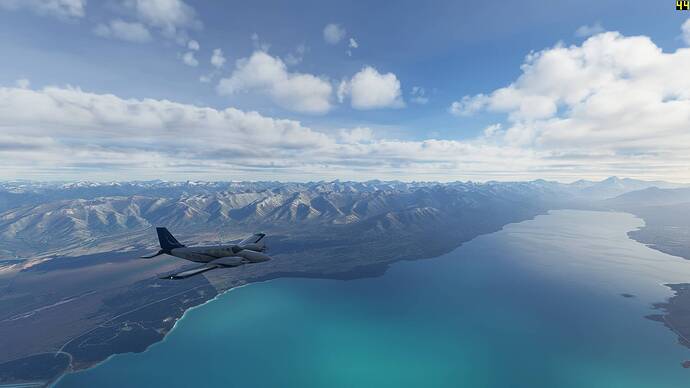 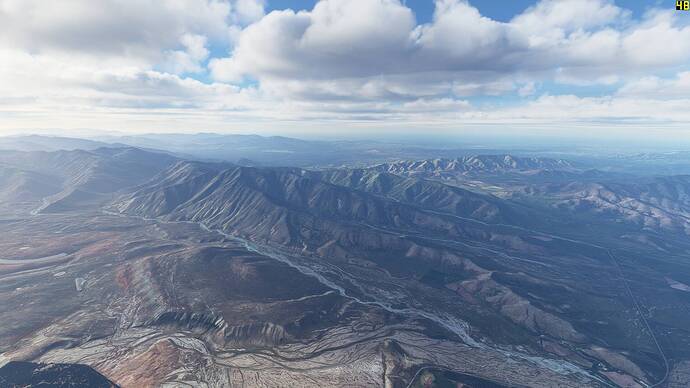 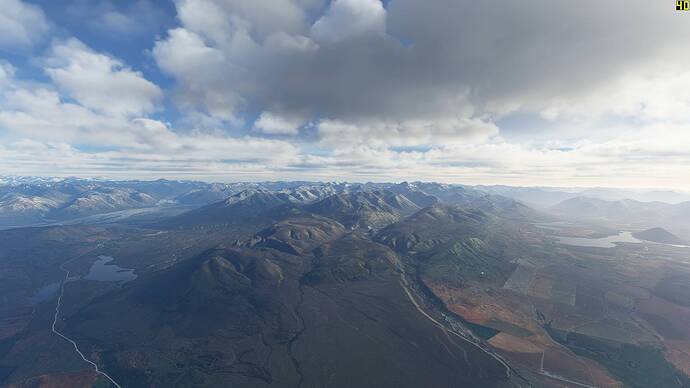 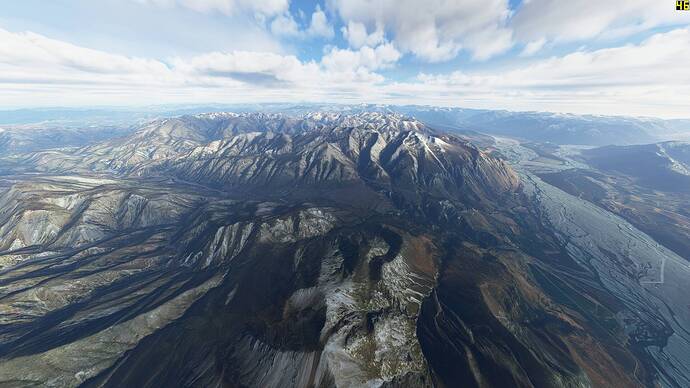 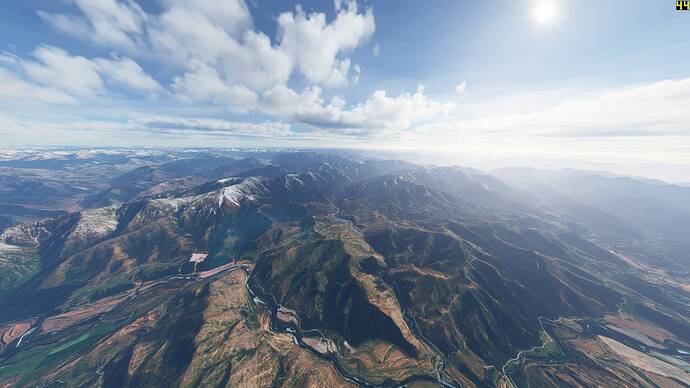 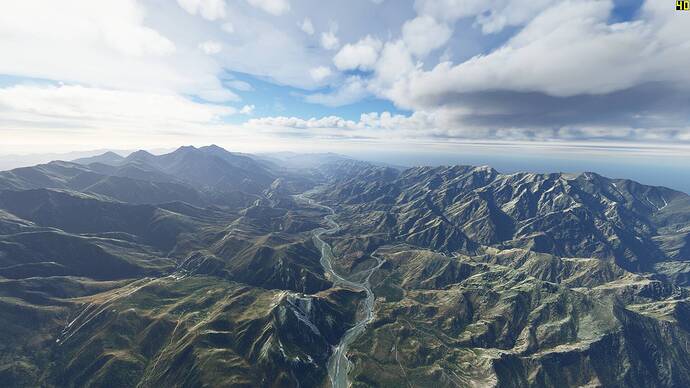 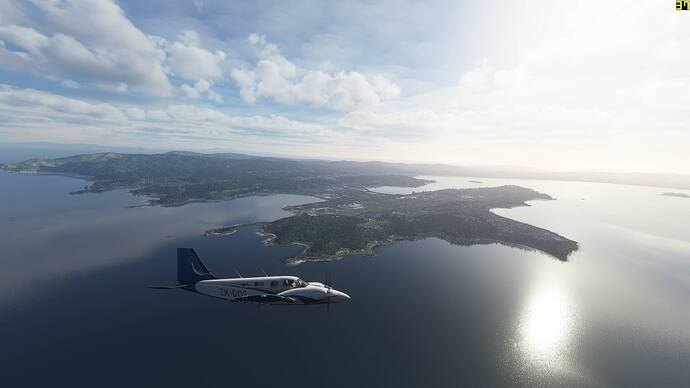 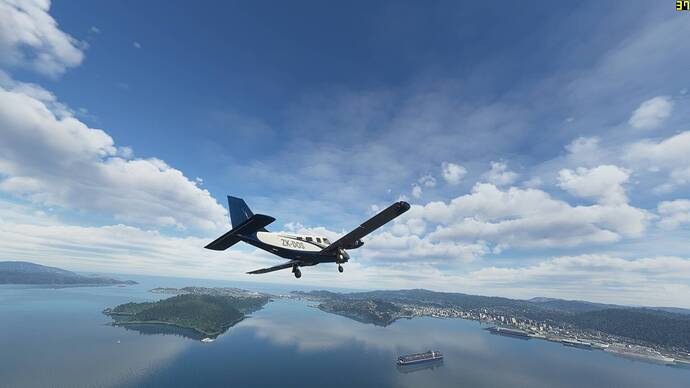 I also noticed some fairly major glitches present in the freeware mesh, with two huge artificial ravines running east/west across the span of the South Island between Christchurch and Wellington. On another flight, I also observed D’Urville Island (a 150km square mountainous island located in the Marlborough Sounds) textured with water tiles rather than land. 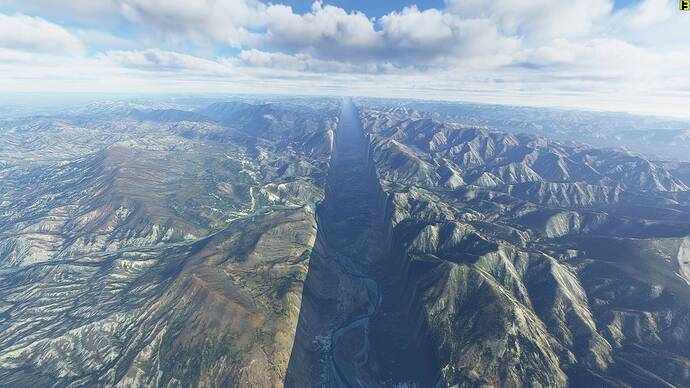 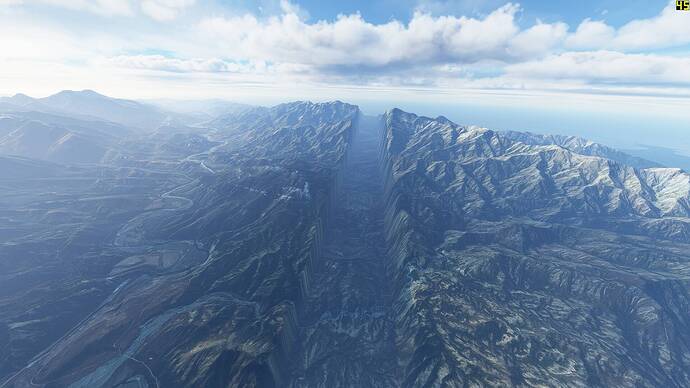 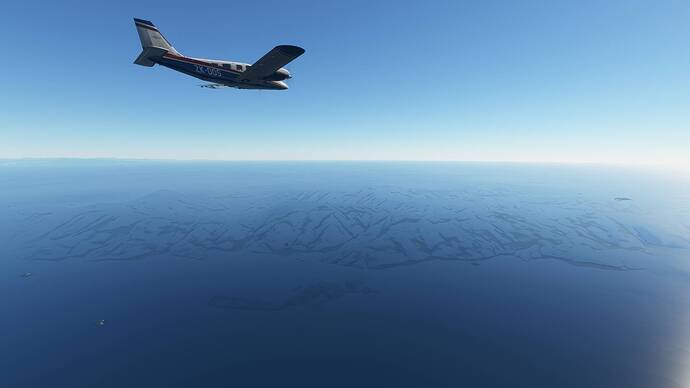 Based on these observation, Orbx’s payware gets my vote as the one to keep installed. Thier website blurb says future updates will see the DEM get increased in res to 1 metre in some locations from LIDAR data.

That being said, I absolutely love the fact that freeware mesh’s are being released by the community for MSFS and Mikeatt’s has done an amazing job, better than any freeware mesh release I think I’ve seen in my 15+ years of simming. His other releases for the Canary Islands, Balearics and Scandinavia are smaller in filesize and run flawlessly. This thread is just one persons humble opinion and I’d be interested to hear what other simmers are thinking!

Great and helpful observations. Many thanks for your time and trouble.

Yep if you live in new Zealand or fly there a lot the Orbx mesh seems the best option.

The freeware of course would be the go to if you fly in NZ less frequently and just want something to enhance the occasional flight. 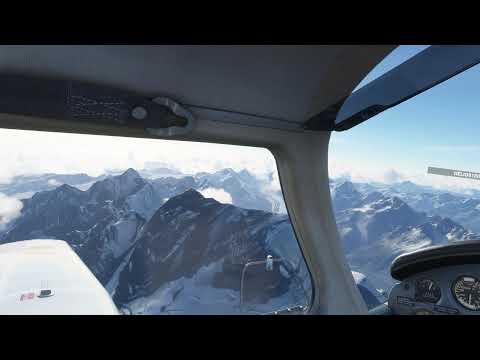 The size difference between OrbX and the freeware one is literally exponential, this makes me suspicious that one of them is doing thing wrong.

I have 10m dem for most of the alps and they are big files several GB each, so I’m wondering how OrbX keeps the file so small while still claiming to be super high resolution? Something isn’t adding up…

Did you actually compare side by sides to see which one looked better?

The size difference between OrbX and the freeware one is literally exponential, this makes me suspicious that one of them is doing thing wrong.

Unless you know details like what compression algorithms (if any) are invoked it is pretty much impossible to draw conclusions about the accuracy of the mesh based on the size of the database.

I don’t know what algorithms they’re using. However 500mb for the entire country just seems tiny. Sounds like witchcraft

And yet, there is a difference that is subtle but quite noticeable. The crags are craggier and the crevasses are crevassier ie, deeper and darker.

The same holds true of the Alaska mesh.

In my opinion, well worth it.

difference between orbx and freeware?

ORBX is more efficient in the render, no noticeable FPS loss and uses coding to integrate into the game better, not sitting in the community directory along with all the other stuff.

The difference is less morphing and popping and an increase in more consistent visuals.

Anyway, I use it and I recommend it.

Thanks, those were extra details I hadn’t even thought of. Good info.

I was more wondering though if there was a noticeable difference in the actual DEM rendering, like in the alp tops and along the coastlines. Was trying to find side by side images.

I’m using the freeware DEM now and it seems great, but every once in a while the sim stutters really hard. I’m trying to decide if I want to spent money to switch to OrbX

I read in another thread back when this came out back in May that there are two different ways to implement a new terrain mesh. I don’t recall the acronyms, but I believe one is like adding a new object, the other handles it more like the Bing data mesh stream. The second one (Orbx’ method) is much more efficient data wise and can mostly eliminate the morphing effect as you’re closing in (although - oddly enough - Asobo themselves can’t seem to figure that out). The downside is that the method is locked to a global grid with really big squares and it is difficult to make the borders blend well. Supposedly that is why we’ve mostly seen isolated islands like NZ and Iceland (and Alaska).

I have the Orbx mesh and can recommend it - mostly because it eliminates the immersion killing constant morphing mountains.

I caved and got the OrbX mesh. Interestingly, it’s a full gigabyte in size, which is about twice the advertised file size… 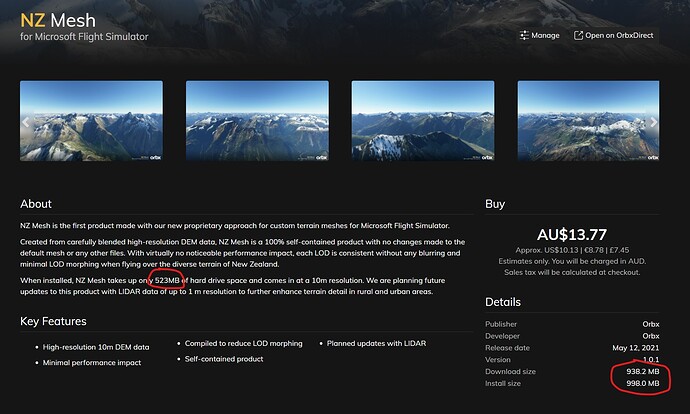 Exactly. There is the .bgl and .cgl variant.

One of these variants (i just dont remember which one) only works well for isolated areas, like NZ. While it causes issues when there are neighboured Meshs.

Let us know your thoughts in comparison to that which you had before?