No news on WASM at this time but I expect we will be able to talk about it fully during our Sim Update 10 Stream this month.

Sounds like it is not going as planned. Will be interesting to hear where this is heading.

Going in with fingers crossed however. Surprisingly a very small update.

WASM will not be released in a Bata. I was told that by MS and Asobo.

Well the last release notes said something about memory optimizations. This one said it disabled those optimzations, which I’m hoping will restore the 10-12 fps loss that happened with the previous build

I hope so to, but I’d hazard a guess that was the identifies cause of the artefacts in DX12. Hopefully disabling that particular feature fixes both issues!

I’m also hoping to see the performance of the first SU10 build return. Although I won’t be able to see for myself until I get home from work. D’OH!

But that means it will be part of SU10, without proper testing. Unless they postpone it.

Straight off the bat VRAM usage is about 1GB lower at my usual test point (stand 519 inibuilds LHR). 9.7GB rather than 10.8GB.

Hopefully it looks better for you guys: 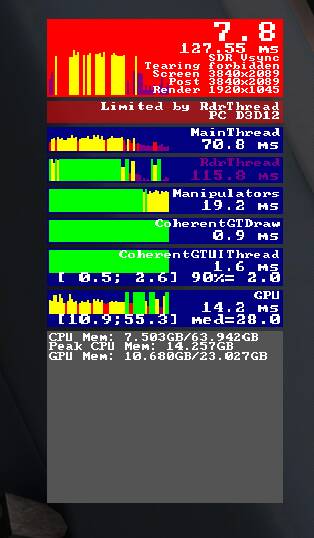 VR UI bugs not fixed and I’m unsure if the VR HDR bug relates to the 100+ voted Eye Exposure issue that needs serious attention, might not get a chance to check this evening so hope someone else can confirm if this is “fixed” or not.

Mine won’t even load, so… flightsimulator.exe stops responding at about 80% on the splashscreen…

DX11: Performance as smooth as before. I am able to achieve a smooth 36FPS 1/4 V-Sync.
VRAM management is good.

DX12: Performance not good. VRAM still noticeably higher than DX11 and close to overload on my 8GB VRAM. Stutters

An update to the beta is out: