There are already three threads regarding night lighting issues in the q&a questions section . We should vote…

Unfortunately I see no question really relevant. It is not just a matter of light intensity, but to bring back the diffusion, etc. Basically bring back the old lighting and tweak from there.

Light variations is a mistake in my opinion, light intensity is just part of the problem and to remove the lights in the coutryside will make it worse.

I voted on all “night lighting” related questions… Each of them only touch a certain issue(s) of the current state of lighting though… However in the Q and A “rules” there, we are supposed to ask questions that are not in the bugs and wish-list, as they will go through them anyway.

But oh well, we just want to make sure they hear us and looking forward to hear what they say regarding this.

Yup looks like an arcade game now at night. Boring to look at.

We need to put votes on these two Q&A topics.

Voted. I still have a faint little glimmer of hope that they fix it in update 7 but since this seems to be more complex than we thought I expect it to take a lot longer. I hope they‘ll talk a bit about it in the Q&A.

The terrain emiting light that people talk about was perhaps a workaround to mimic the light diffusion at the distance. They could brighten a bit the lamps perhaps?

The Sepia mask and its purpose is pretty well documented by now, as a “trick” for emulating big groups of light at a far away distance since rendering every single lamp regardless of distance would be incredibly resource consuming. But it requires quite a few fixes/adjustments to bring it from simplified pre-patch, to realistic. Just brighten the lamps a bit isn’t enough, by far.

Before the sepia mask was introduced, Early Alpha, while not anywhere finished/perfect, we had in my opinion the most promising night tech ever.
That was what the devs made themselves before inviting a quite big group of gamers/simmers/non-pilots to voice their opinions/feelings.
However, what the early alpha was lacking was a way to make distant cities visible in the horizon without rendering “millions” of lamps individually (FPS suicide).So the sepia brought great promise for this.

But admitted by the devs, this sepia-mask got poorly implemented being fully visible both very close and at low altitudes, making huge areas glow in the dark, illuminating unlit features as much as illuminated ones.
(Deserts, fields, roofs, and much more, glowing in the dark as much as streets)
And lamps disappearing completely at just a fraction of the visible distance of real life. Although tuned and beautiful, it only did a good job for low altitude and close distances. The rest became a brown “radioactive glow”. Very different from how it looks IRL, both for eyes or cameras, as shown in several images/videos in this thread.

That was what the sim was released with, and apparently many (non-pilot) users grew used to it and believed that’s how light works and what night looks like IRL.
But sadly it’s not, and I can see many are frustrated of this unfinished change with many users seeming to prefer “pretty” instead of what’s actually realistic.

In fact I saw nothing wrong with the original lighting in MSFS.

The “original lighting” had several shortcomings, which made it one of the Most top-voted bugs. But many of those aren’t obvious for non-pilots, caring more about how pretty it looks or “feels” in the sim.

I’ll try to explain more.
Take a look at this pre-patch screenshot of Dallas at night: 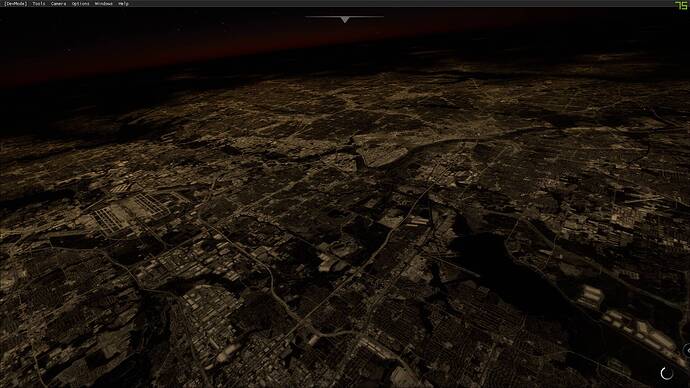 A vast majority of the bright parts in this picture would in real life be pitch black, mainly lamps along roads & parking lots would be the dominant bright features.
In MSFS (pre-patch, and still to some extent), you see tons of rooftops, fields, quarries, yes the full daytime texture is visible regardless of light sources, but with a brown/sepia monotone filter.

I flew over Dallas some month ago during a night crosscountry at around 12,000 ft (above the Class Bravo) and pre-patch MSFS didn’t look anywhere close to what it actually looks like, with long bands of highways, grids of bright roads, and the rest dark & feature-less. Even less when we’re talking 30,000 ft.

.
I can see the many aspects of night lighting is confusing for many, especially those who haven’t spent a lot of time flying in the night IRL.
This might help you understand what’s wrong using this method for anything else than the distant horizon: 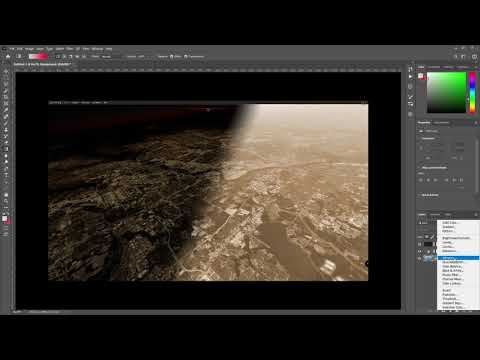 Light variations is a mistake in my opinion, light intensity is just part of the problem and to remove the lights in the coutryside will make it worse.

Could you elaborate on this, not sure if I understand you correctly. Would implementing light variations be a mistake, or do you mean the current lack of light variation is a mistake?
And do you think suburban roads with no lamps in the real world should actually have lights in the sim?

Although containing many “moving parts”, night lighting isn’t really a mystery, it’s fully possible to benchmark against real world using videos and pictures as long as processing/exposure-settings are taken into consideration.
It’s definitely not “pretty” at the moment compared to pre-patch tech, but with changes to light-placement logic, sepiamask-reduction, brightness & lampbulb texture scaling we will for sure bring back the beauty of night flying, as well as making it much more realistic than before.
It’s a simulator after all. Realistic properties first, and then tune for beauty from that.

but with changes to light-placement logic, sepiamask-reduction, brightness & lampbulb texture scaling we will for sure bring back the beauty of night flying, as well as making it much more realistic than before.
It’s a simulator after all. Realistic properties first, and then tune for beauty from that.

I agree, and has seen from the many comments and screenshots supporting this, I believe restoring point lights as in pre-release but adding Black Marble texture only in the distance, would be a first step in a good direction at minimal refactoring and implementation cost (development wise).

Totally agree with you

Could you elaborate on this

Light variations must be a slide where people can chose the intensity of lighting, because I do think we had different lighting before. Right now is that we have the same light intensity for all distances as it seems.

I just flew single engine / low altitude before, so I can’t comment on high altitude flying, but whoever voted on that topic about sepia mask or whatever that was, just ruined the game for everyone. People need to be more careful with this.

At least from the TBM and the bush planes, if felt realistic from my perspective. Could improve, yes, but from what I see, the sepia-mask as you call it is the only way. Because right now we have a computer generated grid that is burning our retinas and preventing us from flying.

Perhaps they felt that post was calling for the end of the sepia-mask, and they did just that. If they are going to bring it back with improved results? Who knows.

So yes, I see no post there to vote up. They should work with the sepia mask unless someone has a solution to reproduce millions of light bulbs at the distance.

I’ve seen that too, however this thread has quite a lot of votes for them to ignore it…

I sure do hope that means they’ve fixed it and it’ll roll out in update-7, hence they’re confident it’s no longer needed to be listed.

I’m afraid all the posts about the Night lighting will have to be repeated in the upcoming weeks.
I can’t find it anywhere on the “Feedback snapshots list”, but okay “me no Engrish” so I may have overlooked it.
Also I can’t imagine this problem to be solved otherwise the Devs would have certainly marked it as “solved”.
Fingers crossed, back up your files- and the Community map, postpone other updates and have faith.

This topic is too popular and voted for them to ignore it or to just sweep it under the carpet. Let’s see what the update brings. Perhaps it is a feedback bug (no pun intended).

When I see that bugs list, it seems that none of the listed have “fixed” or “resolved” status. So I think maybe they sort of removed bugs that they believed have been fixed already?

But do they usually close a bug thread (like this one) if it has been fixed? Or move them somewhere?

I’m afraid this topic might just go under the radar because “night lighting” is supposedly addressed already in the previous update and Q&A.

This is why I’ve created a topic for the new Q&A here:

Make sure to vote for it!

I also voted for it!

Vote, vote, vote, does it really make a difference anymore?