So, to Asobo, please don’t listen to us as a majority. Please listen to the suggestions – but only implement the ones you agree with.

and therefore this is why there is such discussion…

Agree completely. Edit: until you edited, now I agree mostly… : )

Urban textures are too dark again. They made them too dark in the last fix as a temporary measure. Personally, I think they made night lighting WORSE. But, who am I to opine on anything, nobody listens anyway.

As some of you mentioned above I think that this thread should come to a close as it doesn’t seem to have any impact ( one month and two update patches later).
Even though it has several votes it seems that the thread is too big for them to track down the different issues and we are almost in the same spot .
We could wait for them to hear what they’re gonna say in tomorrow’s g&a or I could try changing the topic, for being too general or too harsh, but I don’t think that this will make any difference at all. Moreover there are more than one or two issues mentioned in here to have a more direct one.
We should summarize and see what are the main areas that should be addressed first and start different threads about them.

Urban textures are too dark again

Urban areas doesn’t glow in the dark IRL like it did before the update(and still do to some extent)…
You’ll see lamps, and when close enough (or enough lamps close together) you’ll see the effect lamps have on the ground. Everything in between will be dark. Have a look at this video, lamps along highways, roads, streets & so on, and no brown lamp illuminating unlit features: 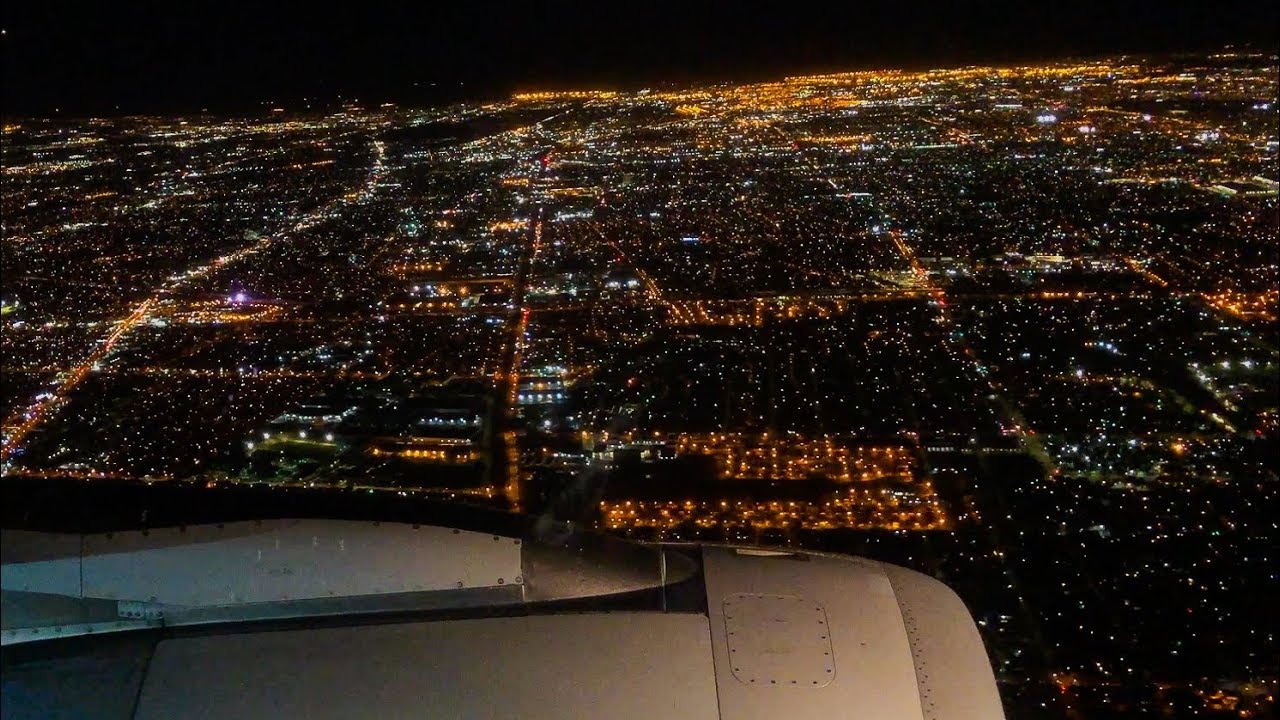 Yeah I agree… I just flew at night after the latest update and I have to say that this is a step in the right direction, although there are a few more that needs to be done.

Perhaps another topic in “bugs” section titled something like 'Night lighting issues after update 7"? This one is getting too big and I think we need a fresh “votes” so devs can see more accurately community feedback specifically after update-7.

I am not sure if again a such a general topic could help because we all going to write about each and every single issue and we will soon get to this point as with this thread.

You could update the title to refresh it and make it more pertinent for update #7, like:

And then add a link in the 1st message to my post above (not because I’m on an ego trip but only because it is the sole one trying to gather some of the most relevant posts together), at least while we gather the other relevant posts (I’ve surely missed some): Terrible night lighting after patch 5

There are a few other night lighting discussions with specific titles like “double lights” or “floating lights” etc… (making these on my own shorter for illustration only) and I believe the number of votes on this discussion must be preserved, because it looks like the voting system is still key to get a chance to be eared.

You could update the title to refresh it and make it more pertinent for update #7, like:

And then add a link in the 1st message to my post above (not because I’m on an ego trip but only because it is the sole one trying to gather some of the most relevant posts together), at least while we gather the other relevant posts

I am not discarding this discussion, I think that it was very constructive but I am not sure if we are going to get any solid results from the devs due to its length.
I could try what you said and hope for the better…but again not sure…
Let’s see if this will make any difference …

Even though I see your point, I have to agree with CptLucky8 that we should preserve this discussion for the wealth of information in it. The night lighting still needs a lot of work to bring it back to the quality it had when we purchased the sim (I’m referring here to the VFR flights).

I have changed the topic of the thread ,which should be kept as a great ‘‘database’’ for night lighting, and updated my very first post, even though I still think that at this point separate individual threads could get us better results…

I’m just wondering whether we should get someone that can give direct input to devs to gather suggestions from community what can be done in regards of night lighting, listing it from the easiest (the one they can easily implements and release in next small update), to more of a long-term features to spruce up the night lights.

From Update-7 IMO, I agree with @Grinde81 for stuff that devs might be able to quickly implement, such as:

In the longer run, more “light/lamp classes” can be added to differentiate between normal main street lights, to highway/motorway lights. The latter should be placed higher, and spaced further between lights. Halo can also be added to light point with varying intensity.

(Edit / add): Another “lamp class” that can be considered by Asobo in the medium / long term is for vehicle headlight / tail lights. This class of lights should be approximately 1 metre off the ground, and not omni-directional (headlight shining to front, tail lights to the back). This can create illlusion of traffic at a distance, and the amount of lights should be randomized along the roads. The alternative would be to actually use the headlights/tail lights of vehicles in the game (like X-Plane).
Currently it seems to me that devs trying to add illusion of vehicle lights by adding more light orbs per “light point”. The thing is, this is not randomised and caused roads to appear like laser light lines in the distance… Not to mention the weird dots of red lights along the freeways etc when viewed from above.

And the continuous strings of lights at distance, I think it can be partially fixed once they fixed the tree LOD or increasing the view distance of trees and buildings. Trees and buildings can block those lights and create more randomness in the distance.

Would be great if we can get one of the devs to come here and tell us what they would prefer… Continue this thread, or start new one.

My concern is right before update-7, this thread was already not included anymore in their “bugs list”. Will that continue to be the case if we keep discussing in this thread?

I have to show you something. I have installed GeForceExperience and there is an option called Freestyle ,where you can apply filters while you play.

This is without Freestyle 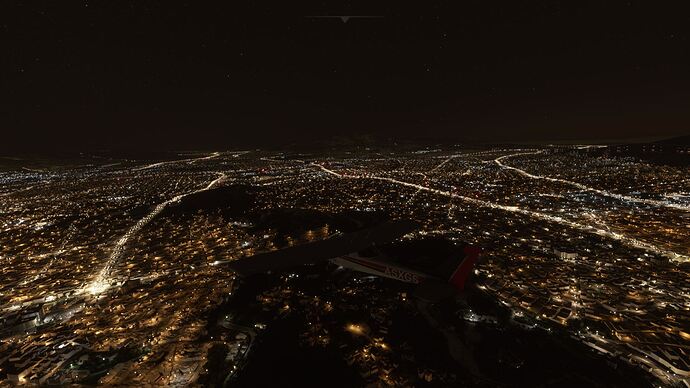 And this one is with filters applied, reduced clarity, HDR, sharpness etc. 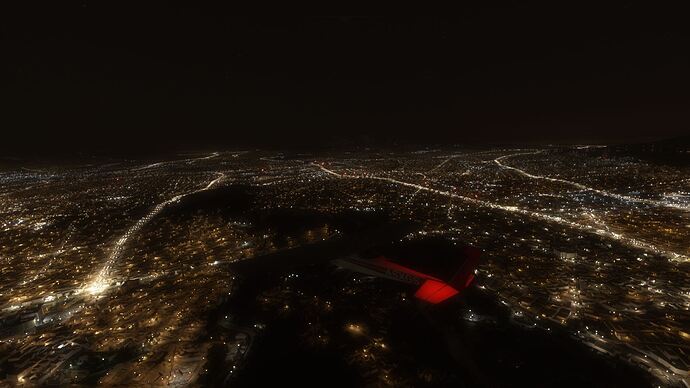 Reduced clarity for example seems to be reducing the effect of the light bulbs.In the screenshot it looks more blurred but while you fly it looks better to me.

This is my first tweaking attempt. For me it seems that it doesn’t need much from the devs to tweak it and get an improved more realistic look. But again this is my opinion…

Great point! I can second this having an IRL pilot license. For those of you that haven’t taken a flying lesson I’d definitely recommend a night flight from the cockpit. It’s an awesome and surreal experience looking out over the sea of lights. Depending on whether or not a moon is present it can get incredibly dark.

I too am not the biggest fan of the night lighting update but it seems to be moving in the right direction- we just aren’t there yet!

Well I wouldn’t call this real life because it was recorded with a very bad camera or bad camera settings. It’s as removed from reality as the east from the west. And honestly these devs should stop leaning towards the camera but should lean towards the human eye. That’s more authentic.

Reduced clarity for example seems to reducing the effect of the light bulbs. In the screenshot it looks more blurred but while you fly it looks better to me.

Definitely a nice touch giving a more organic and tuned appearance to it all. I especially like the “glow” around bright areas, as well as the softening of the current overly bright & highcontrast “ground-splash”. After trying out some different settings, the current/default MSFS definitely looks overexposed and oversharpened.

I highly Highly recommend people trying out Geforce Freestyle as per @ScenicAtol3300’s find here
Really cool to be able to tune quite a lot of the night appearance in real time.

Reducing Clarity definitely reduces the “pop” of current overexposed streetlights, and also getting good results tuning HDR toning, color vibrancy and temperature as well as shadows/gamma. Will use this tool a lot in the coming days, especially handy for those not having a black belt in photoshopping.

(edit: a good tip is to regularly turn the Freestyle off & then on again to “recallibrate” your eyes, since it’s very easy to wander off too far when tuning like this.)

Well I wouldn’t call this real life because it was recorded with a very bad camera or bad camera settings. It’s as removed from reality as the east from the west.

I believe the context of that comparison was the pre-patch lack of visible lights for medium & long distances, plus the excessive use of the “Sepia Mask”, illuminating hole cities daytime texture in a uniform brown glow.
While after the patch, streetlights are visible at much longer distances with highways and street-blocks finally visible, and the ground glows less, just like in real life, and in that video.
So for the sake of comparing those features, the video works fine.

Urban areas doesn’t glow in the dark IRL like it did before the update(and still do to some extent)…
You’ll see lamps, and when close enough (or enough lamps close together) you’ll see the effect lamps have on the ground. Everything in between will be dark.

I think that heavily depends on the weather. If there’s a cloud base above (or moisture in the air), urban areas will definitely glow.

@InhumanCash2369 If I understood u, what u are telling is about the glow of lights in the urban areas and what he is referring to is the “ground glowing in the dark” and not the glow of the lights in the urban areas. The whole ground illuminated by an uniform brown sepia texture (the sepia masking) instead of being dark irrespective of whether lamps are there or not to illuminate the ground is completely unrealistic and that is what he is referring to.