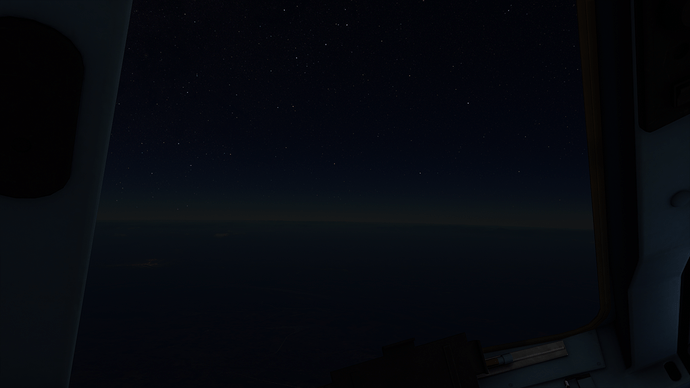 I guess I’m confused…there will always be a little light due to the starts and moon and such. I don’t see the problem from that picture…

Depends on the moon, half moon? Yeah. No moon? Nope.
I think lightning is pretty on point atm

What is your altitude there? You are much higher than your normal eyesight viewpoint standing on the ground. If the sun sets at 9:30 pm, you will see light at the horizon at 5000 feet because you are higher than you normally would view at 9:30 pm, probably for quite a while, as in at 10 pm.

Light pollution from a far away major city? I flew from DC to Ocean City, MD last night and as I got further east, the sky lost that glow, and in the end was pitch black. It was pretty cool, I just wish the taxi and landing lights were a bit more powerful

Yes is far away from the city (HCM) and is inbound Cambodia way to BKK.

Is FL360. so is normal right, let me check what is the sun sets in HCM…

Hi this has been a common problem/bug. I’ve experienced the bug as well, it really should just be pitch black. I suggest reporting it to zendesk as many others have as well. Reporting to Zendesk will increase the likelihood of this big being fixed.

I found a couple of red horizon lines now over Spain. One was related to the moon. But the other one… I suppose to the sun. But the sun set a few hours ago…

I see… thanks. but if other simmers, and gamers have been reported , i wont repeat is to zendesk again to avoid mess…

Nope, you’re supposed to report as much as you can. More bug reports will result in the bug being prioritized and may result in the bugs being fixed faster. It serves as a kind of bug tracker.

NOTED… I will do that… thx for your instruction.