NOTE This topic is Somewhat mentioned in previous posts that are now more than a year old and must be considered buried and dead/invisible. And so this post is NOT to be burried together with those “dead” threads. (they died because they were too early and more pressing changes and fixes where needed at the time.

Lets give it up to the Night Sky in MSFS 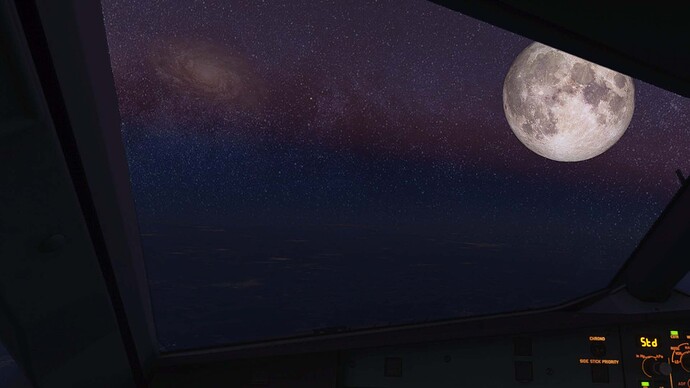 The following post is my own opinion and that alone, I am well aware that to others the sim and the night sky is perfect and needs no work what so ever, and I respect that as I respect and acknowledge that flight simming in particular is a hobby where no two systems or preferences are alike… This is also why I strongly advocate for settings and adjustment additions rather than hard changes (one size fits all) policy. That being said, I cant be the only one who has an issue with the extreme stars in the sim? Or the size of the moon?? It is at the point where I prefer to avoid night flying when possible.

The night sky in MSFS could use some SERIOUS and well deserved rework. From what I understand it is still a simple texture wrapped on a rotating sphere, i.e. a quick build during the early development of the sim.
On a small 2D desktop the issue is not as noticeable as on larger setups or specially in VR. The shear amount of visible stars already at early dusk is just too ■■■■ much… And is to some degree immersion breaking or a nuisance at best.

Not even when living on Svalbard, (pretty much as far as you can get from civilization and light pollution) have I seen a night sky so bright and populated with stars as it currently is in MSFS… I can make out constellations that would normally require a small telescope to make out… I know it might be an artistic choice from the devs side to create some WOW factor for the casual gamer, but as far as “true to life” or “realistic” it is waaay off.

So I hereby suggest creating a “night sky star apparent magnitude scale slider” or other type of setting to the sim so that those of us who would like a more calmed down night sky above the clouds can set it as such.

Thank you for your time and hope you can spare a vote to get this on the radar of the devs.

Please do not create duplicate topics per the Code of Conduct. Even though a topic is old, posting to it revives it.

When creating a bug report, there is a template provided. Please do not delete this template.