I made another one on MSFS, this time using Unreal Weather (Live WX was even more stable). 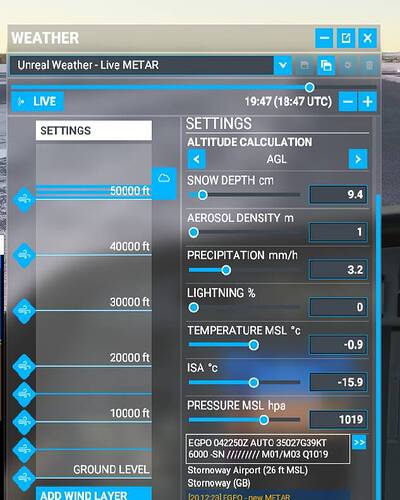 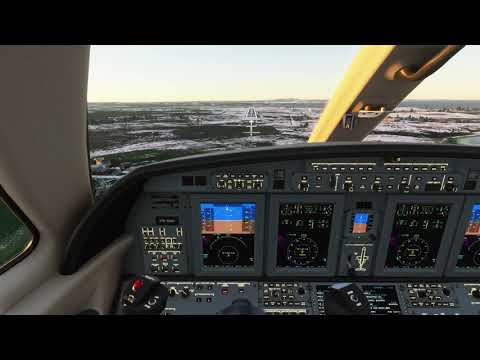 I took out the TBM from LFMN with a preset weather of “DNBOF - Windy”. I turned off “Camera Shake”. I play in VR btw.

I took off, did a circuit and then landed. I see what you mean. Whilst the aircraft wobbled around like mad, this was just seemingly an illusionary effect as the aircraft was actually directionally very stable. If I ignored the “wobbling around”, I didn’t really need to make much adjustments when landing at all and my flight line seemed rather unaffected.

Haven’t flown with wind and turbulence since quite some time and apparently things have changed over the month.

I have to confirm that turbulence presently has not much to do with real world turbulence.

I think this could be easy to improve. On XP11, I made a LUA script to increase turbulence proportionally to wind speed as you get near the ground, below 2500ft AGL (roughly the usual boundary layer). If you use XP11 with a real weather addon, such as NOAA WX, which does basically the same thing as MSFS’s Unreal WX addon, there isn’t much turbulence either. My script improved it.
If Asobo could strengthen the link between turbulence and wind speed or even add a random small gust with a slightly different direction (say 10° off), I think we could get a good result.
In sum, we miss slight varying winds or gust with real weather.

I made a LUA script […] If Asobo could

Quoting you like this is best describing one of the key missing element in the game to me.

I took out the TBM from LFMN with a preset weather of “DNBOF - Windy”. I turned off “Camera Shake”. I play in VR btw. I took off, did a circuit and then landed. I see what you mean. Whilst the aircraft wobbled around like mad, this was just seemingly an illusionary effect as the aircraft was actually directionally very stable.

This resonates with what I’ve been observing (video included):

[BUG/FEATURE] FS2020 is breaking the VR golden rule: don't move the camera, the user is

Still an issue for me, just no turbulence, absolutely nothing in current Malaysia/Singapore CBs in live weather, not even in light aircraft.

Just read your topic, it’s brilliant and explains very well what isn’t going well in the sim (along with lack of thermals or fluid dynamics basically…)

Still an issue for me, just no turbulence, absolutely nothing in current Malaysia/Singapore CBs in live weather, not even in light aircraft.

I noticed this week in the FBW 320 (haven’t flown other aircraft) that sometimes the plane bumps a few hundred feet up or down, for example when at FL350. Not sure if that is turbulence or a bug with the fbw mod.
Real airplanes always get a little bumpy when you get into the clouds. Would be nice if Asobo could actually make that happen instead of showing it off in fancy marketing vids without actually implementing it

Real airplanes always get a little bumpy when you get into the clouds.

Depends on the cloud type.
Except in cumulus type clouds you usually don’t ‘automatically’ experience turbulence.

… However I really appreciate the turb around the relief (even better dynamics than XP/Active sky) same for some turb that feel better and realistic especially in final (touch down is weird, birds behave weirdly on the ground, maybe ground fiction issues but weird which makes TO/Landings weird as well no matter the bird/mod you fly imo… But a part of the turb based on my “memorie body” from years of experience in the skies give me sometimes better feelings than XP/Active sky maybe because of many points of the surface on the bird that are affected by the flight model (I’m thinking about the JustFlight Piper, feels real in many ways, (I only flew the basic flight school one PA28 not the JF model) …
Anyway still waiting for better dynamics, airflows mass movement, convective winds in CB/TS, thermals, realistic severe weather conditions better than only eye/candy thunderstorms etc etc… as I mentioned my wishes here so many times and put my vote of course… Hopefully there will be more votes, hopefully the Sim-update that’s coming this month will bring good surprises out! Wait & See…

Here is a real life story I just read about microbursts and turbulences: https://www.reddit.com/r/flying/comments/n7q9x3/hate_to_be_a_story_topper_microburst_in_an_archer/?utm_source=share&utm_medium=ios_app&utm_name=iossmf

That it total science fiction is you use MSFS as reference.

Microbursts are very, very dangerous… and elusive if it is a dry microburst. Just a slight weather tip for any potential real life pilots here - if you’re flying on a very dry day but thunderstorms are still forecasted (which is a little contraintuitive because thunderstorms need moisture, but that can be evened but with a particularly strong lift factor) be VERY careful. Microbursts are formed by evaporative cooling… all those ice particles, hail and rain drops are evaporating in the very dry air and because cool air is heavier than warm air, it descends rapidly. On a very dry day, all the precipitation can evaporate out completely and you’re left with an insanely strong microburst you can’t even see properly.

I’m not a pilot but I work at an airport (as a meteorologist) and one time a rather weak cell produced an insane microburst. It went from 20+ km visibility to 200 meters visibility in the matter of two minutes. That’s how quick those are.

Sorry for the OT, I got a little carried away.
I really hope those are things we will eventually see. Right now you can fly with a Cessna into a cumulonimbus and if you don’t count the icing, you are absolutely fine… which is wrong, lol. It would be really cool flying around hazardous Cb clouds in the A32NX and planning what to do next.

The reason we have no or very little cloud/weather turbulences is because everything has been limited, due to complaints from casual players don’t understanding aerodynamics, combined with bugs.

Asobo wants to improve it first and add different visualizations before they give us more realism.
All of the interview parts and informations can be found in my thread right here:

Asobo wants to improve it first and add different visualizations before they give us more realism.

Guys you’ll tell me but it looks like updraft/dowdraft feel stronger than before imo, same for orographic air mass/winds around and above the relief since the last update/hot fixes, am I wrong?
…
Yesterday I was flying the JF PA28 at LFCB, spot where I flew the Robin DR400 for only 3 days around in real (I’m not qualified for VFR flight operations in moutainous area only VFR/IFR but you know things happen off the beaten track sometimes in aviation if you don’t put yourself in a situtation that you don’t want to get in!) Anyway this very short experience of flying in mountain was enough to remember the kind of turb I’ve been through especially when it strongly affected my airspeed because of strong winds due to aspirities/relief in particular, which was exactly the case somehow yesterday in MFS2020.
At FL095 ISA+ 13 (less air density, 3 pax on board 50% of fuel, so that heavy bird at high altitude not really recommended for the sake of safety but just to test in the sim), I almost reached VSw from around 110 kt to 83 kt (no flaps, heavy bird) because of downdraft that put the airplane in a such a lost of 700 ft and indicated airspeed in a very short time combined to a “high” OAT at this flight level; guys again it felt so real as never…

In MFS2020 turb engine start to be very interesting because of many variables turb that I don’t have in XP/Active sky eventually if I do compare in an easy way, in which the Turb engine feels more like a “binairy system” somehow" maybe more accurate live weather than MFS2020 thanks to Active Sky but not so many variables about the turb (I’m not an expert at all in dynamics/physics but that’s the way it feels on my side based on my real body memories/experiences in the air)…

Anyway, did the devs open the doors, step by step of the limitations concerning updraft/downdraft/convective winds? I have no certitude just feelings… or is it because of the last update/hotfix that collects more weather data including air mass movement/winds, no idea but it feels more realistic as never imo, give me your feelings/impressions/ideas which is the topic by the way.

I’ve already voted, and for all the votes that concern the weather/dynamics/physics by the way.
Let’s Wait & See for the next Sim-update!

Yesterday the curiosity of testing a flight with severe weather conditions hit me, I used the cesna Longitude, and I realized that even when entering dense clouds, the aircraft practically does not suffer stimuli from the external environment, it is very strange, because I remember after being released it very well simulated severe turbulences.

Can someone tell me if there was any change in the meter?

Depends on what you mean by “storm clouds”. If they’re cumulonimbus, sure, you should get turbulence. If they’re stratus clouds you won’t. Do you mean thunderstorm clouds or flat, dark grey clouds?

They had to dial those back down, because people were complaining about planes being rocked around in severe convection. :/.
As far as I know, they are working on certain “systems” to “educate” players on downdrafts and updrafts and all of that, and only THEN they will increase the up/downdrafts again.
Let’s hope it’s sooner rather than later.