No, I reduced my resolution from 4k to 1k, and reduced level of detail and textures to 10%.

Thank you for this, much appreciated!

I installed Geforce Experience and applied optimised settings as you suggested, and still regular bad stutters:

Hopefully, SU10 will minimize the stutters.

Here you go, but it doesn’t matter what the settings are, it’s appears to be an issue with the code. 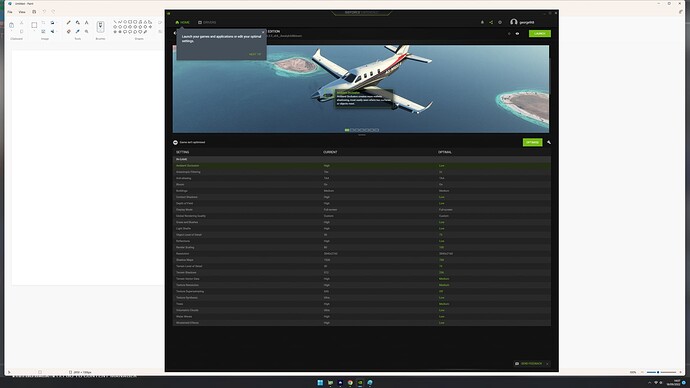 I get bad stutters every 30-60s, in all sorts of situations. It’s the one issue I want fixed more than anything else.

I used to get this a long time ago. Had absolutely nothing to do with the sim itself but third party mapping software which ran outside the sim and updated every 60 seconds. The sim for me using SU9 doesn’t really have stutters.

It’s what people add over the top of there system (and that can include unoptimised 3rd party planes) which causes the stutters as they can overloaded the CPU and caused a bottleneck with the GPU.

Sure you can cause stutters increasing CPU heavy features in the sim itself but it is possible to get the sim running fluid even for airliners but 3rd party ones, you’re on your own quite frankly.

The only mods I have are airline liveries.

Stutters are even happening on bush trips with low CPU load.

Could you try checking after clicking Optimise on Nvidia Geforce. As I can see too many settings are higher than vendor recommended list.

I did. The values in green are the ones that were changed by the tool. I then launched the game and checked these lower settings were applied.

I noticed the bush trip stutters happen exactly every 60s.

After a quick search I saw that this is due to the autosave.

Which autosave are you referring to?

It’s getting an interesting case of stutter which happens every sixty seconds. There’s something out there that I will be much glad to help you figure out. Any addons, anything that fetches your CPU to spike up? Did you test with any native planes?

No other processes, nothing to do with planes, third party content, CPU, GPU etc