No terrain visible on Xbox Kodiak 100 with Working Title G1000

On Xbox, no terrain visible on the map of the Working Title G1000 NXi.

On the MFD, centre screen or the synthetic vision on the PFD, left/right screens?

This is on the center screen, the map screen.

The synthetic vision is ok on the other screens.

happened to me first flight, I jumped on another nxi plane then back to the kodiak and the topo map was there

Thanks
I tried but unfortunately it doesn’t work for me…

On the MFD, you should have the option named “Map Opt”, click that button.

On the next screen you should have the option labelled “TER Off” which toggles through different base maps, one being “TOPO” 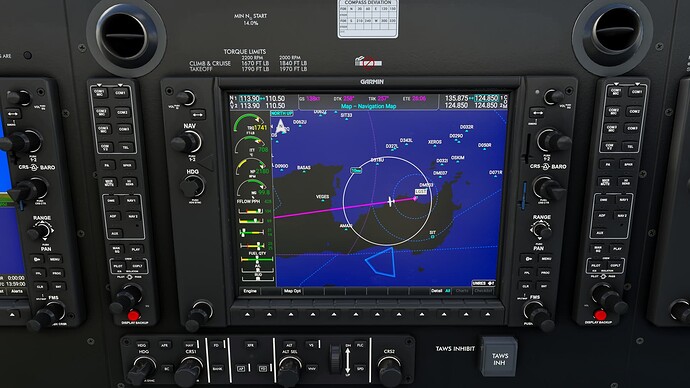 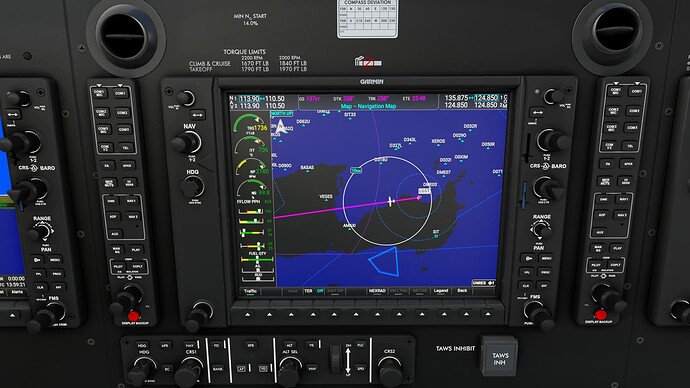 I like the package very much but I’m having a couple of issues with the Kodiak on XBox. I have tried quitting MSFS completely and restarting the sim.

The first is the 3 center MFDs are all very dark and I can’t seem to find a way to adjust the brightness: 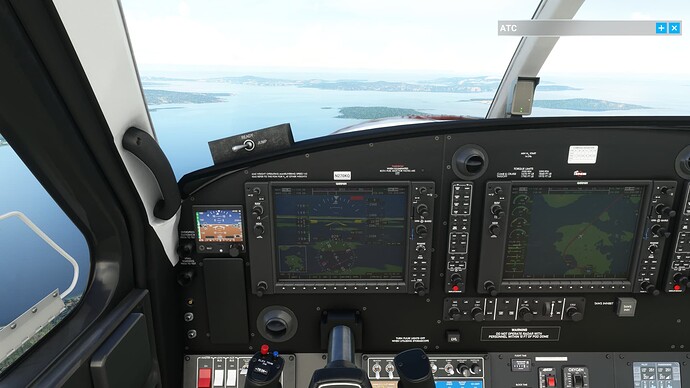 The second is I can’t seem to close the Skydiver’s door once it’s opened. I tried the switch on the dash and I tried to find a hotspot in the cabin. I can find the “Door Open” hotspots all along the arc of the door after it’s raised but they don’t toggle to “Door Close” like they do on the other doors: 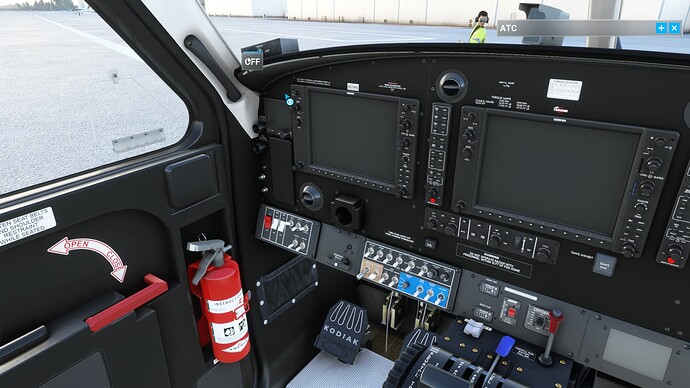 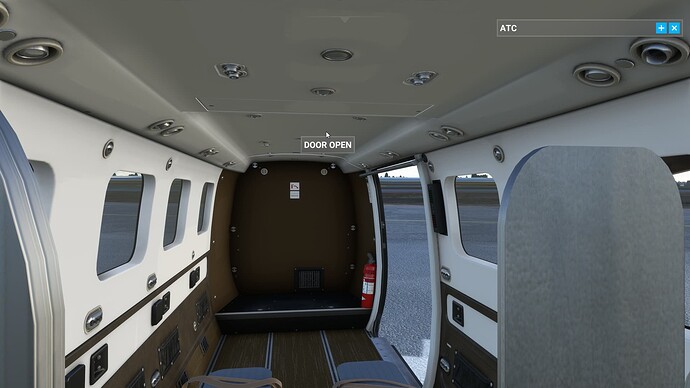 Anyone else on XBox having these issues and/or suggested remedies?

I think I’ve found the work around for the brightness. You press the “Menu” button on the PFD then press the “Ent” button. The G1000 then switches to AUTO brightness.

Pressing the CRSR button does not seem to take you back to the Setup Menu. However, clicking another function then clicking the Menu button again does seem to remove those extra menus.

Just curious now if I’m the only one who’s using the stock G1000 and needs to configure the brightness before each flight? If not, them maybe a future update could set it to AUTO by default?

Check above and between the pilots’ heads for the skydive door.

As for the G1000, the solution is to adjust brightness using the menu on the display. Best to set it to auto.

Check above and between the pilots’ heads for the skydive door.

Thank you for the quick reply. All good now.

Enjoying this new addition to the hanger very much!

I’m having the same issue. Extremely annoying as most fun with this aircraft is doing cargo deliveries on short mountain strips.

Aside from the center mfd not showing terrain, I’m facing a lot of CTDs with this plane as well on Xbox.

to show topo map restart the flight when you hop in, as you load again you can set the topo map

I tried deleting and reinstalling the Gamin NXi module but it did not fix the TOPO problem on my Kodiak 100. I have the xbox (disk) version of MSFS.

So far, i have been quite disappointed with the Kodiak and I have switched back to my Cessna 208B.

It’s a shame you feel that way about the plane. Yes, I’m getting the CTD’s and loss of Terrain on middle displays too- I’ve uninstalled the NX and gone back to the default G1000 so I can fly the Kodiak. Now, the Kodiak takes time to master - one of the reasons for that is that it can manage two very different landing types - this article is really fascinating:-

After logging thousands of flight hours in iconic Howard DGA–15s beginning as a teenager, California rancher Bruce Dickenson developed his own ideas for making the relatively fast and powerful airplanes from the 1930s and 1940s even better.

To me the Kodiak flies very realistically but needs a lot of investment to start to understand how to fly. Once I’d put in 20 hrs of island hops I started to get better landings and take-offs. Whilst I love the NX in the Cessna 208, to me the flight model doesn’t feel as real as the Kodiak once you’ve experienced it.
I know why you’re torn - but for me personally, I’d rather uninstall the NX to keep my Kodiak in the air, and hope the issues get resolved soon.
I’m just trying to persuade you not to give up on the Kodiak - I think it and the BN2 Islander are the best two planes we’ve got for the Xbox…

Thank you so much responding to my post. I am a newbie — this was my first post so I welcome any suggestions that you have.

I bought an xbox series x to run msfs. I have been “learning” msfs for the past 2 months. It seems to me that many features in the xbox version of msfs have been removed for performance reasons. Also, unless I am missing things, there is no option to choose addons, or to choose older versions of the G1000 addon software.

Also, i bought the xbox disk version of msfs. I get the sense that this may be a different version (from the downloaded, cloud version). For example, up to the latest update, a disk icon (a circle with a dot) appeared beside the msfs icon on the xbox. with the recent update this disk icon has disappeared. I can find no microsoft publication explaining things.

I wish Microsoft would clearly state what their plan is for the xbox version of msfs. Currently, there are many features that are lacking in the xbox version. Even so, I am enjoying msfs. As i bought the xbox to evaluate msfs, I will have to decide whether or not to incur the major cost of upgrading/replacing my PC if the xbox version does not live up to the original Microsoft hype.

If you have the G1000 NXi installed, go to your “content” manager and delete the NXi add on.

There are no add ons for the Kodiak. If you are looking to add passengers or cargo, you can do this on the flight map when choosing a plane. You need to adjust the weights.
Not all versions have passengers and/or cargo.
There are quite a few liveries to choose.

The disk version would only be different at the time you load it. Once you have installed various updates and content you would be the same as everyone else. MS keeps stating that Xbox and PC versions are the same except for some of the content that 3rd parties offers outside of the marketplace.

Enjoy and welcome to the Xbox club