Can somebody please provide input if the latest driver brings any noticeable differences in performance?

I think you’re asking specifically about VR (???) but I do not notice a single difference with the latest update from Nvidia.

Im getting 10 more fps with it, but that was only on a 10 min flight, I havent flown any further as of yet but I am hopeful. 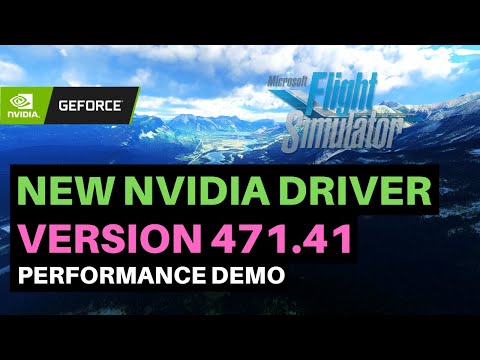 Here is some useful feedback.

471.41 is noticeably improved in terms of stutter - so much so that I could describe it as fluid. I have HAGS off & in the NVIDIA Control Panel I have Anisotropic sample optimisation ON, Negative LOD bias set to CLAMP, Trilinear optimisation ON & VR pre-rendered frames set to 2.

Interesting, I rarely notice any difference between drivers.

I’d suggest anyone to also compare with the Studio Driver (NSD).

I’ve found it to be more stable than Game Ready one (GRD) especially when entering/exiting VR, it seems to be delivering much more predictable and constant fps in VR to me (with HAGS OFF this evening, will try HAGS ON the next time), and it seems to also be slightly better to supporting motion smoothing with higher render res than with the GRD version. Not much but when pushing everything to the limit, enough to be on the other side of the fence sometimes!

PS: NSD version number used to be lagging behind but the last 2 were simultaneously released as NSD and GDR.

I just hope this is not placebo effect, because sometimes the difference between the 2 seems slim, but after having using this game in VR for so long, with so many drivers and version, I sometimes “feel” subtle differences by habit. Let’s hope this will help others too. (don’t expect x2 perf though

With VR, especially with motion reprojection, even 1 or 2 extra FPS can make a difference…

I might benchmark these with the previous release later if I get time.

In my GPU limited test scenario I get ~10% higher fps.

At his settings, I can’t read my dashboard without getting my face right on top of it (zooming). That’s ok for Barn storming or flying around without charts.

Depends on your hardware. I have similar hardware but use different settings. I can sit comfortably in a jet like the CJ4 and read all the small text on the displays.

July 27th it’s a big day for MSFS. We are expecting 40% + performance increases. I am just being patient and enjoying it as it is right now, knowing that the best is yet to come.

Best performing driver for me to date with the G2 and a 3090. Tested with re-projection on and almost zero stuttering, especially when looking out the side windows in the CJ4. That was always a stutter fest for me. I didn’t notice a FPS increase but smoothness is much improved. Running OXR at 100 and Render Scale at 100

expectation is the root of all evil

What HAGS and non-default NV control panel settings are you using, if any?