Please use this thread to post your impressions and feedback about the Savoia-Marchetti S.55 and S.55X, available now from the in-sim Marketplace for USD $14.99. The bundle includes both variants of this unique aircraft. For more information about this historic plane, please see our feature editorial here.

Who’s the developer of this plane? Carenado, MS,…??

This plane was developed for Microsoft Flight Simulator by Mike Johnson. Mike recently joined our Dev Q&A livestream to talk about creating this plane. You can watch Mike’s interview at the link below. 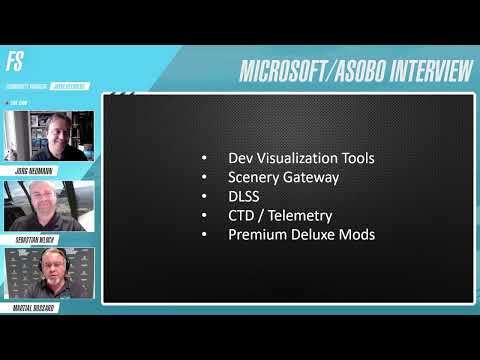 There is an aircraft manual for this! Will get it uploaded as soon as possible to Aircraft Manuals - Microsoft Flight Simulator as soon as I can.

I cannot agree more. I’m feeling the flying boat is a nearly silly concept with the sim’s current implementation of them.

It is odd, then, that the last two releases are flying boats.

I really want to be excited by them, too.

Just spawn on an airport near the lake or ocean you want to take off from and then use slew to place the plane in the water where you want to start it.
Sure it’s not ideal, but it’s a viable workaround.

There’s also a map addon where your can teleport your plane whereever you like without using slew: 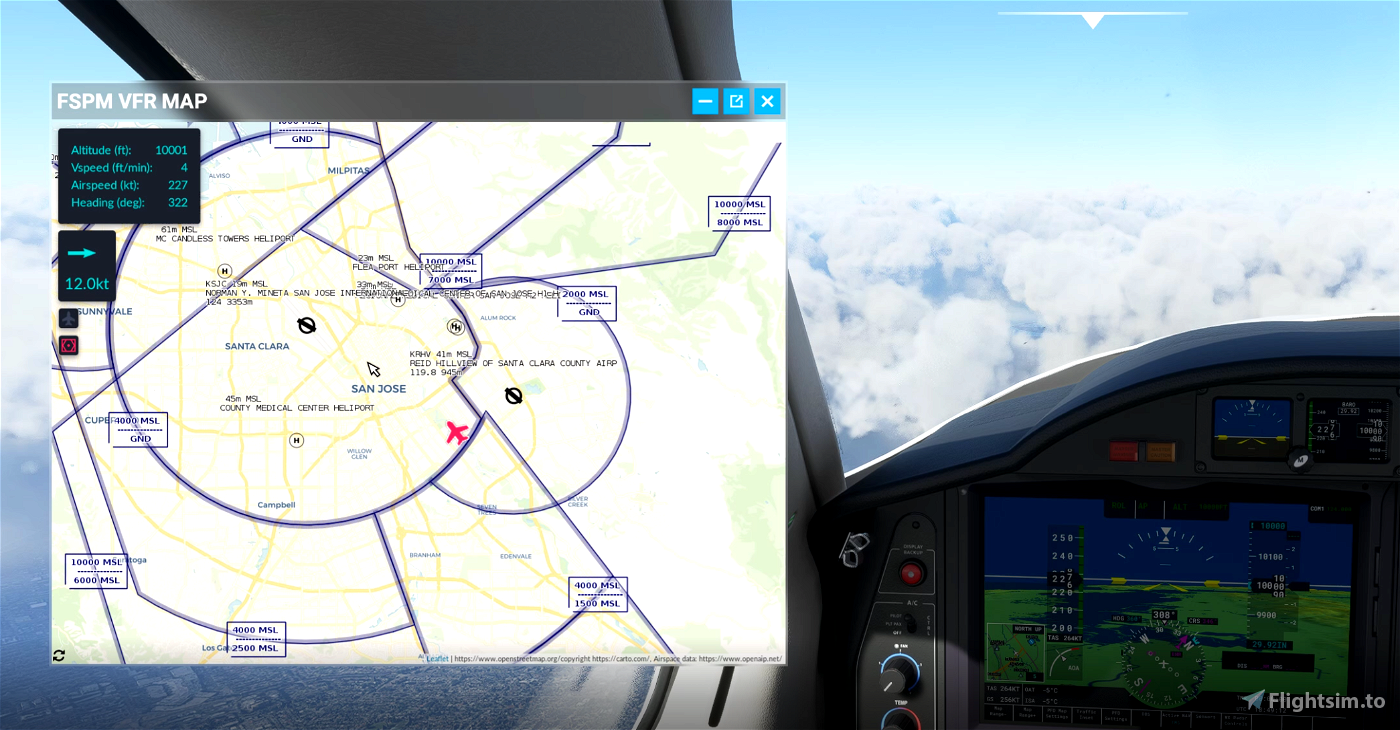 ✓ FSPM VFR Map is a Microsoft Flight Simulator 2020 mod created by scelt. Download for free to enhance your experience in MSFS 2020.

it got broken when VR was introduced, but there’s a fix for that:
http://a5tr0.sk/this/fspm-panel-vfrmap-fix/

I, much like others in this thread, cannot understand why the last two local legends were flying boats with no option for wheels, like the outstanding Grumman Goose by Big Radials. At least you have the option to treat that plane as a normal wheeled land plane. Oh well, not like Savio-Marchetti or Dornier made anything BUT flying boats . Oh wait they made loads of interesting planes. Lets hope we can get a plane that can land at most places of interest on the map.

There are a bunch of seaplane bases on flightsim.to with docking spaces. In the Dornier Wal thread user Megadyptes linked to some of the European one. There is also plenty to choose from in Alaska/British Columbia.

For PC users there’s a fair few mods that add water runways with parking spots over on flightsim.to and on return to misty moorings site. Doesn’t help Xbox users though.

Asobo did add a bunch of water runways a few updates back but almost all of them come without parking/dock spots so you can’t start cold and dark. Bizarrely they also removed a bunch of non US water runways that they added a few patches later for some reason. Maybe a bad code merge

But yeah having two ‘local legends’ being seaplanes and then not having any Spanish or Italian water runways to take off from is kinda hilarious and sad. What would be great is if you could just select any bit of water on the world map and have the option to start sitting on the water there cold and dark.

Also it’d be nice if water handling wasn’t so bad. Asobo seem to think it’s fine though but I guess as there’s no (or extremely few) water runways with the actual need to taxi around on the water they haven’t actually experienced the pain of trying to steer a plane on the water when there’s even the tiniest bit of wind making you weathervane like crazy.

I love seaplanes but I didn’t buy the Wal and not sure about buying this either as the local legends have been pretty underwhelming really. I’ll wait for some reviews and maybe I’ll be pleasantly surprised but I ain’t holding my breath.

I am still enjoying the Ju52, sure it has some issues, but low and slow cruising is what I love in that plane.

Yeah, JU-52 is very good aircraft. Many variants you can choose from. Very different flight model.
Beechcraft Model 17 Staggerwing is also geat model.
I enjoy it too.

Now I am looking for some reviews for S.55

being an italian simmer myself, passionate about italian hystorical aircraft, I eagerly waited for the S.55 to be released and had to buy it immediately.

I have completed a couple of hours flying along Italy coastline near Orbetello, the town in the middle of a lagoon that was the start of the famous ‘Decennale’ Atlantic crossing of General Italo Balbo.

Hope this first attempt of mine to make a quick review for the community will be welcome!

The 3D model is very well detailed, with excellent use of PBR textures and bump maps that mimic very convincingly the surfaces of the airplane. The instruments in the cockpit are hystorically accurate (with italian labelling) except obviously the radio and gps equipments included to make navigation a lot easier.

Regarding flying and floating handling - the latter is surprisingly easy if compared to other MSFS hydroplanes, because the two engines blow air directly on the vertical empennages and hence an action on the rudders makes the airplane easily turning when afloat.

In flight, the S.55 feels very stable, with rather slow responsiveness to the controls (this ain’t an aerobatic aircraft) that feels realistic to me due to the mass distribution on this airplane (think at the upper-mounted engines and the two spaced hulls). An exception is the response to the pitch trim, immediate and feeling excessive… I am going to suggest the developer to reduce the pitch trim authority.

As last remark, the S.55 comes with 4 very long bush trips, aiming to recreate no less than the famous Atlantic crossings! Be prepared for hours of navigation along the routes planned by the brave italian aviators of the thirties!

Thanks for reading and
Happy Flights!

Yeah, JU-52 is very good aircraft. Many variants you can choose from. Very different flight model.
Beechcraft Model 17 Staggerwing is also geat model.
I enjoy it too.

Yeah I guess the Ju52 is alright. The Fokker was released in a blatantly unfinished state though. Seems Microsoft demanded it be released with the world update no matter what but perhaps they learned their lesson seeing how the S55 was delayed. The Fokker seems to be patched up to a somewhat decent level now though as I took the 3 engined vintage version up for a flight the other day and didn’t get the weird engine RPM issues I got on release. Didn’t get the Wal but I read that you couldn’t actually start it up properly under cold and dark conditions which put me off. Dunno if that’s been fixed.

The Staggerwing and Gee Bees aren’t ‘local legends’ but part of the ‘famous flyers’ lineup and they are pretty good, also they were done by Carenado who have been doing quite a good job with their MSFS releases in general so I hope Microsoft will be using their stuff for more of the famous flyers in future.

Any option to remove the GPS from the panel?

Is it just one model with the GPS or are there vintage and modernised variants like with the Ju and Fokker?

The two have slightly different cockpits and instruments (Jahu’ has open cockpit while the S.55X is closed by a nicely detailed metal structure well visible in the trailer), both are historically accurate though.

The only modern ‘concessions’ that I spotted are the radio device in Jahu’ and the gps in the S.55X.

I did not tried yet to remove or hide the gps (not thought about that), not being at the pc right now cannot give a definite answer.

@FivePeach767757 Thank you for your feedback, I’m glad you’re enjoying the plane! Your trim comment is noted. There was a last minute fix to the trim to make it work a little better with VR controllers and I think this changed the trim input increments unintentionally. It’s a little coarse, and this will be addressed in an update.

@blusopra Regarding the GPS in the S.55X, no it is not currently removable. The X was intended to be a sort of ‘flying restoration’ rendition, since there are no surviving examples of the type, and to offer easier navigation than the very spartan Jahu prototype. I understand some people prefer a more ‘original’ flying experience though, and I am hoping to include another version of the X in an update with only a comm radio, similar to Jahu.

Decided oh well what the hell and bought this. First impressions are pretty good. You can start it up from cold and dark no problem. Looks and sounds great. There’s a little starter motor or something you gotta turn on before starting the big engines and it makes a cute little putt-putt noise. It’s pretty neat looking up and seeing those big engines above your head. 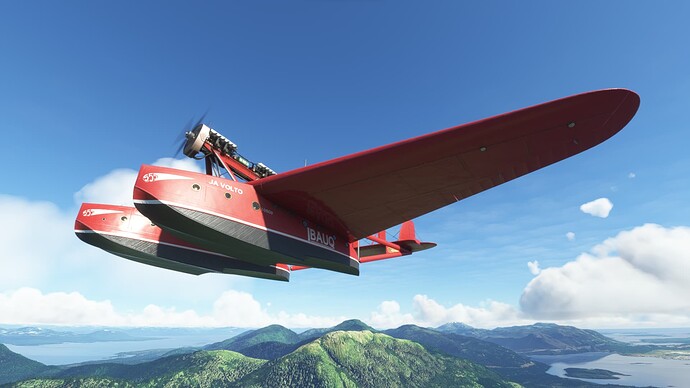 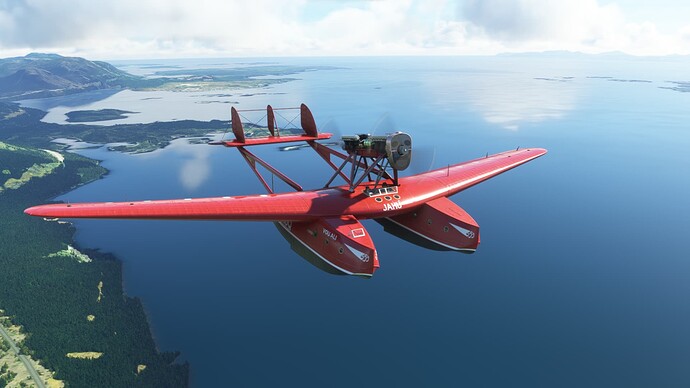 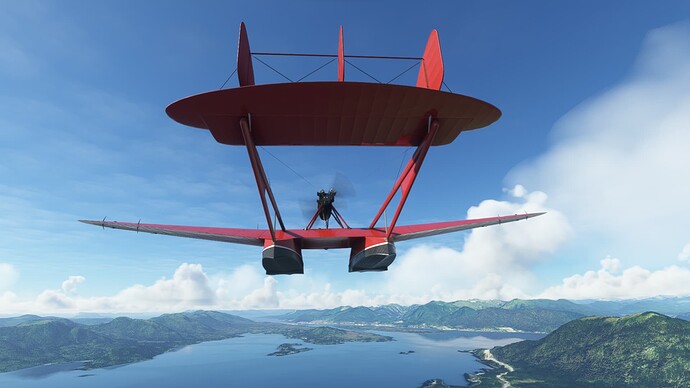 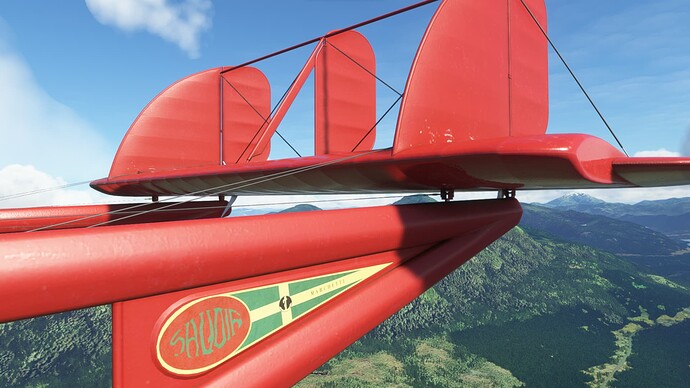 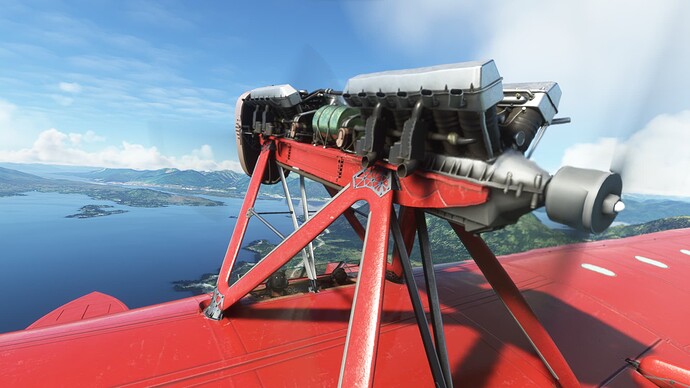 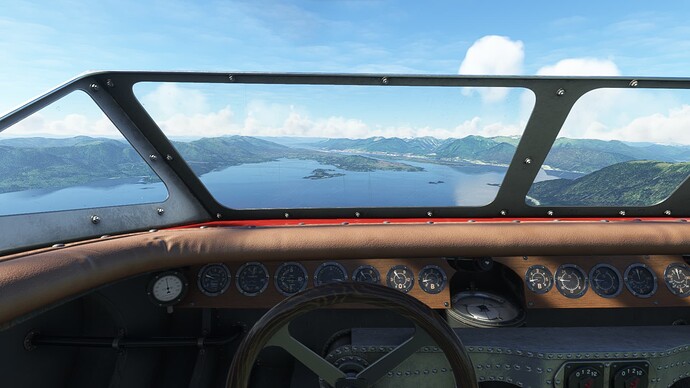 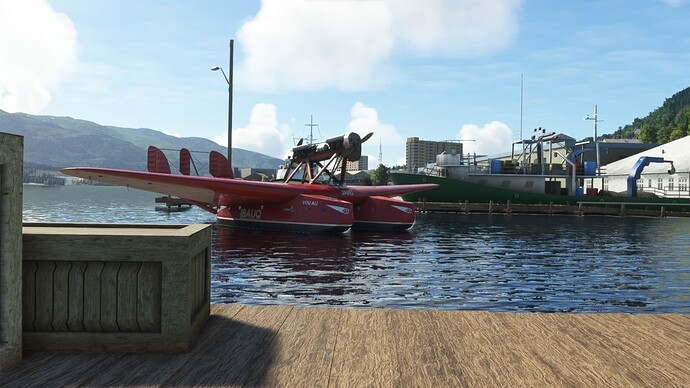 Not sure I’d want to be a passenger sat in the pontoons though. Are those fuel drums?! 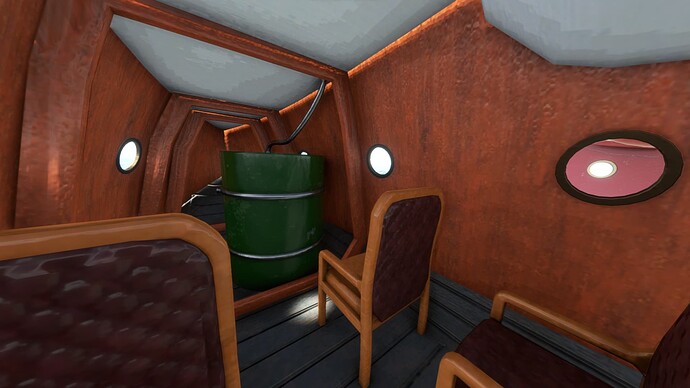 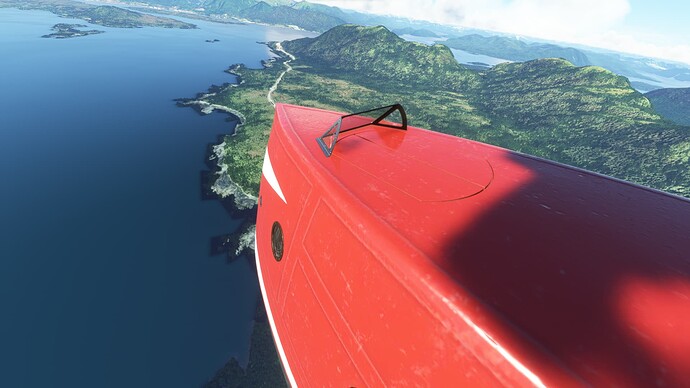 Not entirely sure what’s going on with this compass 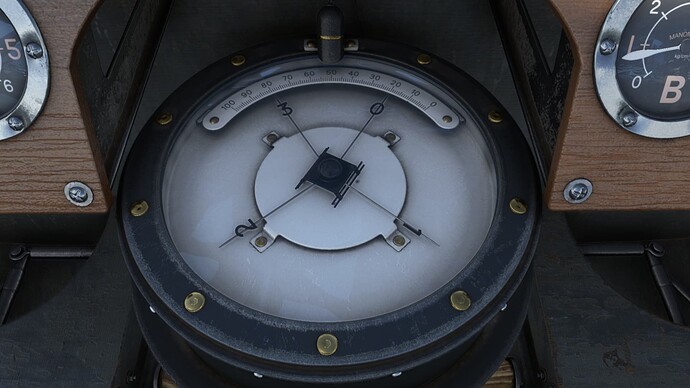 The radio in the base S55 model is tucked away on the far right and not even visible in the default forward facing cockpit view, gotta look over to see it so it’s quite unobtrusive. 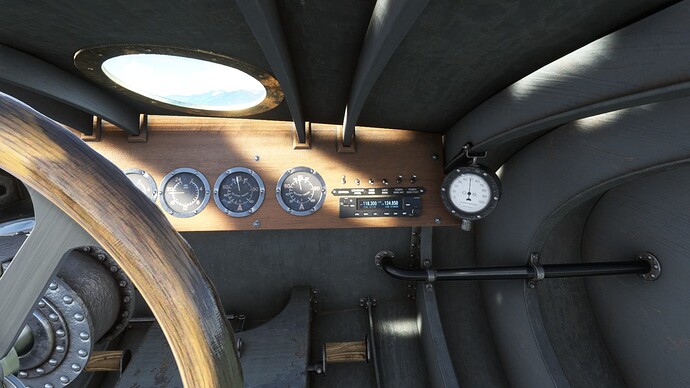 One small odd thing was that the magnetos were in the both on position when starting cold and dark. Would prefer them to be ‘off’ in that state! Although I just started a flight in the X modernised variant and the mags are properly off in the cold and dark state there.

I do like how the cockpit is different between the two variants, will be even better when you can remove that GPS 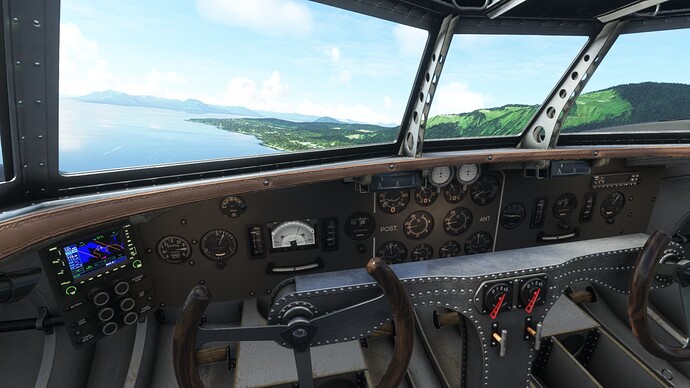 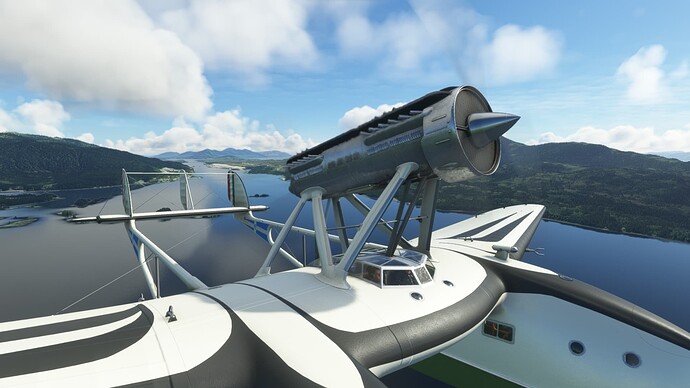