Off topic but it’s because \ is an escape character, usually used in code to say something like “don’t interpret the next line I type as code” (or DO in some cases.) The best way to type anything with a \ in it on these forums is to use backticks (`) to the left of the 1 key - around the line that has the forward slash.

has anyone done a flight on vatsim yet? i dont see the beech 18 as an option on simbrief

A messy workaround for that would be keep the association with the Goose, but then edit out the sections of the sound.xml file for this plane to not play the audio for the gear. You’ll still get the nicer engine sounds, but you’ll hear nothing when raising or lowering the gear.

I wonder if it would be possible to choose which sound pack to use for which effect?

to add a pilot and (for copilot remove 0//) in outsideviev,work only at repaints,add this to aircraft.cfg
on top of [FLTSIM.0] 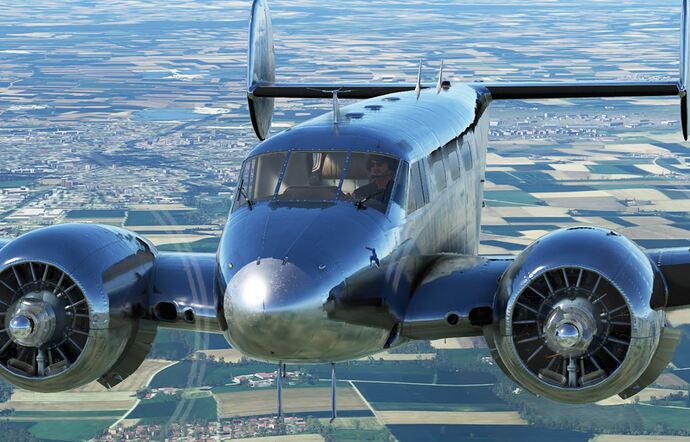 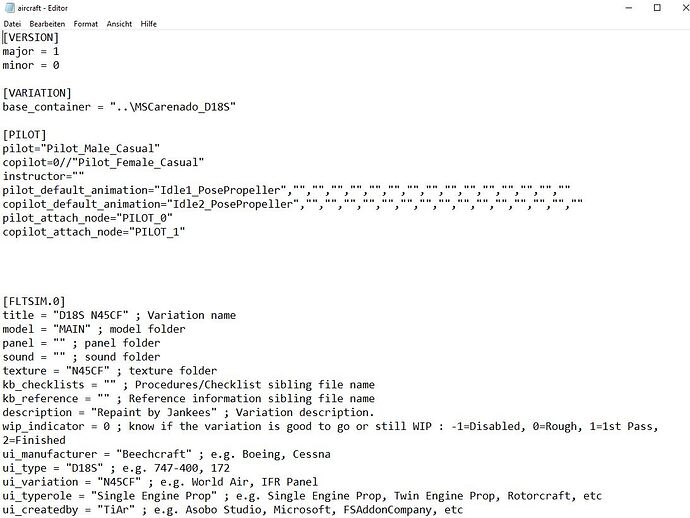 Pilots are not visible neither on PC?

I wonder if it would be possible to choose which sound pack to use for which effect?

Probably. But we’d need the original sound. cfg from Carenado. And that’s encrypted

I’m kind of late to this party I’m afraid, but I noticed that someone stated a few days ago there were no smoke effects.

I had not noticed this before and I wondered if any of the other MSFS marketplace aircraft had this nice touch, but so far no luck. Given that I don’t own many, I am assuming that this might just be a Carenado thing. Thank you, Carenado!!

like all cfg´s wat are need to upgrade or moding

that´s why i normaly not buy planes from sim marketplace,i hope they change this bad way to install…

For the life of me I can’t find how to turn on that red-tinted cockpit light I"m seeing others using. Where is that switch!? 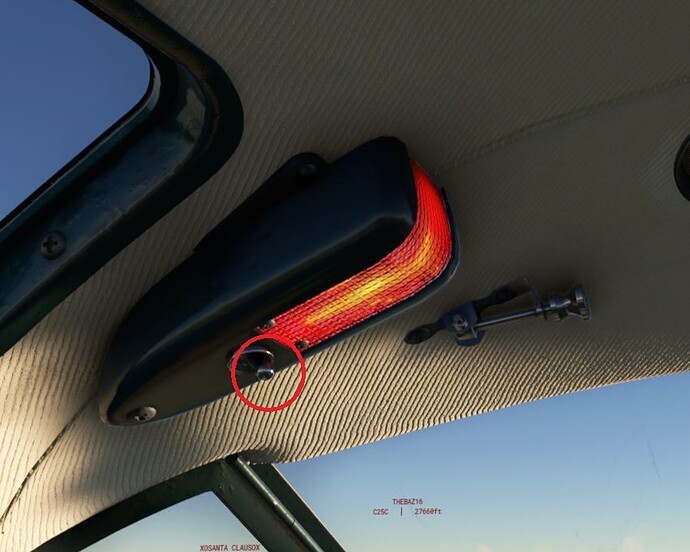 Looked everywhere but there. Thanks much! So cool-looking.

Is depressing the Nav 1 button above the GPS really necessary? It is just a speaker button and emits the Morse Code for the ILS. But it that necessary for the approach to work?

Is it possible to fly an RNAV in the Twin Beech?

Have Carenado indicated that the sound will be improved in an update?

For those who don’t have the Goose, another sound set worth trying is the one from the Beech D17. Most of the knobs and switches have sound and the engine sound is, well, much better. Only two negatives: engine sound is only for LH engine, if you start or just push the throttle on RH engine alone = no sound. But if you push the two levers at the same time you won’t notice. As a bonus you have the sound changing with opened or closed windows. And then, the low voltage warning on RH engine is sometimes not working mostly when you have mixture to full rich, but works as soon as you lean a little. I find this solution quit convincing in term of engine sound and the other sounds are good too; flaps, gears and so on.

Just getting my hands on the Beech 18 for the first few times, finally figured how to use the autopilot to follow my filed flight plan. It does not matter for me how i setup the right autopilot source, I need to press Nav on my Honeycomb Bravo, if I don’t, the plane won’t follow… Any ideas why?

And I just cant figure how to get the plane on a glide slope! I set up my localizer frequency on the GNS530 VLOC, VLOC mode is active (CDI button), the frequency is also set on the KX165 and the KN64. Yet, the KN64 never displays the NM, KT and MIN figures that seem to be needed for glide slope capture… Any ideas why is that? What am I doing wrong?

Have you read any of the previous posts here regarding the autopilot?

Do a search, it’s related to the landing lights switch. Turn them off.

Yes, you’re absolutely right about that - the.Beech 18 is a fantastic aeroplane but is well known as being difficult to land… it’s not one you can expect to just start pulling off good landings straight away - lots of practice required. I’d recommend finding an airport where you feel comfortable with the circuit and then practice flying round the circuit playing with trim and throttle settings until you start to feel a bit more comfortable. Even then, just when you think you’re starting to get a bit better, this aircraft will bite you! And I think that is exactly as real life.
Couple of tips - easier to pull off a successful wheel landing if you keep a little power on until you touch down. And don’t use auto trim- you’ll run out of up- trim for the flare if you do and guarantee a bouncer- I find that I need to set the trim on final approach to the point where if the yoke is left alone there is a very gentle nose down pitch to help settle the wheels on the runway. But it is a difficult aircraft to land well every time, not as forgiving as e.g., the TBM but very satisfying when you pull off a good one.