eposting from another thread as I believe we’ve been asked to put Xbox beta feedback in here.

In short, I’ve seen a really good improvement in performance and stability on Series X.

You’re lucky. Haven’t been able to get mine to load the sim since this debacle started. Prior to this, it was working great with few issues.

I hear you. I spent $2500 on a new gaming PC (had waited many months for it to go on sale with a Black Friday deal) specifically to play this game. I haven’t been able to play it in months due to workload, and now I’m reading that with SU9 it’s unplayable. That makes me sick.

On the PC there aren’t major issues like on Xbox. You should be fine. I’ve been using it pretty much everyday since SU 9 with the new 737 and now the Fenix A320, and haven’t had any issues.

Yes, I know some people have issues, but it’s not a widespread problem like the Xbox had. Give it a shot.

My advise would be: don’t get sick from reading other’s comments, but try for yourself. There are many people like me who have no issues at all. Try vanilla first to be on the safe side and start adding add ons later on if you want to.

Hello, My Microsoft flight simulator does not start after update. It turns itself off. I’ve done a lot of things but it still doesn’t work. I do not know what else to do. I think it has to do with my Microsoft account. Please I need help to solve this

So I fired up the ole black box after work and before I opened the SIM it was doing an update. I joined all the Insider stuff etc. last night. Last night and this morning I did a complete console factory reset and reinstalled everything. (in my case only the base SIM plus Deluxe and Premium). Thus far: I can turn on “online” functionality, Bing Maps and Photogrammetry and fly easily. However some minor stutters happen with Photogrammetry turned on so I keep it off. All traffic is either @ 25,30 or 50. Only what I listed currently is still giving an issue. Two have been eliminated.

Read the beginning of this thread.

Not fixed at all, loaded up the beta fix yesterday. Xbox Series S. Still CTD during the loading screen after ‘Press Any Key’. Haven’t been able to start up game a single time since DLing WU9…

The second flight was a success, no CTD. lets hope it holds… 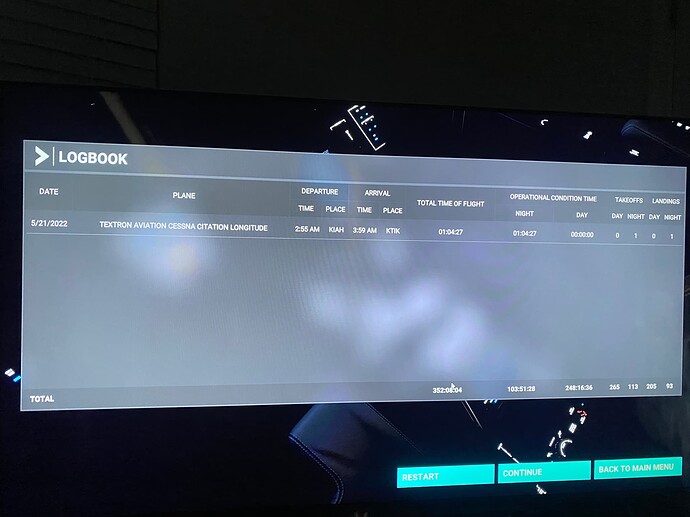 I’ve been trying to open the game since this morning, Australian central time 1030, get 4/5 through load and then dumped to dash. That’s after “the fix”! What the actual?

Whilst I’m here, are you looking at the logbook issue?

Hi, I have the above DEV UPDATE and come across a strange thing.

Are you on Xbox?

If so, there are many discussions regarding add-on airports and Xbox causing CTDs. This issue has existed for quite some time.

Please tag your post with #pc and/or #xbox. #xbox Are you on Steam or Microsoft Store version? Microsoft Store Are you using Developer Mode or made changes in it? No Brief description of the issue: Encountering consistent CTD’s at 3rd part airports, initially believed it was limited to one Airport (Impluse Sim Adeliade, so had done considerable testing, now found I am encountering the issue at other 3rd party airports. CTD occurs sometime between leaving the gate/parking spot and the runw…

The news that addons can be potentially tested prior to marketplace release is very positive. Obviously if the issue is one outside of the third party developer’s control (which I believe it is, I think it is a sim issue personally) then it won’t necessarily solve the CTD’s, but it’s a step in the right direction.

Which update is available? A patch to fix this launch issue?